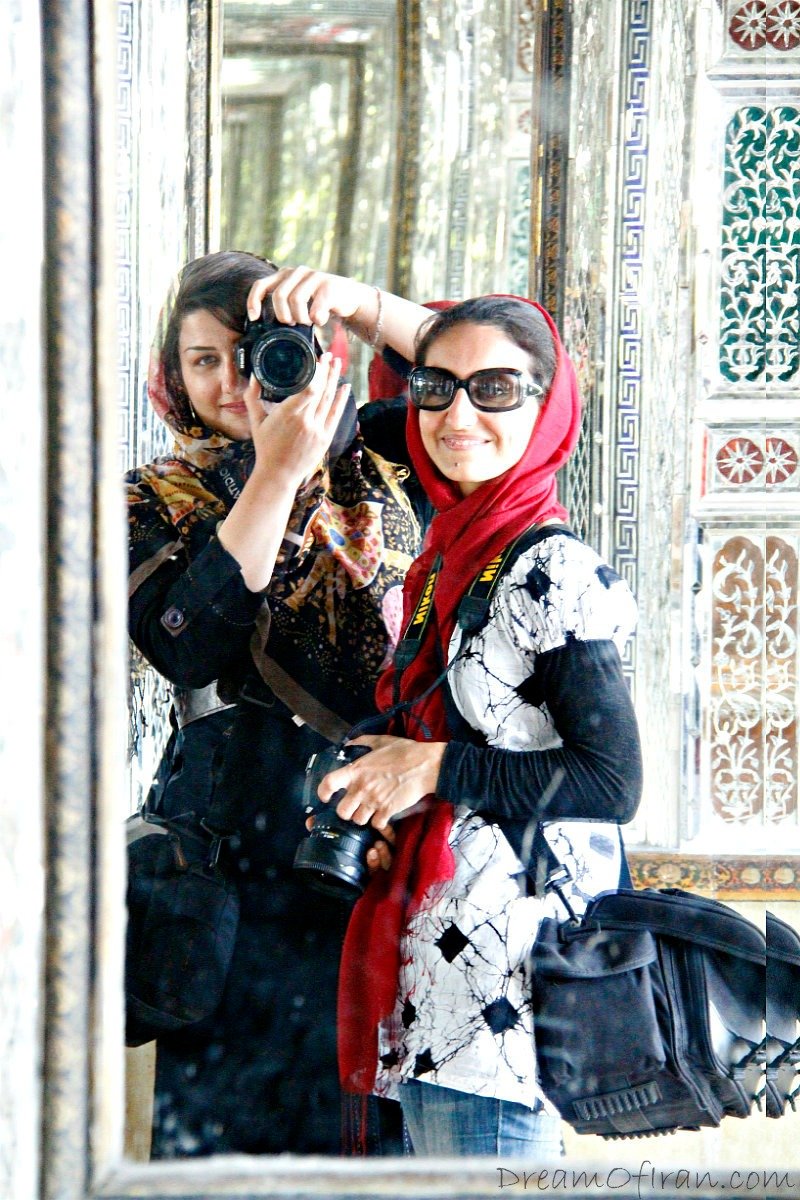 Solo female travel in Iran, is it a good idea? Is it safe for women to travel to Iran?

I decided to plan my Iran trip together with my friend Madi, an Iranian woman traveller. Her family had no problems in letting her travel around Iran with the only company of another woman. So we set off to discover the wonders of modern Persia and to bust the myth of Iran as a dangerous travel destination for women.

I’ve often come across misleading articles stating that in Iran women don’t go anywhere alone, and are never seen alone in public but only accompanied by their families or in groups. If you travel to Iran you will quickly realize that this is not the only inaccurate but downright false.

Not only are most women I know pretty independent, but solo female travel in Iran is a rather common reality.

During my two-week trip to Iran, in every city, I saw women alone, in groups of women only or with other men, either family or friends, students or professionals, relaxing in parks, shopping, going to work or school, and busy pretty much in all routine activities you can think of.

Travelling in Iran as a woman, my personal experience

In the span of two weeks, we have visited many Iranian cities, and most trips involved buses and trains, both day and night ones. I quickly noticed we were not the only women travelling alone. In fact, we met and chatted with many women travelling solo on night trains and buses because not only this is a very common practice in Iran, but it’s also very safe.

This trend of giving a bad image to Iran without any kind of knowledge is becoming truly boring and tiresome, as well as old and too much of a cliché.

My recent trip to Iran saw two travel writers/bloggers/photographers (my friend Madi and myself) exploring some of the main cities and attractions, such as Isfahan, Shiraz, Persepolis and Yazd.

We also travelled to more offbeat destinations, such as Lahijan and Talysh in northern Gilan province, as well as provinces like Khuzestan, Lorestan and Kermanshah.

My personal experience of female travel in Iran was richer than travelling solo. In fact, being with an Iranian woman, all our steps were filled with those insights only a local can give you.

Each of those extra pieces of information made me realize how close and similar Iranians are to Italians, both in the good aspects such as warmth and a genuine sense of hospitality and in the bad ones, such as confusion and delays. And also in the odd ones, like the overall carefree attitude and very personal interpretation of rules and laws. It was probably these constant and repeated comparisons that made of laughing and giggling the main features of our journey.

My southern Italian/Sardinian look made everybody mistake me for an Iranian, asking me for directions or just striking a conversation with me until they understood that, apart for some three words, I don’t speak Persian.

English is seldom spoken, this is why I would recommend booking a tour. All the places we’ve been to are rather laid-back, with Shiraz being probably the most relaxed. Maybe this is due to the fact that it’s considered the capital of poetry and romance rather than a business hub, so it needs to live up to the expectations.

How I prepared to travel to Iran – Practical tips

1. Learning about the dress code

The first thing you want to know as a woman travelling solo to Iran is what to wear. The Islamic dress code (hijab) is enforced, and tourists are not an exception. In Iran, it goes beyond the headscarf and involves tunics and manteau, so go prepared.

READ MORE: What to wear in Iran – a practical guide

2. Learning about Iranian culture and society

This should apply to any country you visit, especially for the first time. But in Iran is especially important as it’s likely to be different from most countries you visited. From a stiffer relation between men and women to places where men and women are separated, in Iran you need to know your place.

READ MORE: Things to know before travelling to Iran

3. Getting my visa in advance

I know getting a visa on arrival in Iran is pretty easy and doesn’t require much paper, but usually, my flights from Italy reached late at night and I didn’t really feel like spending more hours at the airport.

This is why I did it only once and I usually applied for my Iran visa beforehand from their consulate in Rome. Now you can easily do it online, and this is my recommendation as it’s fast and headache-free.

READ MORE: How to apply for Iran visa

To avoid surprises I couldn’t fix because I don’t speak Farsi, I prepared my Iran itinerary in advance before travelling. This included also hotels and flights. Now you can book hotels, domestic flights and local buses online using the website of the Iranian agency 1stQuest.

Tips for the solo female traveller in Iran

I have read several not-so-pleasant experiences from women travellers in Iran. Ranging from uncomfortable situations to downright sexual harassment, these things should never happen.

I admit that in all my Iran trips, I have never experienced any harassment, maybe because I can be easily mistaken for a local so men are warier? Whatever the reason, I feel compelled to give some tips to women travelling solo to Iran (that I usually follow wherever I go).

My first Iran trip as a solo female traveller

Overall, my experience of female travel in Iran felt like a roller coaster, involving hectic jumping on and off buses, trains, taxis, and even one IranAir flight. We visited as much as we could, barely stopping for lunch and dinner, tucking into sweets and nuts, drinking fruit juices, detoxing with local Khakeshir. We hardly slept an average of four hours per night for two weeks and laughed all the way from day one.

This trip was exhausting and soothing at the same time, but most of all, it was inspiring, giving a new spark to my own passion for history, culture, and, not least, travel blogging. The tour was definitely one of a kind, and I’ll do my best to reproduce the same atmosphere and make you sense the same vibe we felt all along the way.

READ MORE: How to plan a perfect trip to Iran