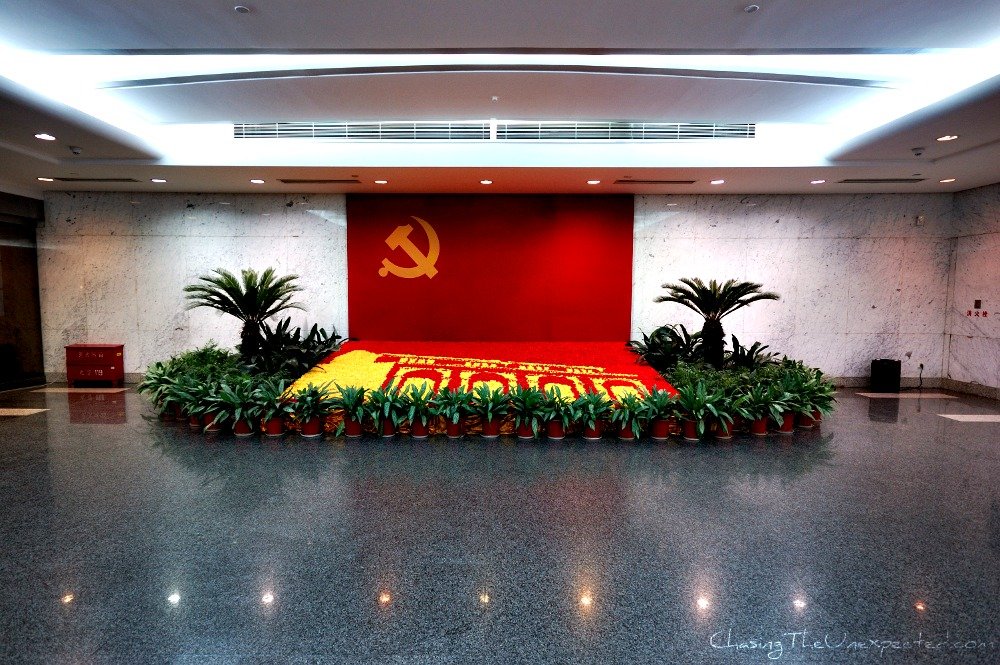 Just beside glitzy skyscrapers and the fast-paced modernity that is involving the whole China, Shanghai municipality didn’t neglect to celebrate their recent past, much more communist than their present. Among the most fascinating city highlights are definitely Shanghai Communist relics.

A hard-to-define system halfway with Capitalism that still clings onto some socialist principles, you can discover its Communist era is one of the cool things you can do in Shanghai.

In the year I spent in Shanghai, I explored the city as much as I could. Now I love going through all the pictures I took in every district I roamed. The only pictures I couldn’t enjoy are the ones I couldn’t take in the museums devoted to celebrating the most important moments of the start of the communist era.

Not because I didn’t have my camera, but because taking photos was prohibited. Not sure why since everybody can get in and most of the museums didn’t even have an entrance fee.

The communist period is inevitably controversial, having contributed to isolating China for decades but also to protecting its economy. In the wake of the Second World War, after the unspeakable massacre suffered in every country involved, the situation wasn’t easy anywhere, and in China Mao Zedong thought it sensible to close the country. For all the mistakes he made, it’s impossible not to admit that he managed to keep China independent from any other world power.

Chinese development is not a sudden “boom”, it was carefully molded step by step, with well-guessed choices from the national leadership, an unstoppable willingness to improve and the work of every single Chinese, a population that I found works more than every other population I’ve ever been in touch with.

The Communist era prior to 1989 is still to be fully understood. The ten years of the Cultural Revolution has its pros, such as women’s emancipation, and cons, such as the frustration of the education system. A very fascinating way to understand the city is to go around and explore Shanghai Communist relics that are open to the public.

I tried to step back in time to those years by visiting the strongholds that managed to survive the wind of change. Keeping in mind the propaganda elements that, no matter which country, historical places and leaders’ former residences inevitably reek of, I started my journey from the Site of the 1st National Congress of the CCP.

Interesting display of communist-era memorabilia, photos and the core moments of the Revolution explained, I particularly liked the room where they reproduced the first organizational meeting, moderated by Chairman Mao, with an evocative mix of imagination and nostalgia.

As Lonely Planet put it, “the dizzying Marxist spin of the museum commentary is a salutary reminder that Shanghai remains part of the world’s largest communist nation.”

After having seen the place where everything started on the 23rd of July 1921, I wanted to get up close and personal with the main characters that made Chinese modern history, other than Mao (I would have loved to but couldn’t manage to go to his birthplace at Shaoshan, in Henan province).

So the second pillar I visited on my tour around Shanghai Communist relics was Zhou Enlai’s residence, a western-style four-story house built in 1920 in the former French Concession. Zhou Enlai was the first Premier of the People’s Republic of China (1949), and here the Shanghai Office of the Delegation of the Communist Party of China was established in June 1946, during the negotiations between the Party and the Kuomintang, after the victory against the Japanese occupation.

The Shanghai Office was known as General Zhou Enlai’s residence, where he used to hold official meetings and press conferences. Despite its obvious western look, very likely due to the widespread style of the former concession, what strikes in the house is its spartan furniture and decoration.

Not far from Zhou Enlai’s residence is another notable dwelling and one of the best Shanghai Communist relics, Sun Yat-sen’s. Doctor, revolutionary and political leader, Sun Yat-sen is considered the “Father of the Nation” thanks to his active role in the overthrow of the rather spineless late Qing dynasty and his work on establishing the first steady pillars of the newly formed Republic, of which he was elected the first President.

Also called Sun Zhongshan, Sun Yat-sen boasts countless shows of remembrance all over China, Shanghai included, such as streets (Zhongshan Road) and parks (Zhongshan Park), named after him. Although his house was widely looted during the Japanese occupation, today it’s possible to see the original furniture (but photographing is not allowed).

Another prominent figure of the years of transition between imperial and republican China is Cai Yuanpei, one of the leading Chinese scholars and patriots, so I decided to end my tour at his house in Huashan Road, Lane 303, House 16.

He devoted his life to abolishing the feudalistic educational system and introducing a new way of learning. His residence-museum displays a wide collection of personal belongings and photos that chronicle his life and his travels to Europe, especially France and Germany, where he studied the Western system to draw inspiration on how to improve Chinese universities.

The building doesn’t have the typical entrance of a museum and is not on the main road, which can be tricky. Visitors need to go inside Lane 303 and at the detour turn right, and look for number 16.

Despite the endless criticism, China today is nowhere near what it was before 1989, and Chinese people are well aware of this. The repressive system many media talk about is hype, people in China don’t live in terror and with the country’s fast development, everybody’s lifestyle is improving, no matter which class they belong to.

China is far from being perfect (never been to such a country though), and there are rural areas still poor and behind schedule, but like many expats of the People’s Republic of China, I trust the government is working on it.

Chairman Mao is as beloved as criticized, but believe it or not, when talking about the communist era it’s impossible not to sense a touch of nostalgia.