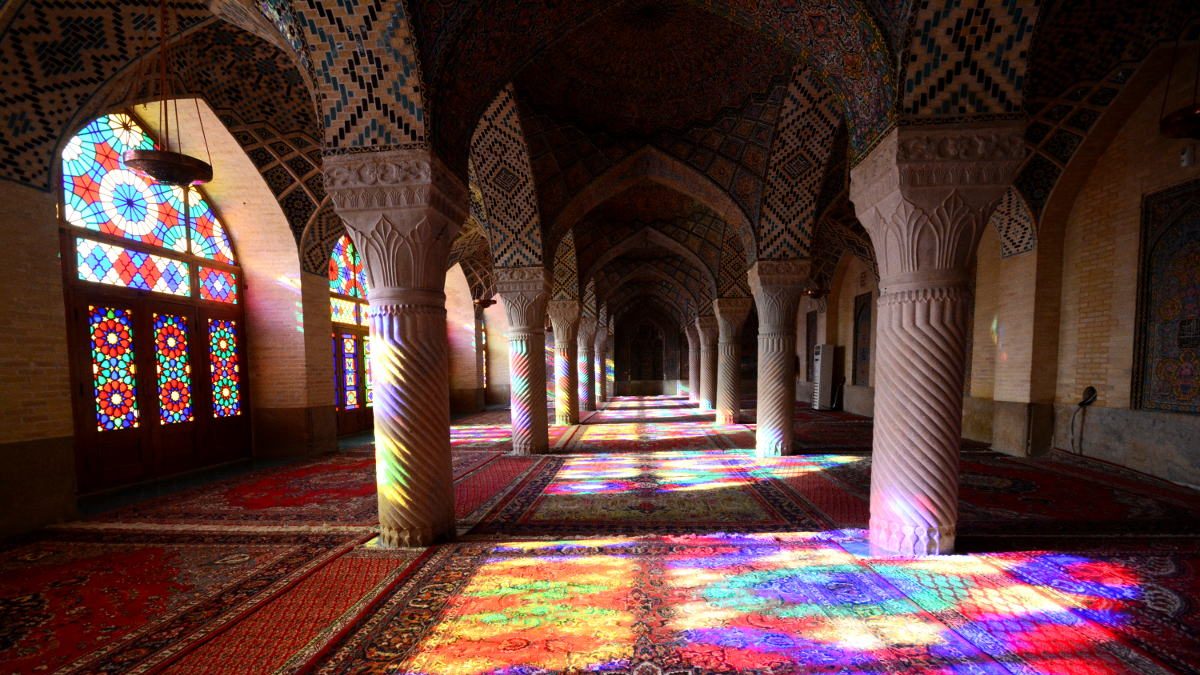 Iran romantic city par excellence, there are quite a few things to do in Shiraz that can easily fill two or three days of your whole Iran itinerary.

From royal palaces to stunning mosques to archaeological sites, the places to visit in Shiraz will make you fall in love with this magical Iranian city.

Top Things to Do in Shiraz

Called the city of poets and nightingales, even though not as big as Tehran, Shiraz guarantees a diverse range of fascinating experiences.

Iran’s most famous archaeological sites, Persepolis and Pasargadae are a must if it’s your first time in Iran. You can either take a day trip from Shiraz or visiting the sites on your way to Isfahan or Yazd.

Pasargadae was founded by Cyrus the Great (Kourosh-e Bozorg in Persian). Persepolis by his nephew, Darius the Great (Dariush-e Bozorg), who made it the ceremonial capital of the Achaemenid Empire.

The carvings of Persepolis are extremely interesting as they depict moments of the royal life such as the dignitaries and foreign leaders who came here to pay tribute to Darius. You will also see images of bulls and lions, symbols of the seasons in the ancient Zoroastrian religion.

Before leaving the sites, stop at the burial site of Naqsh-e Rostam. Dating back to some 2500 years ago, it’s located some 12 km from Persepolis and houses the tomb of Darius I, the Great.

This is absolutely what to do in Shiraz if you are a history and archaeology fan.

READ MORE: Check out my article on my visit to Persepolis, Pasargadae and Naqsh-e Rostam.

2. Nasir al-Mulk, one of the first things to do in Shiraz

Showing off a stunning light interplay early morning, Nasir al-Mulk mosque is hands-down one of Shiraz’s top attractions. Especially if it’s your first time in the city, make sure you don’t miss it.

READ MORE: Discover why Nasir al-Mulk mosque is one of Shiraz top attractions.

3. Karim Khan Citadel (Arg-e-Karimkhani), one of the top places to visit in Shiraz

Located in the city centre close to Shiraz bazaar, Karim Khan Arg is the central palace of the Zand dynasty and one of the top Shiraz tourist attractions. You can hardly miss it thanks to its large, solid tower.

Apart from being the residence of Karim Khan, founder of the Zand Dynasty and ruler of Persia from 1751 to 1779, it was also a stronghold. The citadel served, in fact, as the military heart of the ruling clan.

It’s a pretty impressive building covering an area of some 4000 square metres in a complex of about 12800 square metres. Beyond the imposing brick walls, you will visit a large garden and an internal courtyard framed by several rooms.

The interior is finely decorated with colourful tile works depicting scenes from Persian literature as well as natural patterns of flowers and birds. Inside, you can also visit the beautiful traditional marble baths (hammam).

I suggest visiting the citadel as it’s an important piece of Shiraz history and secular architecture.

4. Vakil Bazaar, one of the main Shiraz attractions

Vakil Bazaar is another complex dating back to the Zand dynasty, always devoted to developing the buildings and the architecture of Iran. A traditional Iranian bazaar, its decorated vaults, ceiling and walls make it one of the places to visit in Shiraz.

Officially some 200 years old, this traditional market is thought to have been built much earlier, around the 11th century, and renamed only more recently during the Zand rule.

Strolling around this beautiful local market you can see internal courtyards, old shops, caravanserais and obviously you can do a lot of shopping. They sell just about everything from Persian carpets to copper pans, from spices to traditional clothes and prices are pretty affordable.

Opening hours: Everyday except on Fridays.

READ MORE: Check out our article on the best traditional bazaars in Iran.

Close to the bazaar in the same district, one of the top Shiraz attractions is Vakil Mosque. Stretching some 11,000 square kilometres and with an interior of 48 pillars and a minbar (pulpit) with 14 marble stairs, this is a pretty big worship place.

If you are staying 2 or 3 days in Shiraz, you can maybe visit this mosque not on the same day than Nasir al-Molk, even though they are pretty different and both of them a must.

Right in front of the entrance of Vakil Mosque, you will find the Vakil traditional baths (hammam). Now open to the public, they are a wonderful place to see how life was organised and what were the different roles in the old society.

You will walk through the different halls of the baths and the old life will be represented through a series of statues engaging in different chores. Obviously, you will also see how the baths were organised and you can admire the beautiful interior decorations.

They are not too big and won’t take long to visit them. I totally recommend them as one of the top things to do in Shiraz as I truly enjoyed my time there and learnt a lot.

7. Tomb of Hafez (Aramgah-e Hafez), one of the main places to visit in Shiraz

One of the poetic claims of fame of the whole of Iran, it would be too much of a pity not visiting the Tomb of Hafez, or Hafezieh, how Iranians like to call it. Shirazis are super proud of their Hafez and so are all Iranians. In fact, his mausoleum is a constant stream of locals who just go to pay a visit, do a prayer and read his verses to seek inspiration for their present and future.

The mausoleum of the famous 14th-century poet was built under Karim Khan Zand in a luscious garden that was later expanded during the Pahlavi rule. Eight pillars support a copper roof and the ceiling is beautifully decorated with blue-hued mosaics.

Being the city of poetry, it’s only normal that in Shiraz you can find the mausoleum of yet another great Iranian and Shiraz-native poet, Saadi.

His tomb, Sadiyeh, too, is set in a lush garden and his remains lie under a turquoise dome surrounded by elegant Persian writing chronicling his life of revered wise man and traveller.

9. Eram Garden, one of the top Shiraz sights

Shiraz is also the city of gardens, jasmine and orange trees. Eram is the city’s most famous garden and a beautiful place to visit and linger for an hour or two.

Now the Botanic Garden of Shiraz University, Eram Garden houses several species of plants, trees, and flowers. Stroll around this green oasis and linger in its park and close to its beautiful fountains.

The water element, mandatory in Persian-style gardens is represented by a large pool standing right in front of a Qajar-era building. The concept of the Persian garden now is even UNESCO-listed for their important artistic value and having influenced the gardening style and design reproduced in India as well as Spain during the Muslim rule.

Eram Garden is definitely one of the things to see in Shiraz if you are staying at least for a couple of days.

Another Persian-style park I suggest to visit in Shiraz is Narenjestan Garden, with “narenjestan” meaning “orange trees garden” in Farsi.

This is also a beautiful garden, a stream of water running almost from the entrance to the Qajar-era house, now a museum open to the public. This is a lovely part of the garden and an unmissable one.

Inside you will see a wonderful mirror hall, a room literally covered with mirrors reflecting all over on each other and creating a mesmerising interplay of lights. There are different floors, each of them showing a different style of decorations and paintings.

The third most popular pilgrimage site in Iran after Imam Reza Shrine in Mashhad and Lady Fatima’s in Qom, Shah Cheragh is the funerary mausoleum of two brothers, Amir Ahmad and Mir Muhammad, who sought refuge in Shiraz during the Abbasid persecution of Shia Muslims.

The interior is stunning, the walls fully covered with glasses and mirrors as well as colourful tiles. When I visited, taking photos inside the shrine was forbidden. I think now it’s allowed only with the smartphone. Outside it’s allowed also with the camera. Women need to wear the chador provided at the entrance, which is separated from the men’s entrance.

If you are staying in Shiraz for 2 days probably you won’t manage to visit the Pars Museum, but if you can make it, this is a lovely attraction. It’s pretty small, so it won’t take you long.

Located in Nazar Garden, it showcases a beautiful collection of paintings, several handwritten Quran, as well as architectural features and decorations from the Zand era, when it was built. Here is also the tomb of Karim Khan.

READ MORE: Do you have at least a week? Check out our guide to the top places to visit in Iran in 10 days.

WANT TO READ IT LATER? SAVE IT IN YOUR PINTEREST BOARD!