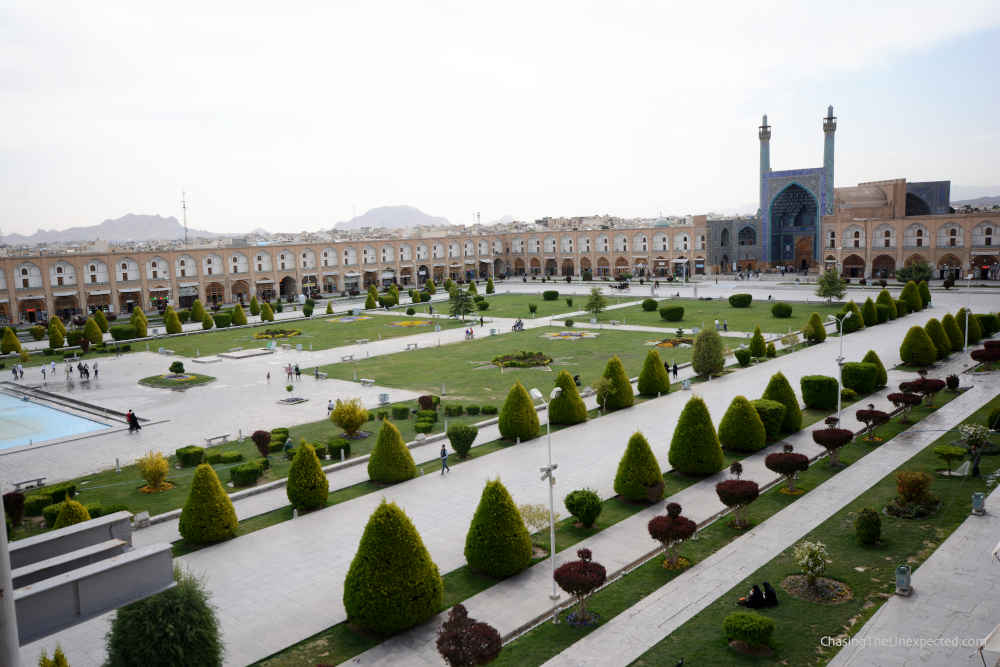 Always included in the main classic Iran itineraries unless you are exploring offbeat Iranian provinces, the charming city of Isfahan has been Iran’s capital during the long Safavid reign from 1598 when Shah Abbas moved the capital from Qazvin until 1736 when Mashhad became Persia’s main city. Isfahan’s wealth and beauty flourished between the 16th and 17th centuries, particularly under the rule of Shah Abbas I. It’s around these years that all the main landmarks we can visit today were built and made the city the most important of the Persian empire.

Praised and celebrated by travelers, artists and writers from different nations and periods, from Venetian Marco Polo to Roman book collector Pietro Della Valle to Edward Browne in his A Year Amongst the Persians (1893), Isfahan has bedazzled visitors for centuries and shows no sign of cooling.

From finely decorated mosques to cozy cafés to Armenian crafts and restaurants, there are so many things to see and do in Isfahan that I always recommend carving between two to three days to fully explore the city, especially if it’s your first time. If you want to enjoy and take your time to understand all the places and also take in the streets and appreciate local life, three to four days might be necessary. I have been to Isfahan many times and each visit entails some new discovery, be it even only a new restaurant or coffee shop serving scrumptious local cakes and herbal teas.

Make your way to Naqsh-e Jahan

Also known as Imam Square, Naqsh-e Jahan is the Persian for “image of the world”, apparently a moniker the place has been bragging about for centuries when bedazzled visitors called it this way for the first time around the 16th century. This is Isfahan’s pulsing heart. Go wild snapping all types of pictures of the beautiful dancing fountain and see the locals chattering their afternoon away, before getting on visiting all the landmarks that frame the square. Here, you can easily spend half a day. And after you are done with the rest of your Isfahan sightseeing, get back to Naqsh-e Jahan to see it all spruced up for the night giving you some pretty memorable mesmerizing views of the flickering lights and water-gushing fountain with striking landmarks in the background.

Start your tour of the square from its southern end and enter the large 17th-century Imam Mosque. Its blue dome stands out among the other buildings and its finely decorated interior features blue vaults rich in mosaics and flowers and symbols patterns, and obviously Arabic calligraphy. Along with the square, this mosque is a UNESCO world heritage site. Strongly wanted by Shah Abbas the Great who contributed to making Isfahan one of the most glorious cities of the Muslim world.

Possibly even more beautiful than Imam Mosque is Sheikh Lotfollah Mosque, located on the eastern side of the square and quickly recognizable because it’s the one and only one without minarets. Mainly used as a private mosque of the royal court and later as an Islamic school, after swaying in its corridors, don’t miss the peacock-shaped light on the ceiling of its main room that makes it look even more golden.

The royal palace where Shah Abbas hosted the official visits of foreign leaders, Ali Qapu Palace is located right in front of Sheikh Lotfollah mosque. Large and tall, it shows natural patterns decorations and on the upper floor, a beautiful music-themed ceilingstenciled with instrument-shaped carvings. From its terrace, you get a great view of the whole square and the two mosques.

All around Imam Square is the century-old bazaar that was already there when the city was an important hub along the Silk Road when traders and merchants. Take a walk and see all its shops, from the carpets to the artisan jewelry to Persian-style decorative tiles. This bazaar, however, is a little expensive, and even after half an hour of bargaining, you will still buy over-priced compared to other areas of the city. Enjoy strolling the alleys and the shops of this historic bazaar stopping to buy or even only to see how artisans carve out their creations in the local workshops or sip Iranian black tea with the carpet sellers.

Literally “Forty Pillars”, Chehel Sotoun is a pavilion standing at the end of a large pool. Yet another building commissioned by Abbas the Great, this is where the aesthetic-obsessed Persian Shah used for entertainment and where his successors, starting from Shah Abbas II, used to welcome foreign officials. The name of this appealing pavilion comes from the twenty pillars supporting the entrance that, when reflecting on the pool’s water, appear to be forty. Take a walk inside the pavilion and admire the delicate decorations typical of Persian buildings and enjoy the flickering reflections in the water of the facing pool.

Persian for “Eight Heavens”, this is a scenic pavilion built by Shah Suleiman I, also from the Safavid dynasty, in Charbagh Street mainly for private purposes. One of the must-see attractions in Isfahan, the outdoor is a beautiful garden and the interior is a set of rooms and halls decorated with an interplay of mural paintings, mirrors, tiles, plasterwork and carved wood. Built on two floors and 20 rooms devoted to the resting and entertainment of the royal family, the pavilion includes also three pools and decorated porches on the four sides of the palace. Visit the golden room on the second floor for some beautiful tile work and ornamental images of Persian myths and legends, and appreciate the mesmerizing ceilings topping all the rooms, a key feature of Iranian historical buildings.

The main worship place of the Christian Armenian community that moved to Isfahan under Shah Abbas, the interior of the Vank Cathedral is not huge but richly decorated with colorful wall paintings representing scenes from the Old and New Testaments while still including symbols and patterns of the Persian ornamental styles. Don’t limit your visit to the church but take a walk around the courtyard where is the cathedral’s graveyard. Just outside is also a small museum about the history of the local community as well as important facts about Armenia, including the Armenian genocide.

After visiting the main landmark, I highly recommend a walk around the Armenian quarter to sample their typical freshly baked bread and pastries (you will spot them easily as the fragrance will attract you pretty quickly), to see the local artisans and workshops, and to enjoy your meal at one of their trendy restaurants and cafes. Even though the best time to plan a trip to Iran is in Spring, between April and June, if you happen in Isfahan around Christmas, join the local Armenian community in their celebrations that, according to the Orthodox calendar, is on January 6th.

A trip to Isfahan is not complete without an evening spent chilling out and walk through the striking Si-o-Seh Pol, Persian for “33-pillar bridge”. The nearly 300-meter long, vaulted building was erected between 1599 and 1602 under the rule of Shah Abbas and is a favorite hangout among locals who love to enjoy their tea enjoying the reflection on the Zayanderud River (Persian for “life-giving river”).

Where to stay in Isfahan

In Isfahan, I stayed at a quite budget 3-star Hotel Part in Jahanara Alley, Chaharbagh Street, ten minutes walk from Naqsh-e Jahan (Imam Square), for 1.600.000 IRR (less than 40€) per night per double room. Some other hotel options you can check out if you are willing to spend more are Ghasr Monshi Boutique Hotel in Ghasr Monshi Alley No.10, Neshat Street. Set in a historical palace dating to the Qajar dynasty, the hotel features also an in-house restaurant and a local spa-hammam.

Where to eat in Isfahan

Some of the best places I ate in Isfahan are Shahrzad Restaurant in Chaharbagh Abbasi,Abbas Abad Street, a little touristy yet tasty and not too expensive, and definitely two of my favorite eateries in New Jolfa Armenian district, the trendy and cozy Hermes Restaurant & Cafe serving international dishes, and the lovely Firouz Cafe, not far from Hermes, for a fantastic cup of herbal tea and delicious cakes and sweets.