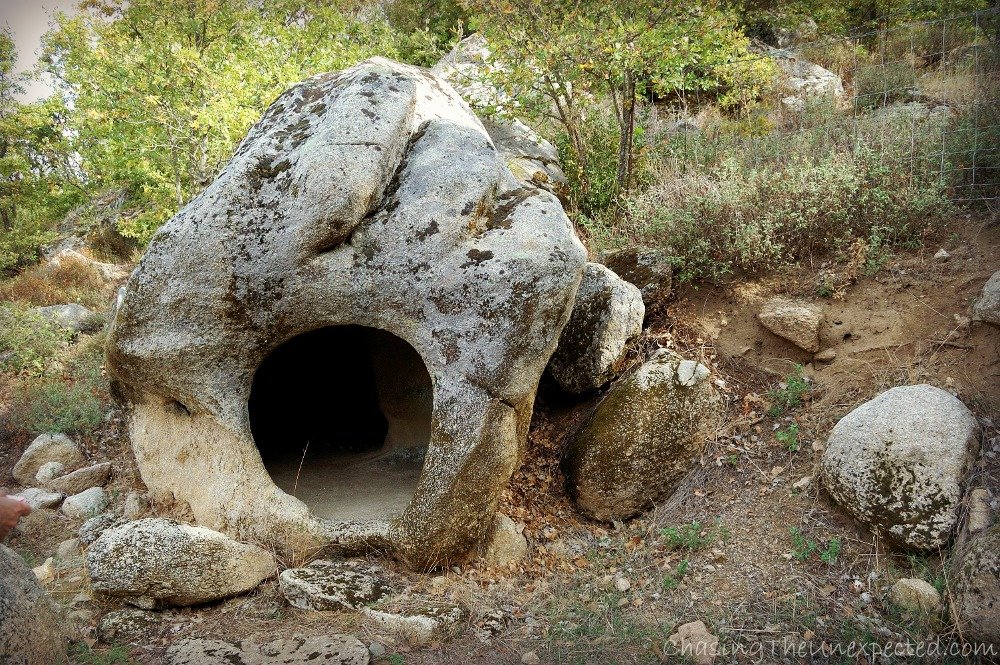 Would you ever think there was a place inhabited by fairies and giants? I mean for real, not in children stories?

If you’ve been following my blog for a while, and have read a post or two about Sardinia, you might have already noticed that the island has its more than fair share of oddities.

Anywhere you go in Sardinia, you’ll never experience a lack of ancient remains, but probably the best-preserved treasures belong to prehistoric times when the island was home to the still mysterious Nuragic civilization. One of the first things visitors will notice while travelling throughout Sardinia history is the presence of thousands of stone towers. These are called “nuraghi”, they date back from 3,000 to 3,500 years, and they are not the only evidence of a stone-centred culture and society.

A visit to Mamoiada, one of the prettiest towns in Sardinia, sure will stay impressed in your memory for a variety of aspects. Whether you are a history lover, a food-obsessed or festivals’ fan, here you can find anything you are looking for.

I come to Mamoiada now and then, every time to witness the performance of the Mamuthones, propitiatory ritual to welcome the new season and please the gods to inspire them to send a good harvest. This little town lies just beside obstreperous Orgosolo, more famous than the neighbours thanks to its murals and its bandits. However, as history goes, Mamoiada bred its fair share of family feuds too, brought to a definitive end only in the 1990s.

Despite all this, the whole area is regarded as one of the most hospitable of the whole island. Guests are as sacred as they were in the past, welcomed to private houses and protected by tradition.

Last time I went to Mamoiada, I completed my archaeological tour with an exceptional guide, a local, one of the most authoritative experts of the area’s prehistoric remains, contributor to many books and essays on the subject. With all this in mind, I went to the first sight of our itinerary with Salvatore Ladu, his son Pino and my parents.

As soon as we arrived at the perfectly preserved fairies’ house (domus de janas), I was enchanted. A big rock inside which our ancestors carved out a grotto with the purpose of creating a funerary mausoleum. Sardinia is dotted with stone structures, from the nuraghes, to these domus de janas, thousands scattered all around, and giants’ tombs, also funerary buildings. However, the ones in Mamoiada are famous for being particularly well preserved, probably because people and administrations devoted time and energies to this, otherwise, they would have fallen in the scrap heap of history and served as shepherds’ storage, a destiny that awaited many other fairies’ houses.

Dating back 5000 to 4000 years BC,  more than fifty fairies’ houses were counted only in Mamoiada’s territory. They are tombs, the last home ancient people destined to their deads’ bodies once the souls embarked on their afterlife journey. Way less luxurious than Egyptian pyramids, but the idea is pretty much the same. One of the main differences, I think, is that our domus de janas were built similar to people’s actual houses so that when they died they were still familiar with the surroundings. They were going to spend their eternity in there, it’d better be comfortable.

I entered one of them, probably the widest one, but seeing a small size, I truly hope the houses where they actually lived in were much bigger unless our ancestors belonged to a super tiny race.

A little further, we visited the giants’ tombs which, as the name might already suggest, were also funerary monuments. These were probably built for the wealthy, and although we know they were used as tombs, they are still very much shrouded in mystery. Why? Well, to begin with, they usually sit on or are surrounded by magnetic fields. Many people in Sardinia will tell you they like to lie there for ten minutes, better if during sunset, to feel regenerated and stave off their daily stress. Part of the research (the most mystery-loving part) is also wondering about whether these “giants” actually existed or are just symbols, especially after finding perfect prehistoric statues of giant men.

Now academics seem to agree with the fact that our native population was one of sailors, farmers and shepherds, hence, their strongest cult was toward the Mother Goddess, to which many small statues found in funerary complexes were devoted.

Apart from small sculptures, Mamoiada is also the place where bigger stones clearly with worshipping function were found. Some were actually recovered in private gardens, such as the famous Perda Pintà, a beautiful stone found only recently and decorated with circular concentric carvings, symbols most researchers link to the cult of the Mother Goddess, harbinger of fertility and abundance. The house where Perda Pintà (painted stone) was spotted is also a lovely B&B, homonymously named Sa Perda Pintà, where I’ve stayed one night.

Bigger than these votive stones are the menhir, huge rocks, some of which reaching 6/6.5 meters and of phallic shape, probably to symbolize male fertility. This has always been a crucial element of past Sardinia: all menhir, in fact, were devoted to Dionysus and at the centre of propitiatory rituals. Still today, near Mamoiada’s sanctuary of Cosimo and Damiano, two saints worshipped by Catholics, stands a menhir, which makes researchers think that the place was already a sacred area before Christianity, and Catholics only changed the name and adapted the site to their ceremony. The phallic simulacrum is thought to be mandatory during Dionysus processions, and the priestess carried one up all the way to the sanctuary.

I admit, after this tour, especially if the sun is preparing to set, Mamoiada can assume a spectral air, and thinking about the region’s turbulent past doesn’t really help make it look more innocent. The town doesn’t have a train station, seldom buses connect the town with Nuoro, the province’s main city, and to wander around these prehistoric remains you inevitably need your own car, but if myths, stories, legends, popular traditions and past mysteries fascinate you as much as they fascinate me, I guarantee you won’t regret the trip.

I went to Mamoiada twice, and the second time I stayed at a different B&B that I would equally recommend as it was wonderfully furnished and decorated, very comfortable and with a delicious breakfast with homemade cakes and pastries, S’Ortensia B&B.