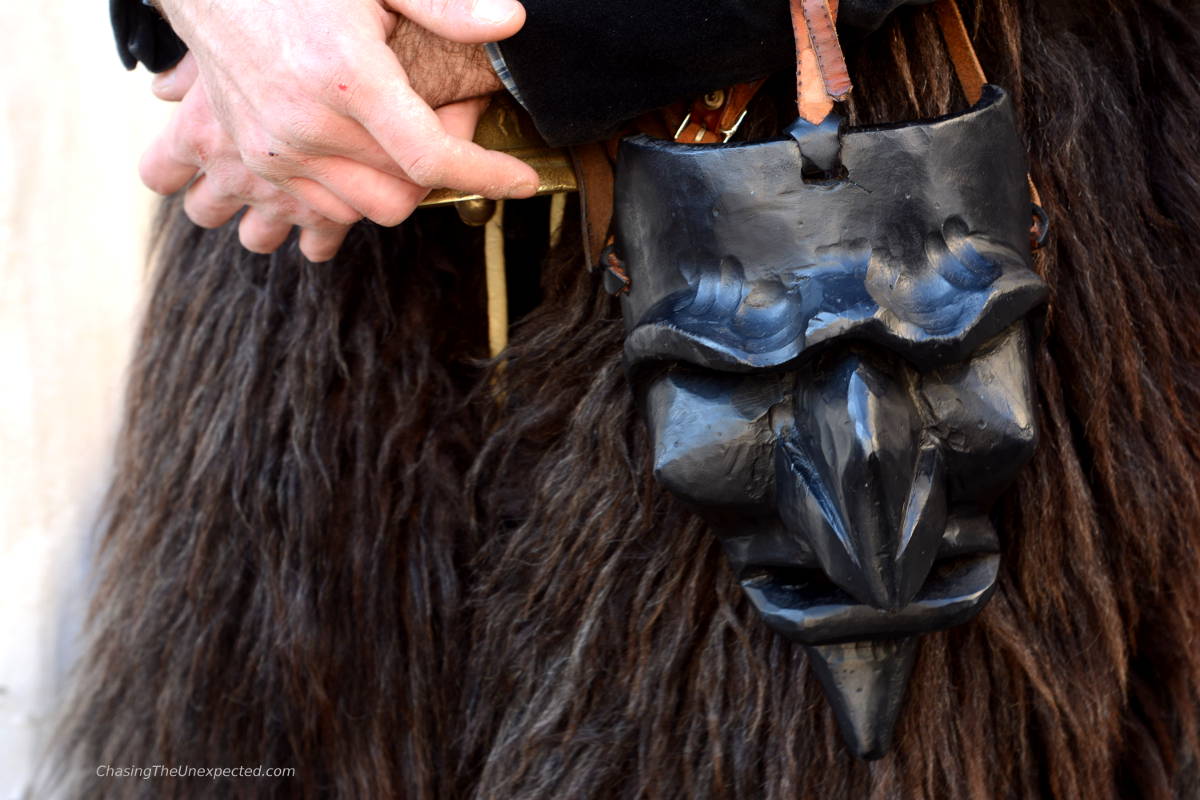 Since I first attended the Mamothones ritual for Carnival in Mamoiada in 2009, I can’t recall how many times I went back to see it. There is something primordial in this Sardinia festival, which made it immediately hit my list of top Carnivals in Italy.

Each region, city and town in Italy celebrates its own Carnival, and all celebrations differ for history and culture. Venice Carnival gave the chance to the lower classes to blend with the noble families for one day thanks to the mask everyone wore. In Oristano, Sardinia, they celebrate the Sartiglia with fascinating rituals and equestrian tournaments and vaulting.

In many other places, Carnival is a legacy from pagan times when people celebrated the end of winter and the new harvest. This is what’s behind the Mamuthones festival in Mamoiada.

Being a local myself, I’ve always known that attending the Mamuthones festival at least once in your life is one of the top things to do in Sardinia. But it’s only after you have seen it by yourself, experienced the vibe that it conveys, that you fully understand why.

So in this village in Sardinia’s Barbagia region, close to Orgosolo and Nuoro, the Carnival is a 2000-year-old ritual that gives visitors from all over Sardinia and other European countries a precious experience.

The stars of this Sardinian Carnival are the Mamuthones. Their origins are not fully clear, which adds to the mystery of their image. Even though they “come out” a few times a year, the townspeople “feel” their presence all year long. And this is why, year after year, century after century, the town of Mamoiada carries on with this tradition, attracting visitors every Carnival.

Academics and historians study and debate over the origins of Mamoiada’s festival, but natives don’t seem to bother participating much in the argument. The Mamuthones have always been a presence in their town and they have no reason to think they will still be in the future.

Who are the Mamuthones?

Pre-Christian masquerades that have been performing this ritual for the past 2,000 years, the Mamuthones show up on the streets of the village for the first time of the year the night between the 16th and the 17th of January in the occasion of Sant’Antonio Abate (Saint Anthony Abate). After roughly a month, in February, they appear on Carnival Sunday and on Shrove Tuesday.

With much research going on, it seems everyone reached more or less the same conclusion and placed the rhythmical dance of the Mamuthones among the propitiatory rituals to bid farewell to the cold winter season and welcome the warm and bright spring and summer. The new season brings also the new harvest and being Mamoiada a mountainous area, the life of the natives was and to some extent are, strongly dependent on the harsh local geography and weather.

The dance of the Mamuthones for Saint Anthony and Carnival

The festival in honour of Saint Anthony is celebrated in many towns in Sardinia, and everywhere bonfires are lit up in all the neighbourhoods, with the biggest being in the main square. In Mamoiada, the Mamuthones dance around the main bonfires all night long.

In the two parades they do for Carnival, there is no bonfire, so the ritual is slightly different. The type of steps and dance is exactly the same, but for Carnival, they just parade in two rows along the streets of the village and somehow they mix with the other masks celebrating the festival. In my opinion, for Saint Anthony, it’s more intimate and the bonfires give a magical atmosphere.

Their dance consists of rhythmic jumps cadenced by the sound of some 30 kg of bells that they carry on their shoulders. Their dress is made of black moleskin trousers typical of Sardinian clothes for men, a white blouse and black sheepskin on top. The bells are placed in descending order with the biggest on top

After wearing all the parts of the costume, only the mask is left. It needs to be dark-brown wood, strictly handmade and as ugly as possible to convey a dramatic look.

It’s easy to understand why they attract thousands of visitors every year. It’s a journey back in time many people can relate to. It’s a throwback of human instincts when religion was more connected to nature and people’s needs.

The Mamuthones are usually twelve, to symbolize the number of the months, and parade dancing rhythmically in two parallel lines, gliding in through the tangle of narrow streets of the city centre, reproducing the propitiatory ritual aimed at interceding with natural forces.

Parading along the main figure of the Mamuthones are the Issohadores. Their name was given after the “soha,” the lasso they use to joke around during the parade and seize the local women.

The Issohadores, dressed in red and white, are usually eight or ten. Their duty is to guard the Mamuthones, and one of them leads the whole parade along the streets of the town providing the instructions the Mamuthones need to follow to be perfectly synced when performing their dance.

The ritual of getting dressed

Their costume, a mix of animal skin and manmade tools, are evocative of the primordial tie between men and animals/nature. In prehistoric times, especially in rural areas, livestock was pivotal for the surviving of the community as they served as food as well as for working. This is why in many of the festivals reminiscence of pagan times, animals are widely represented.

When they start their ritual dance, the heavy steps of each of them are perfectly synced together. The sheep bone-made clapper hitting the bronze of the bells makes the sound needed to stave evil off.

The process of wearing the costume takes hours and is closed to the public. We were lucky enough to have been able to see it and take pictures. It really was part of the ritual itself. There are two cultural associations in Mamoiada that run the show, and we’ve been invited n the backyard of the old house where the “Associazione Atzeni-Beccoi,” one of the two. All the parts of the clothes are laid on the ground and each “Mamuthone” gets dressed with the help of outsiders.

After getting dressed, they perform the ritual once inside the backyard without wearing the mask, and when the leader Issohadore deems they are ready, they wear the black mask and go out to meet the crowds.

At the end of the parade that lasts pretty much all afternoon until the evening, the Mamuthones go back to their original venue to rest, eat but first of all, take off the 30-something kg of bells carried around all day.

Tips to enjoy your trip to see the Mamuthones

Mamoiada is a small town with a very limited choice of B&Bs, so booking in advance is highly recommended. I stayed in several B&Bs in Mamoiada and my favourites were Ortensia and Perda Pintà.

If you can’t find a place in any accommodation in Mamoiada, you can try the neighbouring towns like Orgosolo or Nuoro.

If you made your trip to Mamoiada, you should definitely visit the surroundings.

Don’t miss towns such as Orgosolo, Dorgali and Nuoro and the nearby natural attractions such as Su Gorroppu, the Ispinigoli Grottoes and the Cedrino river.

Not far, it’s also very interesting to visit the archaeological sites around Mamoiada. You will find ancient necropoleis like the domus de janas (Sardinian for fairies’ houses) and tombe dei giganti (tombs of the giants).

If you have more time, you can plan a longer trip to Sardinia and explore the different regions and traditions of the island.

Whether you are attending the Mamuthones festival of Saint Anthony in January or Carnival in February, in Mamoiada winter is very cold. Keep in mind that it’s a mountainous area, temperatures can get close to zero especially at night, and it might snow.

My suggestion is to pack winter clothes, comfortable shoes, a warm coat or jacket, and possibly a hat and scarf. The party and celebrations might continue until late at night, so warm clothes are a must.

READ MORE: What to pack for Italy – Italy packing list for every season

Blend in with locals

Hospitality is important all over Sardinia, but in this area, it’s sacred. If a Mamoiada resident invites you, don’t hesitate and accept. The local foods are all made using homegrown, genuine ingredients, the Cannonau red wine is one of the best on the island, and the festival is an occasion to share homemade local meals all together in the main piazza. Their hospitality will truly make you feel at home.

How to reach Mamoiada

Extra-urban public transport in Sardinia is not well-organized, so my suggestion is to rent a car. Your best bet is to use Google Maps. Even though the road is good, consider that Mamoiada is in a mountainous area.

If you are coming from Cagliari, take the highway S.S. 131 towards Sassari up to Abbasanta and follow the signs towards Nuoro. When you are getting close to Nuoro, you will find the sign towards Mamoiada-Lanusei.

If you reached the island by ferry and are travelling from Porto Torres or Sassari, take the highway S.S. 131 towards Cagliari up to Abbasanta and then follow the same directions mentioned above (Nuoro first then Mamoiada-Lanusei)

If you are coming from Olbia or Nuoro, take the S.S.131 towards Cagliari and turn to the interchange Mamoiada-Lanusei.