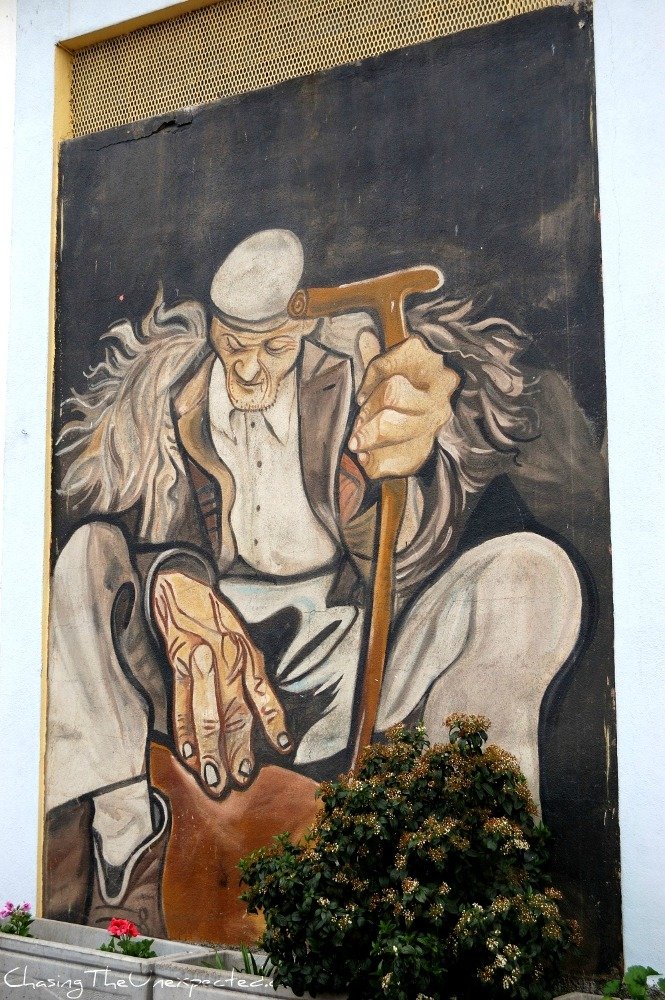 Orgosolo is a small, apparently sleepy, town of central-eastern Sardinia located in the Barbagia region of the Nuoro province. It’s very well-known both on the island and in the rest of the country for its stormy past. This was, in fact, the place where misunderstandings would be solved with blood feuds involving entire families for generations.

Truth or legend, there is a whole oral tradition of tales around Orgosolo’s past, although this history of violence, lawlessness, and complicity is widely shared among other villages in the same territory of Nuoro’s province, such as Mamoiada and Lula. The latter, also in the Barbagia area, is the hometown of Matteo Boe, a former bandit who kidnapped seven-year-old Farouk Kassam, son of businessman Fateh Kassam, and for which crime he’s still serving twenty years of prison.

Apart from stories of bandits, murders, and kidnappings, Orgosolo is famous also for its murals, street art graffiti that make it one of the prettiest villages in Sardinia. Here, local artists paint the walls of the town with stories of its past and with tales reproducing the main events of Italy’s history and world affairs. For this, I think it’s one of the places worth visiting in Sardinia.

What to do in Orgosolo, Sardinia

The Murals of Orgosolo

All across Orgosolo, hundreds of murals give a colorful account to the culture and the political ideas of the town and the area, always very sharp and quick-witted. This type of local street art, very strong and opinionated, was founded somewhere around the beginning of the 20th century by artists close to anarchic ideas and started to give a voice to the citizens who usually didn’t have one. These murals are an insightful and detailed chronicle of the local life as well as strong opinions on political events, starting from the national ones but quickly reaching international affairs.

When Fascism and WWII became a reality in Italy, new murals close to the Resistance started appearing and this idea spread also in the neighboring towns. Today, you can see beautiful murals in many towns and villages in the Barbagia region as well as in many other towns all over Sardinia, even though Orgosolo remains a milestone and its internationally-famed walls make it an open-air museum.

All graffiti has a strong political background and is very controversial in the measure that they outspokenly attack historical figures studied and considered as “heroes” by mainstream media and school textbooks.

In a land that was invaded by literally everybody, from Italians to Spanish, to Arabs, it’s normal that its natives are born with the protest in their blood, and Orgosolo, semi-hidden in the harshest mountains of the island, is living proof. Nearby, you can also visit Pratobello, the ghost town where the Army wanted to build a base in the 1960s but finally couldn’t because every single Orgosolo resident, from children to elderly, lay down on the tarmac and prevented anyone from entering.

More Reasons to Visit Orgosolo and Things to Do

Are the local murals the only reason to include Orgosolo in your bucket list when you are planning your trip to Sardinia? Definitely not. Orgosolo itself has a few other things to see and experience, and if you rented a car upon landing in Sardinia (which I totally recommend), you can also visit the surroundings and neighboring towns and attractions.

Here are some other attractions and things to do in and around Orgosolo besides photographing the local street art.

Apart from the street art, Orgosolo is the only town in Sardinia where silk is produced from scratch and is the only material used for the lionzu, the headscarf of the traditional costume that women today wear mainly at their wedding. The lionzu is very costly and often women pass down generation after generation. This is why this art is sadly fading away and the only woman still making and weaving the local silk is struggling to keep it alive.

Close to Orgosolo, nestled between the mountains of Barbagia is the famous Gorroppu canyon, one of Sardinia’s favorite hikes. If you are a sport type of traveler, by all means, descend the Gorroppu gorge for some great hiking and breathtaking views. You can do this independently or book a tour. Either way, this is going to be a fantastic experience.

All around the territory of Orgosolo and Mamoiada, the local countryside is literally studded with prehistoric relics and archaeological sites. Dolmen, fairies’ houses (domus de janas), menhir, giants’ tombs, and the most ancient remains from thousands of years ago.

Celebrate an ancient Carnival in Mamoiada

The rough masks of the Mamuthones appear on the streets of Mamoiada, a town close to Orgosolo, for the first time of the year on the night between the 16th and 17th of January, on the occasion of the Sant’Antonio Abbate festival. It’s now that the Mamuthones dance around the bonfires lit up in the town’s squares. I would say that this is a more intimate event, while for Carnival, the Mamuthones mingle with the other more modern masquerades, even though remaining the stars of the show.

Dorgali is an extremely scenic town not far from Orgosolo. Surrounded by mountains, Dorgali is for the fit because walking inside the town is a succession of uphill, downhill, and narrow alleys. Some of the best things you can do here are to try the flavorful traditional food and look for the historical sites, including some vestiges from the Knights Templar presence in Sardinia. If you are in the area in summer, make sure you stay here for a couple of days as it boasts some of the best beaches in Sardinia, such as Cala Gonone.