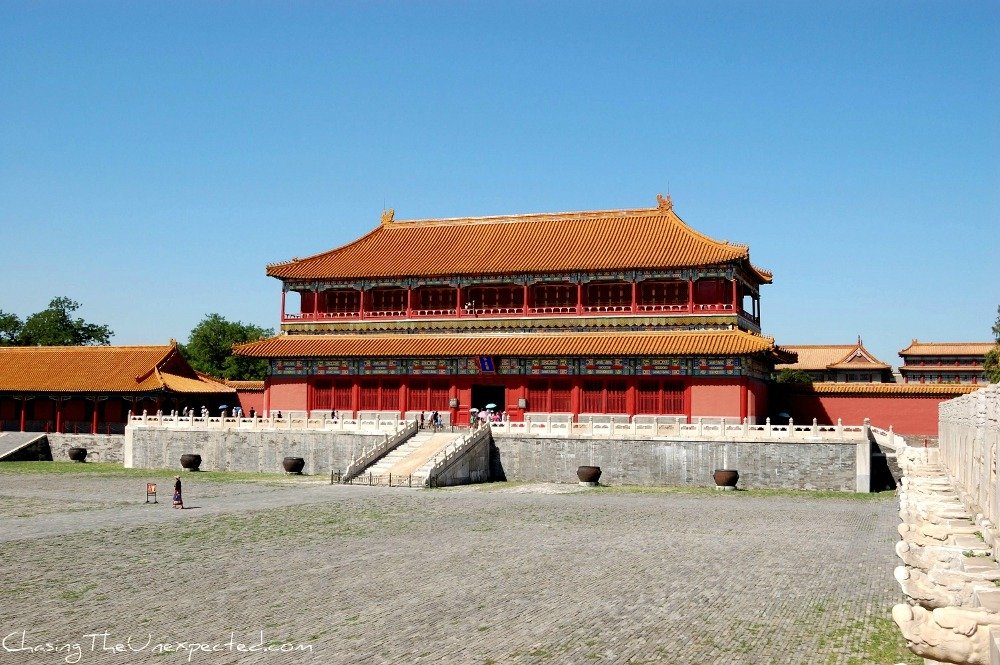 As I walked across the Forbidden City’s entrance gate in Beijing I was overwhelmed with expectations. I had read a lot about it and seen many pictures, and yet I was lured in by curiosity. Definitely one of the first things I wanted to visit in China. I decided to visit Beijing’s Forbidden City on a tour but you can totally visit independently without a guide.

Visiting the Forbidden City in Beijing

The first thing I noticed was that although it’s a royal palace, it has nothing to do with the royal residences I had visited in Europe, where luxury is really the main parameter used to measure their power and influence.

The Forbidden City, in Chinese Gùgong (故宫), literally “Former Palace”, is China‘s biggest imperial residence. Declared World Heritage Site in 1987 and listed by UNESCO as the largest collection of ancient wooden structures in the world, the City was built between 1406 and 1420 and has hosted the emperors of the Ming and Qing dynasties. The complex consists of 980 buildings laid out on a surface of 720,000 square meters.

This walled city is considered one of the best examples of Chinese traditional architecture, as it faithfully reproduces the mystical concepts of Feng Shui, Taoism, and Confucianism. Ancient Chinese culture believed in a strong harmony between men, nature, and the universe, and the Forbidden City was built following the descriptions of heavenly palaces in traditional fairy tales, with areas devoted to enjoying natural phenomena, such as listening to the rain or the wind, traits common to many gardens and pavilions throughout China.

Despite such celestial-like construction, life within its walls has always been shrouded in mystery, especially when it comes to the emperor’s private life, populated by countless concubines, young, beautiful, and well-educated girls coming from all parts of China, whose sole duty was to please the monarch. The name of “Forbidden City” derives from the fact that nobody was allowed in or out unless specifically stated by the emperor.

Within the walls of the Forbidden City Beijing, the emperor used to hold official meetings, receive foreign chiefs of states, read, write and host ceremonies. In a complex of buildings almost entirely inhabited by women struggling for power and competing for the emperor’s favors, very likely stories of jealousy, plots and vendettas thrived. There are rumors that even some nasty affairs such as murder happened behind those walls, and it seems that this was the reason why Mao Zedong refused to live there and decided to close it once the Qing dynasty came to an end.

Imperial city residence for almost five centuries and to 24 emperors, the Forbidden City was the house of some 9000 people, between servants, guards, eunuchs, concubines, and the royal family. All buildings are made of painted wood and all materials were brought from all parts of China. To avert the risk of fire, huge cauldrons full of water were scattered all throughout the complex.

Although some features changed depending on the dynasty, both Ming and Qing emperors were allowed to have more than one wife and several concubines. Every night the emperor would choose which concubine was supposed to entertain him and the girl would go through hours of what can be considered the forerunner of modern beauty salons, in order to be at her best not to disappoint His Majesty. The number of times a concubine was called by the emperor would determine her social rank.

The last Emperor who lived in the Forbidden City was PuYi, and was put on the throne to rule the country at the age of three, nonetheless. According to the legend, at the ceremony to crown him as emperor, the child was too scared to stay calm. He was forced to abdicate in 1912 when turbulent times were starting for China but was held in the palace until 1924. Puppet of the Japanese government, PuYi has always been strongly criticized for his weak policies towards Western powers, allowing them to reduce China to a semi-colony. Shanghai itself was divided into foreign concessions.

Dawdling about the Forbidden City, even though it’s not as it was during its golden ages, is inevitably captivating.

At every step, I couldn’t help but think of the thousands of concubines that within those 10-meter high walls found a career boost and their golden prison at the same time.

Of course, their mentality and priorities were different from mine or from Chinese girls today, but these are the only parameters of comparison I have and the only tools I can use to try to understand how they must have felt. It’s hard to believe they were actually happy to devote their lives to please the emperor, having to compete with other hundreds of girls. They were not allowed to marry unless chosen by the emperor himself as one of his wives, and I fail to believe that, although living the dream of many to be the emperor’s concubine, they didn’t dream of having their own family.

Today it’s not possible to visit every room of the Forbidden City, but walking around its wide corridors, through its countless red gates, visiting the most important halls and gardens, gives an idea of how life was within those walls, charming, luxurious, and cruel.

Explore Beijing with a tour guide

As I mentioned earlier, I booked a tour for almost all my sightseeing in Beijing because I had very few days and I wanted to save time but still visit as much as possible. There are different options, you can either buy online only a single ticket to the Forbidden City, a guided tour to a single landmark, or a full-day tour to enter a few attractions with a local expert. There are several tours you can choose from, such as this one that takes you to all of Beijing’s iconic landmarks including the Summer Palace and the Temple of Heaven.

If you are more into a fully guided trip to China, I would consider a well-established and reliable tour company of the likes of G Adventures that operates a few China tours such as an exciting National Geographic Journey 12-day in China tour and visit also Shanghai and Xi’an.

33 thoughts on “Inside the Forbidden City Between Myth and Reality”