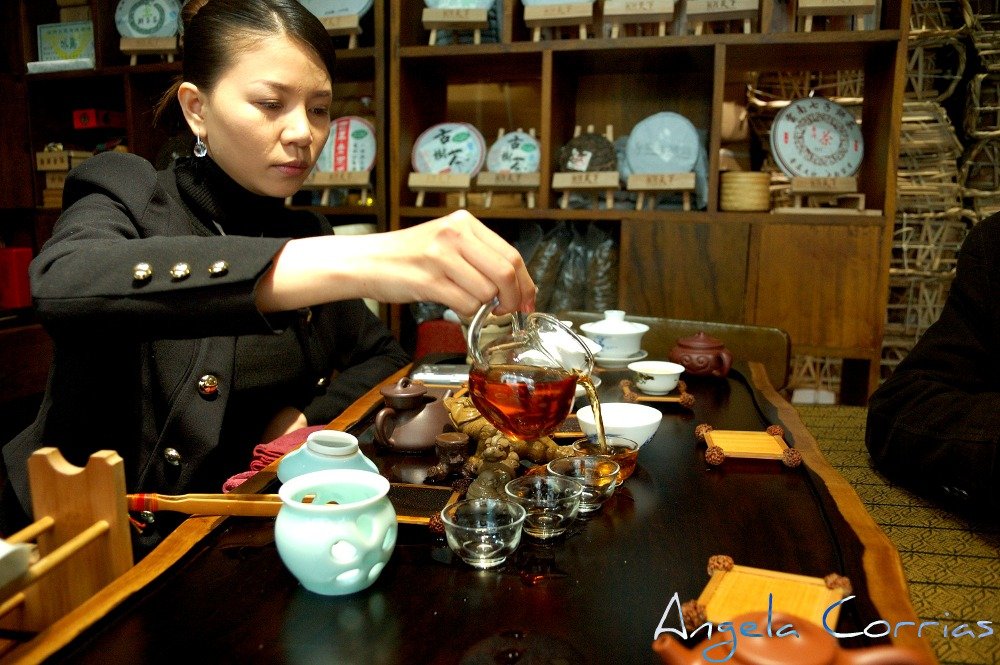 In my perpetual quest for authentic traditions in China, I ended up delving into a local tea market. And drinking tea became one of my favourite activities in Shanghai.

When I thought I was simply going to buy tea, my friend let me know immediately it was not going to be a simple pick-and-pay experience: “Tasting tea is an art, not simply drinking.”

Discover the tea art in China

I wanted to discover China’s most intimate traditions, and Tea Art is one of the oldest ones. Ancestral, fascinating, magical.

To the extent that buying it at a normal supermarket means almost betraying the roots and missing something essential of Chinese culture.

In China, tea (Cha: 茶) is not just a beverage, it’s part of people’s life. The Chinese were the first to discover the leaf, and they have been drinking it for thousands of years.

“There are many legends and folklores about the tea”. And this is only the beginning of the journey into this intriguing tradition that has been an important element in the Chinese society for thousands of years, throughout royal dinasties, revolutions and wars.”

China has been often criticized for having completely lost its traditions and connection with its past. Although I find this statement very simplistic to define a so complex culture such as the Chinese, I agree that much of their identity has been sacrificed for the sake of modernity.

However, one of the aspects of the ancient society that Chinese people are not ready to give up is indeed the Tea Art.

The most widespread legend about tea sees Shennong, who is believed to have written the earliest book on Chinese pharmacology, as the main character. According to the tale, he tasted all kinds of plants and water with the aim to make people aware of what was edible and what wasn’t.

Finally, one day he was poisoned by 72 different plants and found relief only tasting the leaves of tea trees. Although that book wasn’t written by Shennong, who is a legendary figure himself, it’s an important account of the beginning of the tea tradition.

Tea in the Chinese tradition

According to the Chinese tradition, tea plays an important role in the Cosmo.

This is how Yu Lu in his The Classic of Tea puts it:

Tea grows on land, that is “earth”; it is brewed in a stove, that is “metal”; it is heated by the burning “fire”, which is fuelled by charcoal, which is “wood”; the final tea drink is “water”.

The process through which tea changes from being a plant to being a drink is a process of going through the natural process of five elements combined (metal, wood, water, fire and earth) in order to reach a state of harmony.

This gives an idea of how important it is, considered not merely a drink, but a plant with medicinal properties that plays a central role in the society itself, as the symbol of wellbeing and as a way to strengthen the sense of belonging to a community. During business meetings, meals or while welcoming guests, any occasion sees the ritual of the tea happen.

Like every tradition, also the tea culture has its own personalities. Apart from the legendary Shennong, there are two men worth a mention: farmer Wu Lizhen, who lived during the Western Han dynasty in Sichuan province where there still are seven cha trees he planted himself. This makes Wu Lizhen the first official cha farmer.

The other prominent figure of tea practice, who is actually revered as the True Sage of the Tea, who wrote The Classic of Tea, is Lu Yu, who lived during the Tang dynasty. Personality full of contradictions, Lu Yu was believed to have special cha-making skills, since the Buddhist monk Zhiji, after tasting his tea refused to drink any other tea.

Requested by the emperor, the monk tried the beverage prepared by other people and declared them inferior. Moved by curiosity, the emperor found Lu Yu and asked him to make tea for the monk, without letting the monk know. Finally, Zhiji declared that that one tasted like Lu Yu’s tea, and the emperor was convinced of the higher quality of his tea-making skills.

His book, considered the masterpiece of the tea art, is a comprehensive guide on all things about this Asian drink, from its history to the harvesting, processing, quality control, brewing, producing regions.

Tea ritual in Shanghai and China

At the tea market, all little shops look like cosy sitting rooms in which customers are invited to sit and taste the different kinds of teas and infusions before deciding which one to buy.

Only staring at the ritual is already fascinating. First, there’s the washing of the tiny cups with hot water, then, the first time hot water is poured on the dry leaves inside the teapot and thrown away after one minute of infusion; the second time they pour water, they leave it for another minute and finally the set is ready for serving.

The tasting is also part of the ritual, during which the seller will explain the characteristics of the tea you are sipping. The first advice they give is not to swallow immediately so that you are able to fully understand the flavour, the quality and the seller’s explanation: the origins, the type of land where the herb was harvested, the kind of processing that brought it to be a drink.

According to tradition, the spirit of the tea is aimed at giving peace to the soul.

“Heping (peace) is the spiritual core of Chinese tea. Pinghe (tranquillity) is the outward shape of the peaceful spirit shown by tea drinkers. Heping and pinghe, peace and tranquillity, are interdependent like teeth and lips. Here, peace is a spirit, and also a shape; tranquillity is a shape, and also a spirit.”

The swift moves of the tea experts make the whole experience of purchasing tea so rich that next time I want to buy it, it will feel a shame to simply pick one from the Carrefour shelves.

15 thoughts on “Learning the Fascinating Art of Drinking Tea in Shanghai, China”