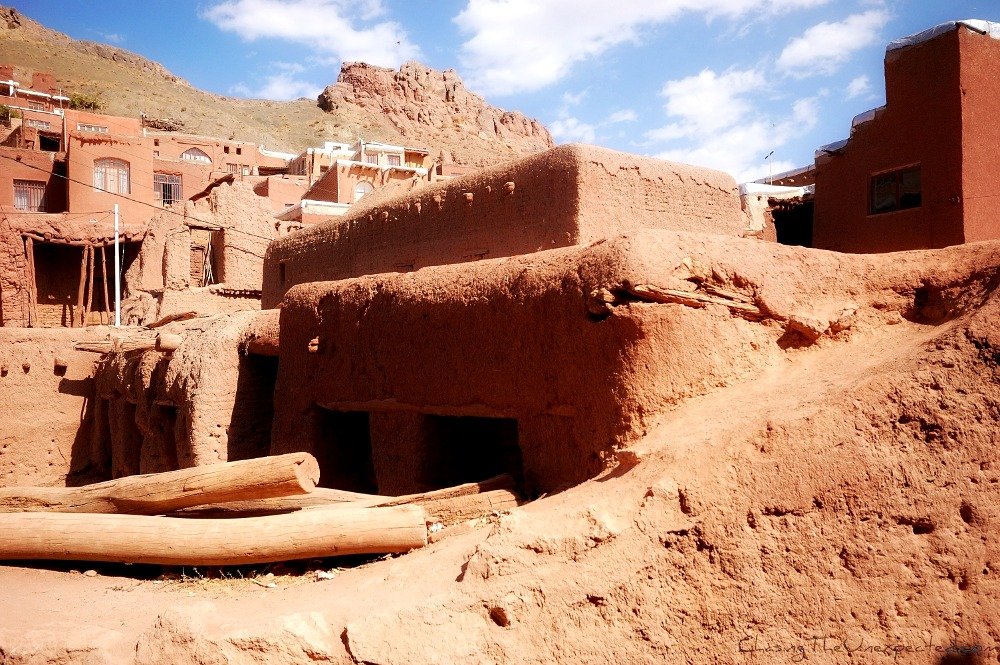 In my perpetual quest for the unexpected, this time I ended up in beautifully surreal Abyaneh, in central Iran, about 300km away from Tehran, in the district of Natanz of the Isfahan province. Anyone who enjoys traveling off the beaten path will find visiting Abyaneh ancient village a fascinating, one-of-a-kind experience.

For sure of Iran’s highlights, the interesting red village of Abyaneh became a popular destination shortly after the country opened to mass tourism. When I visited, a few years before, its streets were empty and I only saw a few local women wearing the traditional flower-patterned headscarf and a pistachio cream seller with his truck filled with goodness. The flocking of tourists from the world over inevitably changed the landscape, but I’m confident that Abyaneh resisted this last wave of change and managed to retain its original charm.

We arrived in Abyaneh late afternoon after visiting the traditional Abbasian House in Kashan and after driving all along the fascinating mountain range that seemed to be Iran’s natural spine. Once at the destination, we went straight to our hotel, decorated in an exquisitely traditional style, and after quickly collecting ourselves we met up again in the dining hall. Here, we were given the possibility to choose between normal tables and large, yet cozy, sofas on which locals both dine and relax after the meal.

For dinner we had “Dizi”, a traditional Iranian sheep-based dish served in a bowl in which every guest was meant to smash their own piece of sheep fat and add the crashed bread and the sauce enriched by smashed veggies and the meat in pieces.

The view from our room was a proper treat: a chain of unspoiled red mountains from the Karkass range that dominated the ancient village, entirely made with ochre-red clay. From our hotel, we could only see a tiny glimpse of the hamlet, and the daylight fading away was making it all the more shrouded in mystery, increasing the already very enticing effect it was having on me.

The further I step back in time when visiting new places, the more my passion for history gets a new sparkle, and in Abyaneh we did step back some 2,000 years.

Location and Architecture of Abyaneh

Set at the foot of the Karkass mountains, Abyaneh is the best place to experience the Persian Empire. From its architectural style, entirely in red clay, to the proudly preserved oldest traditions, the village is what best blends a close contact with nature and erstwhile Iran. Abyaneh is the kind of place where the boundaries between time and space are blurry, in case you were wondering if such places really existed.

The best way to appreciate the authenticity of Abyaneh is really to get lost around its alleys and take in the traditional architecture that covers several periods of the Persian empire from the Sassanid to the Seljuk, the Safavid, and also the modern-era Qajar.

The town’s layout is irregular and labyrinthine, the buildings of undefined frames, the color strictly red. Natives are very jealous of their traditions and are not willing to sacrifice them in the name of any modern blasphemy, be it tourism or globalization. Women proudly boast their colorful, flowery hijab, typical of their costume, almost as an outlandish reaction to the traditional simplicity of the surroundings.

Apart from the old houses, Abyaneh offers to tourists also a fascinating Zoroastrian fire temple dating back to the Sasanian period, castles, a pilgrimage site, and eight mosques, three of which (Hajatgah, Porzaleh and Jam’e) are certainly worth a stop.

The tangle of narrow alleys makes it very easy to get lost, and I would certainly have (and probably liked to) if I weren’t with locals. The ancient red houses strung out along the ragged main and side streets give the impression you are motioning towards a different era when cars didn’t exist, when men had a little more respect for the planet than they have now, and when the local community was vital for everyone’s life. It felt like I was motioning to some otherworldly experience.

“You are always the last one”, my guide never missed to point out to me. True, I was, maybe in some kind of unconscious attempts to make the visit last longer and further delay our trip back to reality.

53 thoughts on “How to Visit Abyaneh, Iran, to Step Back in Ancient Persia”