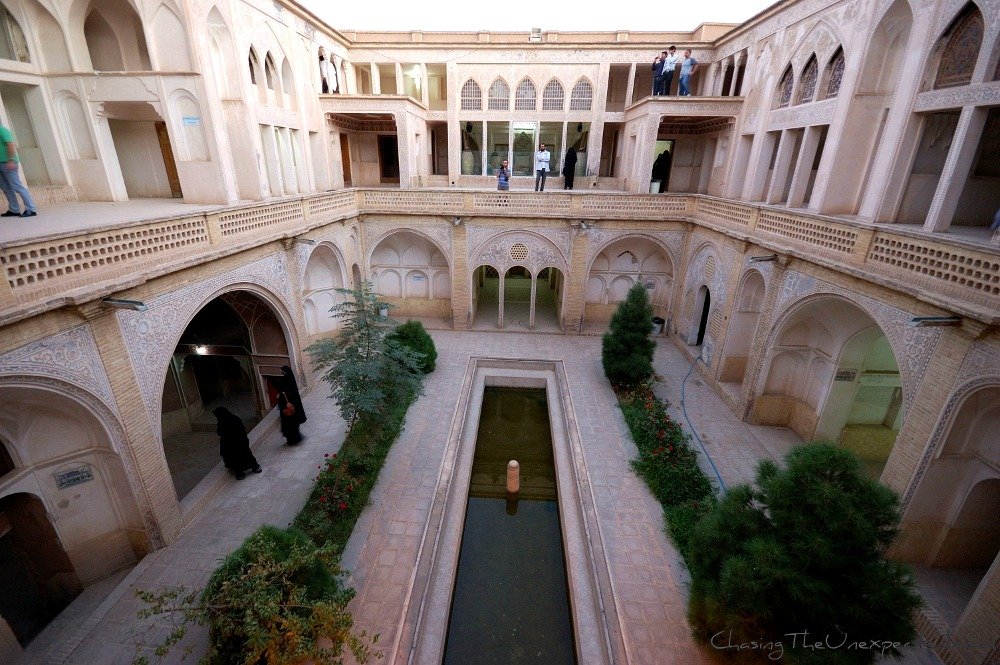 At about 228km away from Tehran, it is a must as it gives the great opportunity to take a peek at Iran’s private side by visiting the local Abbasian House in Kashan. Before getting to beautiful Abyaneh, the NGO that invited me to Iran planned a stop in Kashan, an ancient oasis city dating back to the 4th century BC that offers to visitors the priceless view of typical desert architecture.

Kashan’s architectural style perfectly adapts to its surroundings: the mountain range creates a red boundary on one side, while the desert on the other side gives the environment its typical warm colors, widely used for decorating the city. With this in mind, we dared invade the privacy of the Abbasian tribe by visiting their huge residence.

The Abbasian House in Kashan, also spelled Abbassian or Abasi, belonged to the wealthy family of a glass merchant, Haj Mohammad Ibrahim, and was built in the 18th century around a courtyard following all the standards of traditional residences of the area like the similar Borujerdi House and the Tabātabāei House. The windows, doors, and arches of Kashan’s Abbasian House look at the inside instead of the outside.

The residence was built keeping the four seasons in mind, so the underground floors had the purpose to soothe the summer’s extreme desert heat, while the winter was spent on the south of the house, to allow its dwellers to enjoy the daylight as much as possible.

Architecture of the Abbasian House in Kashan

The different levels, several yards, two main entrances and a succession of passageways and rooms devoted to the residents, the guests and the servants shape a world where privacy and intimacy were valued dearly but without sacrificing the sacred hospitality and social mores.

The construction of the Abbasian House in Kashan is not ancient, less than 200 years old, and the first thing visitors will notice is its majesty. The huge first well-preserved courtyard was devoted to welcoming guests. The big pool in the middle and the finely decorated garden made it for a delightful view.

Elegant domes, barrel vaults, terraces and courtyards give the visitors a fascinating experience and whirls them to a traditional Iranian family life, secluded and private.

The structure of the Abasian House in Kashan consists of several floors, courtyards, and buildings. The whole complex is finely decorated Persian-style with stained glass, mirrors and plaster reliefs. Between mirror-covered rooms and hidden passageways, Kashan’s Abrasion House is a fascinating interplay of Persian art and traditions.

Now inside the Abbasian House they are running a traditional Iranian restaurant and a tea house where you can sit and relax among locals.