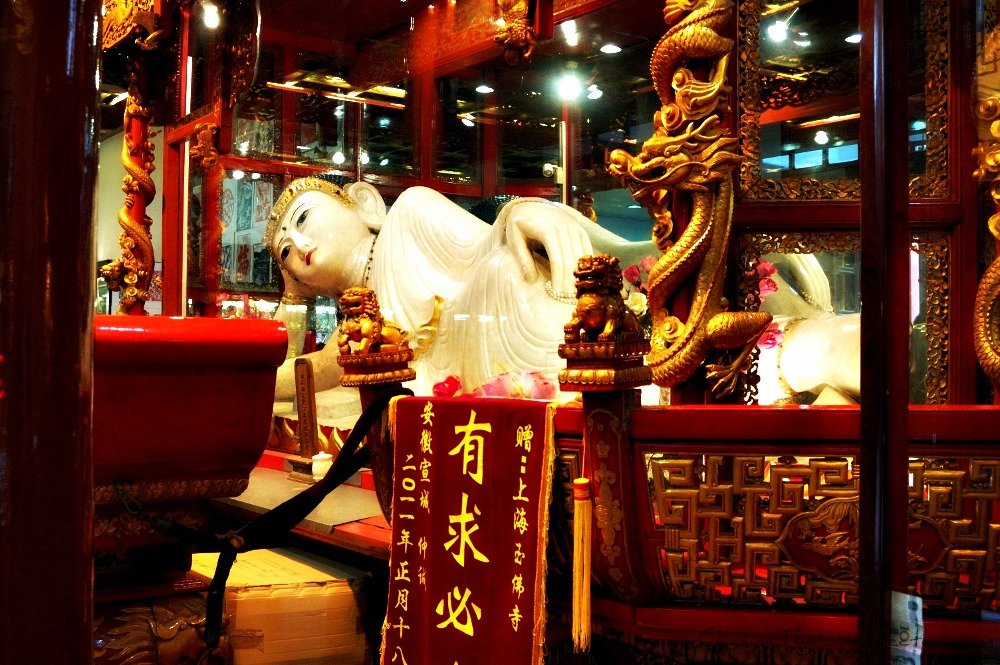 Jade is Chinese national pride, and it seems like Shanghai’s Jade Buddha Temple (Yu Fo Si, 玉佛寺) was built to celebrate the precious stone. Rich in precious stones, it’s one of the top things to do in Shanghai.

For as precious as it can be, in China, Jade is not just a stone. In fact, it’s also considered to bring good luck and even to have a positive influence on the heart, and this is why many women wear a jade bracelet so that they receive the stone’s benefits through their wrists.

At Shanghai Jade Buddha Temple, for sure, there was no lack of jade.

Two huge white jade Buddhas were brought from Burma by a monk of Putuo Shan. One is sitting, not allowed to photograph, two meters big, 205 kg, and embellished with agates and emeralds. The other one is reclining, about one meter long, representing his peaceful entry in the nirvana. The precious statues attract every day many tourists and probably as many faithful.

In the temple, there is also another reclining Buddha. Much bigger than the original one, it’s four meters long, lies on the right side with the right hand supporting the head and the left hand placed on the leg, in a typical position that inspires tranquility. It was brought from Singapore by the tenth abbot of the temple in 1989.

Even though the temple is not too old, it was built in a pretty traditional architectural style. There are several halls to be visited and whether you are a Buddhist follower or not, it’s a great experience and absolutely one of the favorite Shanghai attractions together with the fascinating Confucian Temple and Shanghai Museum.

There are also many ancient paintings and Buddhist scriptures distributed in the different halls of the temple, all contributing to making the sanctuary of western Shanghai even more precious.

Founded in 1882, the temple was destroyed during the revolution that overthrew the Qing dynasty and rebuilt where it is now in 1928. Apart from the two jade statues, the temple has many other statues on display, certainly less valuable, but all of them adding color and atmosphere.

The temple is very big, and I loved dawdling about its circle doors stumbling on orange-clad monks here and there. Like all temples in Shanghai, the contrast between the old-looking classical style is in striking contrast with the state-of-the-art urban architecture of the city. In many halls, there are shops selling relics and incense for the worshipers to burn. The ever-present crowd of tourists doesn’t refrain the many faithful from going to worship their gods.

Address:The temple is in 170 Anyuan Road (Anyuan Lu, 安远路), at the junction with Jiangning Road (Jiangning Lu, 江宁路), Putuo District.
How to reach: The easiest way to get there is by metro, line 7, Changshou Road station(Changshou Lu Zhan, 长寿路站). Take exit 5 and head east along Xinhui Road (Xin Hui Lu, 新会路). Turn right on Jiangning Road and walk to the temple at the crossroad. You can also take metro line 13, Jiangning Road Station, exit 4, then some 5 minutes walk. Alternatively, you can also arrive by bus, 19, 206, and 738 and get off in Jiangning Road at the crossroad with Anyuan Road. The only problem with buses in Shanghai is that most of the time they only show the streets in Chinese characters, both on the bus and at the stops, so you would need to be either confident with the city or able to read Mandarin.
Visiting hours: Every day 8 am-4.30 pm.
Entry fee: 30 Yuan (20 for Chinese tourists).