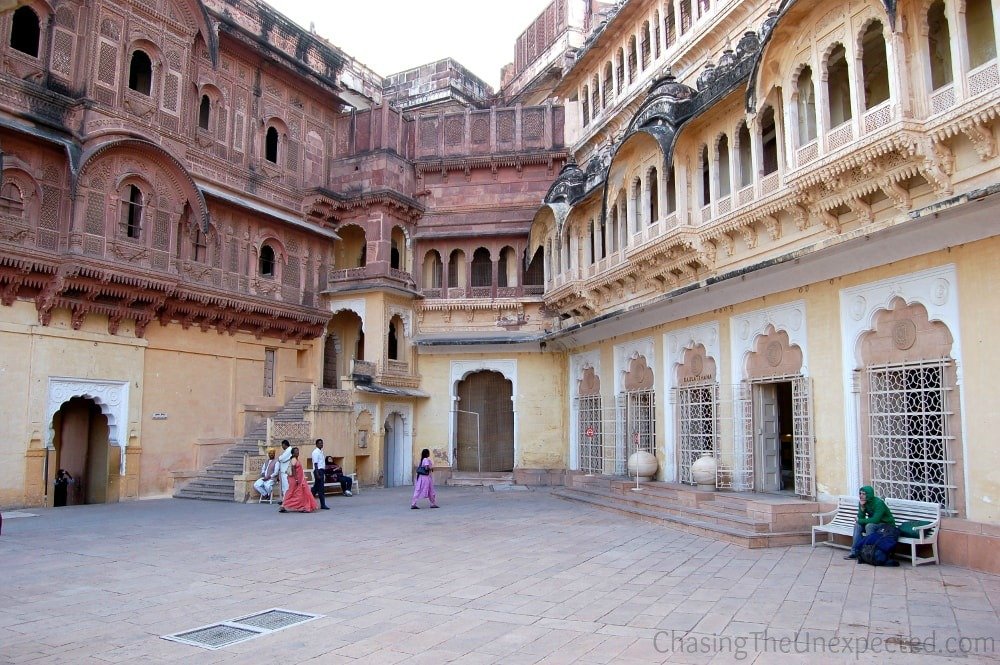 One of the most popular and visited cities in the Indian state of the Rajasthan, there are many places to visit in Jodhpur.

Famous for its azure hues, the plethora of palaces, historical buildings, natural sites, and activities make Jodhpur, the second-largest city in the Rajasthan after Jaipur, a true tourist hub in India. Founded in 1459 by the ruler of Mandore in the Rajasthan state, Rao Jodha, the city bears the moniker of Sun City. This is pretty simple to understand: it is sun-soaked for the most part of the year, delighting its citizens with perpetual summer.

Overview of the top things to do in Jodhpur, India

Why is Jodhpur called the Blue City?

Before getting into the nitty-gritty of our guide, a curiosity. Jodhpur, the Sun City, boasts also another nickname, the Blue City. Why is it?

The explanation of why Jodhpur the Blue City is actually azure-hued is pretty simple. In the past, painting a house with blue was a sign of belonging to a specific social class, and in this case, the class was the Brahmin caste (priests caste).

With time this social practice has been gradually abandoned, and today not only the people belonging to the Brahmin caste paint their house blue but also other families. This is what gives the city its blue tone even when looked at from afar.

READ MORE: How to avoid getting sick in India

The caste system in India is a very old system that rules the social stratification within Indian society. Throughout history, it has been adopted in different ways by each ruling power, and also now it rules marriages, job posts, education and all types of family affairs. Even though still greatly present in the Indian society, many are the people, also prominent figures such as the jurist and politician B.R. Ambedkar, who fought against the injustices of the current caste system and for the rights of the class of the “untouchables”, or “Dalits”.

Some 500 years old, Jodhpur is famous for its production of textiles and for the many tourist attractions in the shape of palaces, mausoleums and natural sites, but the peaceful vibe its blue colour gives is certainly one of the reasons that have been making it so popular with tourists in the past years.

READ MORE: Top things to do in Jaisalmer, India

Best places to visit in Jodhpur the Blue City

Among the places to visit in Jodhpur, one that cannot possibly be missed is the Mehrangarh Fort, located on a small hill above the city. A humbling collection of museums, galleries, a temple and even a park, the fort also shows beautiful paintings and old weapons of the different period of the local dynasties and rulers.

Built in the 15th century by ruler and founder of the city of Jodhpur, Rao Jodha, Mehrangarh Fort sits at about 125 meters above the city and is surrounded by thick walls. The imposing Fort comprises several palaces embellished by sophisticated carvings and beautiful internal courtyards.

Among the attractions of Jodhpur Fort are the National Geological Monument, Malani Igneous Suite Contact on which the fort itself was built, the Nagnecha Mataji Temple, devoted to Rao Jodha’s favourite goddess, and the 72-hectare Rao Jodha Desert Rock Park that reproduces the desert environment and vegetation.

One of the largest private residences in Rajasthan, Umaid Bhawan Palace is another place you can’t miss if you visit Jodhpur. Magnificent luxurious palace of some 350 rooms, part of it has become a hotel managed by the Taj Hotels chain, part is still inhabited by the former local royal family descending from Maharaja Umaid Singh, and part has been adapted into a museum. Definitely one of the places to see in Jodhpur.

One of the places to visit in Jodhpur, Jaswant Thada is a funerary memorial built by Maharaja Sardar Singh in 1899 in memory of his father Maharaja Jaswant Singh II. Made with finely carved marble layers, Jaswant Thada looks imposing and is now the cenotaph for other three rulers. Here you can visit also a small lake and a beautiful garden.

Tall and imposing, Ghanta Ghar is the clock tower of the Rajasthan and lies in Jodhpur city center. The tower overlooks Jodhpur’s daily life and the busy Sadar market, named after Maharaja Sardar Singh who ordered the building of Ghanta Ghar. This colorful bazaar is one of the main Jodhpur tourist places.

A photographer’s delight thanks to its soothing azure hues, from Jodhpur you can also visit its traditional surroundings such as Salawas village where you can get the vibe of the local life and also enjoy some wildlife like deer, peacocks, and antelopes.

The city of Jodhpur lies on the border with the Thar Desert, also called Great Indian Desert covering some 200,000 square kilometres, and its blue hues are in pleasantly striking contrast with the barren and dusty views of the Indian landscape.

If you like some camel riding, visit the Thar Desert, on the edge of Jodhpur city and enjoy a safari around Osian, ancient town at about 60 km from the city boasting also some 1000-year-old temples (Jain and Hindu).

Where to stay, the best hotels in Jodhpur

RAAS Jodhpur. One of the best (and most expensive) hotels in Jodhpur is the exclusive RAAS Jodhpur. Among the amenities of this beautiful boutique hotel are a modern spa, a swimming pool, complimentary WiFi access, 24-hour room service and two dining options. The stylish rooms feature air conditioning, flat-screen TV with satellite channels, and a seating room.
Click here for more details and current prices for RAAS Jodhpur.

Chhotaram Prajapat. Located in Salawas village, Chhotaram Prajapat is a resort surrounded by the Indian countryside. Perfect place to enjoy the local wildlife early morning and the real rural life in India. This homestay provides simple rooms, bathroom toiletries and can arrange a pickup to and from the closest railway station in Jodhpur. Vegetarian and Rajasthan cuisine are served at the in-house restaurant.
Click here for more info and current prices for Chhotaram Prajapat.

5 thoughts on “Best places to visit in Jodhpur, India”