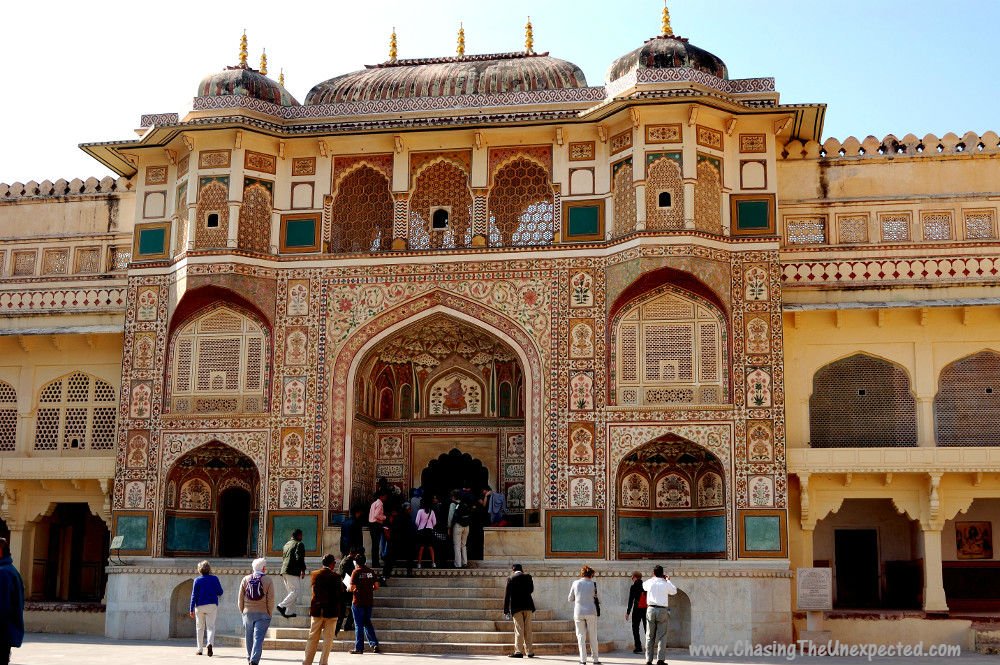 One of the first things a foreigner notices when landing in India is the burst of colors that makes the country a photographer’s paradise. One of the cities of “Golden Triangle” alongside Delhi and Agra, there are so many places to visit in Jaipur that one day is hardly enough. So, if you are embarking on a trip to Rajasthan, do plan at least two days in the Pink City.

In the only state of Rajasthan, you will find the Blue City, the Golden City, and the Pink City, a burst of colors, scenic views and majestic forts, one of the jewels of Indian tourism and one of the best places in India for solo female travellers. This article will reveal our best suggestions of the things to do in Jaipur, the Pink City of northern India, with its colorful palaces and diverse handicraft.

Places to visit in Jaipur

Amer (Amber) Fort, also known as Amer Palace, is definitely one of the first places to visit in Jaipur. Located in the town of Amber, some 11 km from Jaipur, please don’t climb the hill by riding an elephant. They say it’s how the Raj used to reach the fort but let’s be honest, will this really give us a royal feel or look? No, it will just break the elephant’s spine. There’s a much more convenient way to climb to the beautiful Amer Fort: by car.

The Amer Fort is a beautiful series of palaces and buildings commissioned by Raja Man Sing in 1592 and later expanded and renovated by Raja Jai Sigh I. Built in red sandstone and marble, it overlooks Maotha Lake, the interiors are elegant and finely decorated with carvings and paintings, a charming interplay of Islamic and Hindu architectural styles. Among the buildings you can’t miss once you are at the Amer Fort are the “Sheesh Mahal”, “Diwan-i-Aam” (Public Audience Hall), and “Sukh Mahal”. The Fort consists of many pavilions, halls, “Ganesh Pol” gate to the private royal apartments, and the temple of “Shila Devi”.

Among the places to visit near Jaipur, there is also Jaigarh Fort. Built with red sandstone between the 15th and 18th centuries by Mirza Raja Jai Singh, ruler of the Kachwaha Rajputs, in 1621, one of the Kachhwaha rulers of Jaipur, it’s located some 10 km from Jaipur on the same hill of the Amber Fort, from where you can stare at breathtaking views.

Sometimes called “Victory Fort”, this majestic structure shows the main elements of Indian medieval military architecture, including bastions, palaces such as fresco-adorned Laxmi Vilas Palace, defensive battlements, a large 6-mt-long cannon, Jai Vana, weighing some 50 kg and with about 35 km of shooting range, a museum displaying the royal family’s belongings, and two temples, one devoted to Lord Rama and one to Kala Bhairava.

UNESCO-listed Jantar Mantar is a huge sundial beautifully carved out of stone and must absolutely be included in your Jaipur sightseeing.

Built by Raja Jai Singh II, the City Palace is one of the most popular tourist places in Jaipur. By entering the area, you will be introduced to the huge royal complex by the sight of Mubarak Mahal (Welcome Palace), one of the buildings to visit here for its great collection of textiles inside the Maharaja Sawai Mansingh II Museum. Part of the complex located in the very heart of the city are gardens, courtyards, and other buildings showing artistic and architectural features from different periods and styles, both Mughal and Rajasthani.

Among the buildings to visit in the City Palace are the Diwan-i-Khas (Hall of Private Audience), the Diwan-i-Am Art Gallery, the beautiful Pitam Niwas Chowk courtyard and the private palace Chandra Mahal.

The quintessence of Rajput architectural style, head to Hawa Mahal once during the day and at least once at night to take beautiful photos.

With some 953 windows aimed at protecting the ladies of the royal families by allowing them to watch local festivals without being seen by strangers, Hawa Mahal (Wind Palace) was built in 1799 by Maharaja Sawai Pratap Singh. A 5-story screened porch made of red and pink sandstone, this is one of the best places to see in Jaipur. Part of the women’s sections of the City Palace, its interiors include large courtyards, one single room behind most windows, and slopes connecting the different floors.

Located around 6 km from the center of the Pink City, the scenic Jal Mahal (water palace) is definitely a must-see in Jaipur. Wanted by Maharaja Madho Singh I as a place to host his duck hunts, Jal Mahal is in the middle of the Man Sagar Lake, and out of its five floors, four underwater, making only the top floor visible from outside. Many of Maharaja Madho Singh I’s successors added some more elements to the original structure, contributing in making it the impressive building we see today.

Located at the foot of Aravalis hills is another of the places to visit in Jaipur, Nahargarh Fort, one of the most popular forts in Rajasthan for its history, architecture and the fantastic view of the Pink City you can admire from there. It was built by Maharaja Sawai Jai Singh II in the 18th century and its original name was Sudarshangarh Fort. It was later given the name of Nahargarh, “abode of tigers,” because tigers were often seen around the site. An extended wall connects Nahargarh to Jaigarh Fort, and both of them are very famous Jaipur tourist attractions.

Part of the Vaishnavite Ramanandi sect, Galtaji temple was built in the 18th century by on top of an ancient pilgrimage site for Hindus and is one of Jaipur attractions worth a stop. Sometimes called “Monkey Temple,” it was built in pink stone and includes several other temples. Located on the Aravali Hills surrounded by a lush vegetation, Galtaji temple attracts its visitors for its fine paintings and pillars. Try to visit around mid-January, when the weather is ideal and pilgrims flock to bath in the holy waters nearby.

Feel the vibe and a taste of real Rajasthani culture at Chokhi Dhani themed village, definitely one of the best things to do in Jaipur if you want to delve into the local traditions, including cuisine, music, and dances. Surrounded by lush greenery, at Chokhi Dhani you can enjoy traditional Rajasthani dishes, live shows, and a true break from the hectic city traffic. Chokhi Dhani is also a wonderful 5-star resort complete with shops, disco club, spa, swimming pool and outdoor barbecue. Alongside being pampered with a VIP service, you will have a feel of the traditional Rajasthan village.
Click here to read more reviews for the 5-star resort and see the current rates.

The local handicraft in Jaipur India, includes anything from jewelry made with precious stones set in gold and silver ornaments, colorful textiles, gorgeous pashminas, cushion covers, bags and clothes, fine and sophisticated marble artwork, carpets, pottery, wooden furniture and even paintings, all forms of art that are deeply embedded in the state’s history and traditions, making for a great part of their cultural heritage as much as the palaces and buildings do, all redolent of their royal past.

Known also as the city of the Maharajas, Jaipur, alongside the whole Rajasthan state, boasts a great craft industry that employs many local workers who contribute to preserving and promoting their heritage. Visit places such as Johari Bazaar and Tripolia Bazaar for precious stones and jewelry, Chandpol Bazaar and along Mirza Ismail Road for handicraft and marble and wooden objects, while for the blue pottery one of the recommended places is Nehru Bazaar.

We all know it, where you stay can make or break your holiday. We have made a selection of the best hotels in Jaipur to make your trip more comfortable and relaxing.

Among the hotel’s facilities, guests can enjoy an outdoor pool, a spa, and a fitness center. The rooms of this five-star hotel in Jaipur are decorated Indian style and feature a flat-screen TV with satellite channels, luxurious bathrooms with a bathtub, bathrobes and free toiletries, a minibar, and tea/coffee-making facilities.

The hotel provides several dining options serving local and international cuisine as well as Marigold bar for drinks and La Patisserie bakery with a tempting choice of cakes, pastries, and bread.
Click here for more reviews and to see the current prices.

One of the best heritage hotels in Jaipur, Taj Rambagh Palace is a luxurious resort that delivers to the most demanding guests. One of the former residences of Jaipur’s royal family, this beautiful 5-star hotel is a perfect example of local Indian architecture and guests can enjoy indoor and outdoor pools and exclusive spa treatments, yoga classes, and a fitness center.

The air-conditioned, elegant rooms feature a safe, a minibar, flat-screen TV, and modern bathrooms complete with both shower and bathtub. The hotel’s different restaurants serve Indian cuisine, light meals, a selection of drinks and cocktails as well as traditional afternoon tea.
Click here for more reviews and to see the current prices.

Among the cheap hotels in Jaipur, Shahpura is one of the favorites. Built in perfect Rajput architecture with a mix of Mughal and Indian styles, and boasting a lovely facade with domes and frescoes, Shahpura House features amenities such as a large pool, spa and wellness center, and free WiFi all throughout the property.

The finely furnished rooms are complete with luxurious bathrooms with a bathtub and a shower, a flat-screen TV and a minibar. At the on-site Sapphire Restaurant you can order a fine selection of both Indian and international dishes, while for a more traditional Indian food, the hotel features alfresco Rasa dining, while for a buffet dinner with live music and a laid-back atmosphere, the Terrace Restaurant is a perfect option.
Click here for more reviews and to see the current rates.