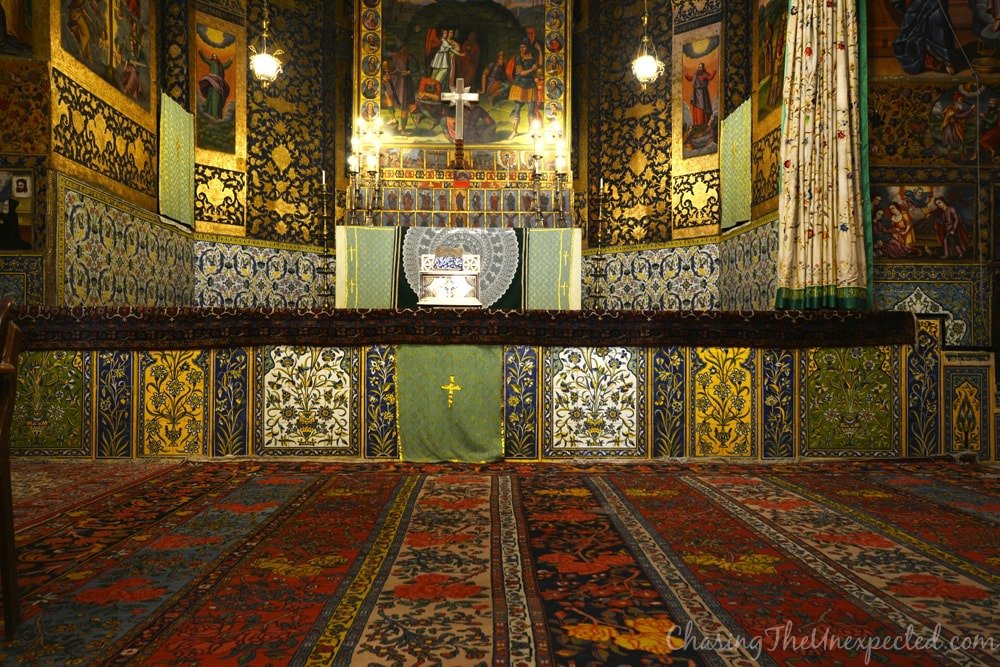 Alongside the Islamic and Persian landmarks, one of the most visited places in Persia’s ancient capital Isfahan, and one of the must-see sights of every Iran classic tour is the Vank Cathedral, also called of the Saint Savior, in the city’s Armenian district of New Julfa.

The Armenian community in Isfahan

Isfahan has a long history of welcoming the Christian Armenian community. And the reasons are many, from the war with the Ottoman Empire to the great art skills Armenians always showed. The foundation of New Julfa and the construction of the Vank Cathedral have been crucial in the developing and the decoration of the city of Isfahan.

Foundation of New Julfa in Isfahan

Named after the city of Julfa in Armenia, the quarter was created by Safavid-dynasty Shah Abbas the Great. This was the result of the deportation of thousands of Armenians between the 1603 and 1605 after the war against the Ottoman Empire.

What today looks like a cosy and quaint neighbourhood was very much welcomed by Shah Abbas I. He had always shown much appreciation for Armenians’ knack for arts and craftsmanship, very well-known in the region.

The building of Cathedral

Started around 1606, the Vank Cathedral has been one of the very first churches built in New Julfa. Today it certainly is its most important religious building.

Completed with important additions in 1655 and 1664, while the exterior appears rather bare and simple, inside it offers a striking contrast. Fine paintings on the walls and ceiling and a dome that recalls Persian mosques decorate the cathedral’s interior.

To complete the Christian scene and recall more of the Armenian heritage, inside you can see a semi-octagonal apse and a raised chancel typical of Western churches.

The exterior recalls a local style. The pastel hues, in fact, are typical of Persian desert architecture with its fascinating interplay of sand, light blue and white. We can see examples of this in the beautiful Yazd Grand Mosque and the unusual main mosque in Natanz.

Inside the Vank Cathedral, it’s also easy to spot elements from Persian-style decorations with flowery patterns and bright colours. The Armenian church is defined by a fascinating mix of architectural styles. One of the reasons why it’s one of the places to visit in Isfahan.

The Christian complex around Vank Cathedral

It was built in the moment of greatest splendour of the Safavid dynasty under the rule of Shah Abbas I. After him, the power of his family began to fall relentlessly.

As it happens in most migration waves, thousands of Armenians died in the journey. The rest of the refugees started building cemeteries alongside their churches to carry on with their religious rituals and ceremonies. This was possible thanks to the great religious freedom they were granted with by the Persian shah.

Inside the same complex of the Vank Cathedral, lies a graveyard that hosts the remains of clerics and ordinary people.

Apart from the church and the graveyard, the complex includes a memorial to the massacre carried out by the Ottomans and a museum. Here you will see artwork, precious and sacred objects belonging to the Armenian tradition, tapestry, documents, books and maps most of which recalling the Armenian genocide.

Iran, too, is the theatre of preparations, both religious and more mundane, for the yearly Christmas celebrations that, according to the Armenian tradition, falls on January 6th. Oriental Christians, in fact, kept the original tradition of Christmas while western Christianity adopted the Roman customs. Rome was more prone to reproduce the celebrations around the winter solstice as they were more familiar also due to the Mithraic rituals of Persian origins.

Even though I’ve been to Julfa more than once, I’ve never seen the Armenian Christmas. One of the reasons I would gladly organise one of my next Iran trips around the end of December is to enjoy the different rituals that take place on the occasion of the winter solstice, December 21st.

Apart from Christian rituals, in fact, I would love to witness Yalda, the year’s longest night. Here Iranians gather around an opulent table filled with season fruits, food, and nuts, and read Hafez’s Divan.

With all these festivals and celebrations, all excuses are welcome to make me book yet another Iran trip any time of the year.

To complete the view of the life the important Armenian community in Isfahan has built, I suggest spending a couple of hours or even half a day here.

Wander around the streets of New Jolfa district. Starting from the cathedral, after learning about its architecture and the history of the Armenians, enjoy its culture.

Explore the main roads as well as the smaller alleys. You can stop at their delicious cafes (Firouz is one of my favourites), and have a meal at one of their restaurants. I enjoyed my lunch at Hermes in East Nazar Street. Before leaving Jolfa, don’t forget to buy some bread and pastries from their traditional bakeries, they are delicious and can make for a perfect afternoon snack.