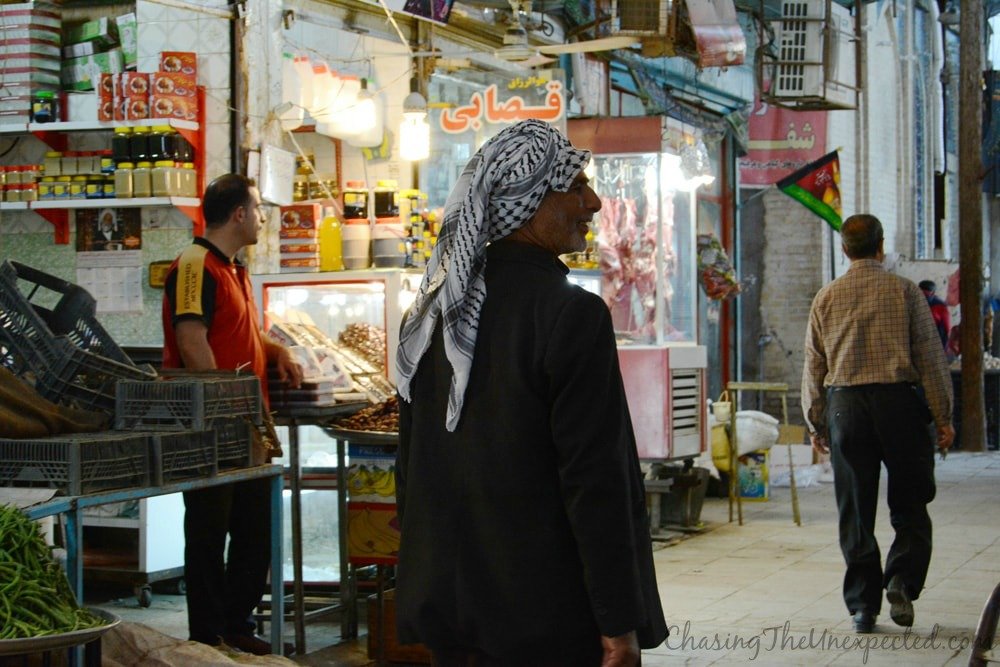 Known as one of Iran’s most polluted provinces, southwestern Iranian province of Khuzestan, bordering with Iraq and the Persian Gulf, encompasses a collection of contrasting social mores, different ethnic minorities and an appetizing wealth of natural resources, especially oil, making it one of the provinces on which the national economy largely depends on.

Having mainly visited tourist places such as Isfahan, Yazd or Tehran itself, as soon as we crossed the imaginary line dividing Khuzestan province from Lorestan I felt it was a different world. Home to a large Arab Iranian community (its previous name was Arabestan), this was the only place where I saw women fully covering their face, even though in Iran it’s illegal.

With the earliest settlements believed to date back to 6000 BC and the first urban centers to 4000 BC, Khuzestan was the heart of the Elamite empire that established its capital in Susa, ancient city today enlisted among the UNESCO world heritage sites. As it often happens when I explore places that are new to me, an ancient historical site defined my first form of communication with the province of Khuzestan, relation that I’m still processing as it has by all means been the most difficult region of my Iranian journey so far.

An expansive panorama of distinctive historical layers offers the best introduction to a province that locals like to describe as the cradle of Iranian civilization where it all started, even though this is a record every Iranian province claims. Bearing the relics and vibe of the country’s different periods and cultures including the Parthians and the Persians, Susa consists of archaeological remains of urban structures and buildings, some of which have been identified as the palaces of Achaemenid kings Darius and Artaxerxes, and the Ardeshir’s palace.

Susa is not the only UNESCO-listed site Khuzestan boasts, and the nearby ancient city of Chogha Zanbil, originally Dur Untashi, built in 1250 BC under Elamite ruler Untash-Gal is another claim to fame locals cling onto to defend their status of regional founders and creators.

A stormy past of conquests, mutual invasions, wars and countless battles outlines the history of the region, and in Khuzestan probably more than other provinces, you can sense the flavor of turbulence. Truth be said, the proximity to Iraq, referred to as Karbala (کربلا) on the road signs for the not-so-remote Iraq Iran war, very much alive in people’s memories and talks, does play a role in forging this obstreperous character.

“I can never forget the times of war,” told me Zohreh, a tour guide in Khuzestan, still cringing with anxiety at the mere thoughts of it. “I was in high school and one morning, Iraqi shelling on my village blocked the door of my classroom preventing us from leaving. I thought this was the end, we hid behind a wall and waited for a miracle. When the miracle arrived and someone opened the door we rushed outside just to see the mangled bodies of kindergarten children, main victims of that tragic morning, their bodies in pieces scattered all around the playground. I still have nightmares.”

“My uncle is a martyr of the Iraq Iran war,” added Ali, young Arab Iranian who welcomed us in his family’s mozif in Bardiyeh village, a traditional hut-like structure where families receive their guests with the inevitable cup of tea.

When Saddam invaded Iran in 1980, he was hoping he could count on tribal solidarity to push the Arab Iranians to join the fight by his side and turn their back to the regime of the newly established Islamic Republic. It didn’t take long, though, for him to understand that he had counted his chickens before they were hatched. The Arabs on this side of the border showed unequivocally their position, defending their own country from the Iraqis, become foreign all of a sudden, by volunteering with a makeshift war strategy even before the Iranian army recruited them.

Similarly, Saddam showed little to no ethnic sympathy, and in less than no time, the Iraqi army started bulldozing flat entire cities in Khuzestan to allow a better further view, and bombing and contaminating the area with mines and deadly chemical weapons. The outcome was twofold: a soaring resentment against the neighbouring Arab country and a tighter consent of Iranians around the fatherly figure of Imam Khomeini.

Every family in Khuzestan counts one or more relatives among the war casualties, their wounds far from being healed.

Proudly speaking Arabic, women ambling about in their abayah (loose full-length garment usually black) or sometimes niqab (abayah but with face covered), men with a keffiyeh, typical Arabs’ head cover, both Shushtar and Ahvaz gave me a different vibe than what I had previously experienced in other Iranian cities.

From a rumor of hostility towards tourists that during our stay didn’t prove to be true, to an almost exclusive men’s presence in day and night open markets, to being quite stared at especially after they realized I wasn’t Iranian, our adventure did feel more challenging than the usual tourist trail.

Although I hadn’t planned it, I happened there right before Arbaeen, the ceremony Shia Muslims attend in Karbala to commemorate the martyrdom of Imam Husayn grandson of Prophet Muhammad in 680 AD, after forty days of mourning and grief celebrations started with Ashura, the tenth day of Muharram.

Iranian pilgrims reach Karbala on foot every year, and the closer we got to the border, the more pilgrims we ran across, the more cups of tea we were offered at the several temporary mozifs arranged on the side of the road to provide refreshment and rest for the travellers.

An intriguing sequence of mourning ceremonies, songs, prayers, whimsical plays even, were the main features that welcomed me in Khuzestan, one of the most conservative areas I’ve been to while journeying an already pretty conservative Iran.

A sense of roots and belonging, a strong religious spirit that permeates the air wherever you are, a plethora of conflicting microcosms and layers of social expectations make this a challenging province, not really for me that I was quickly passing by but especially for the Iranian leadership whose duty is to meet the country’s diverse needs and demands.

“We are all Arabs, we are all brothers,” was Ali’s response when I asked him if they felt resentful towards the Iraqis living just a stone’s throw away and that not so long ago waged war to the same people today share tea and prayers with. Some don’t understand him, others do, it’s hard for sure to chit-chat with the same people whose bombs twenty years ago killed your little brother, but “what can we do?” they retort.

This is one of those moments when whatever you say is wrong, so the best thing you can do is limit yourself to listen, whether you understand or not, you approve or not. The only thought everyone shares and agrees on is always the same, the absurdity of war that no one likes and no one wants.

6 thoughts on “The open wounds of Iran’s Khuzestan”