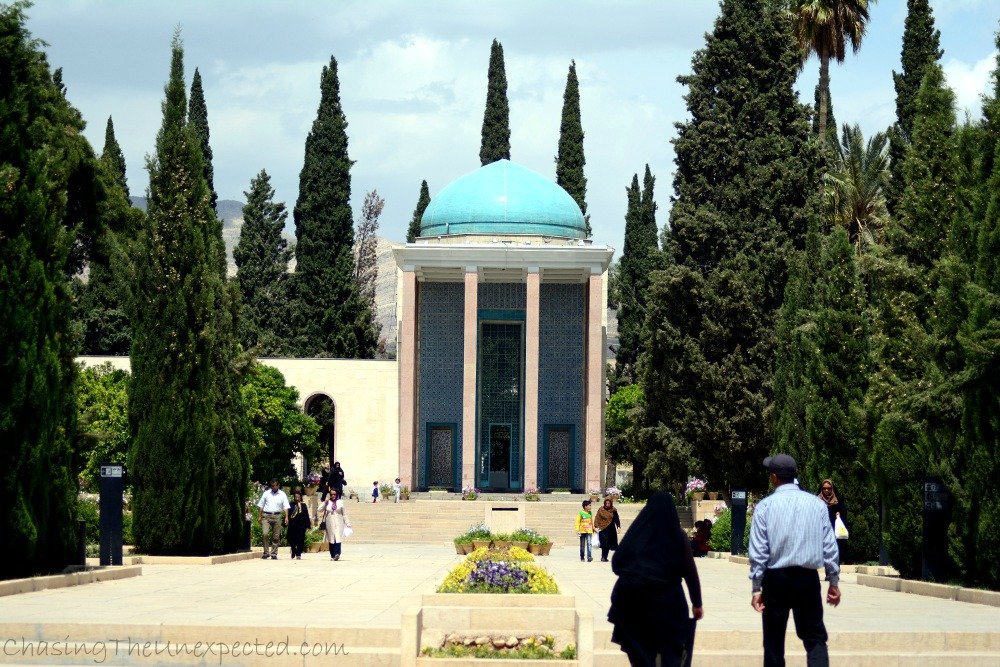 “A traveller without observation is a bird without wings”

Being this one of my favourite travel quotes, could I go to Shiraz and not visit Saadi’s mausoleum? Of course not.

Saadi, nom de plume of Abū-Muhammad Muslih al-Dīn bin Abdallāh Shīrāzī, is one of the most appreciated poets of medieval Iran. In his writing, he mentions often a lifestyle of travelling, and his wisdom wasn’t just his intuitive spirit but stemmed from some 30 years of travels. Since we are talking about the thirteenth century, his were real travels, on foot, on some sort of carriages, camel, donkey or whatever means they might have had at the time, but certainly not via quick flights.

This, apart from being a much slower path than our average trip nowadays, allowed him to better blend and integrate with the locals he managed to meet along the way, resulting in an inevitable greater insight in the cultures he dealt with. With such a huge part of his life spent on the road, it goes without saying that Saadi went back to his hometown Shiraz with a great deal of wisdom and knowledge of life, the kind of awareness that makes for inspiring poetry.

“Why should possessors of enjoyment and luck
Bear sorrow for fear of distress?
Go, be merry, my heart-rejoicing friend.
The pain of tomorrow must not be eaten today.”

From The Effects of Education

Among his most famous works are the Bostan (The Orchard), where he highlights the virtues every Muslim should cherish, such as justice and modesty, and the Golestan (The Rose Garden), devoted to life, his personal story and the human condition in general, not least the same human absurdity portrayed with humour and witty insight.

“A liberal man who eats and bestows is better than a devotee who fasts and hoards.”

From Rules for Conduct in Life

Saadi’s tomb is a simple, sleek, pastel-hued building that lies in a typical Persian garden with a long perspective, water, colours and fresh flowers as key players. Its walls decorated with flowers and scripts of his poems, the interior is peaceful and inspires spiritual as well as worldly edification, just as Saadi would have wanted.

READ MORE: Check out more places to visit in our guide to the things to do in Shiraz.

Here I leave you with more shots from his shrine and some of his century-old, yet topical verses.

Adam’s sons are body limbs, to say;
For they’re created of the same clay.
Should one organ be troubled by pain,
Others would suffer severe strain.
Thou, careless of people’s suffering,
Deserve not the name, “human being”.

4 thoughts on “Pearls of travel wisdom from Shirazi poet Saadi”