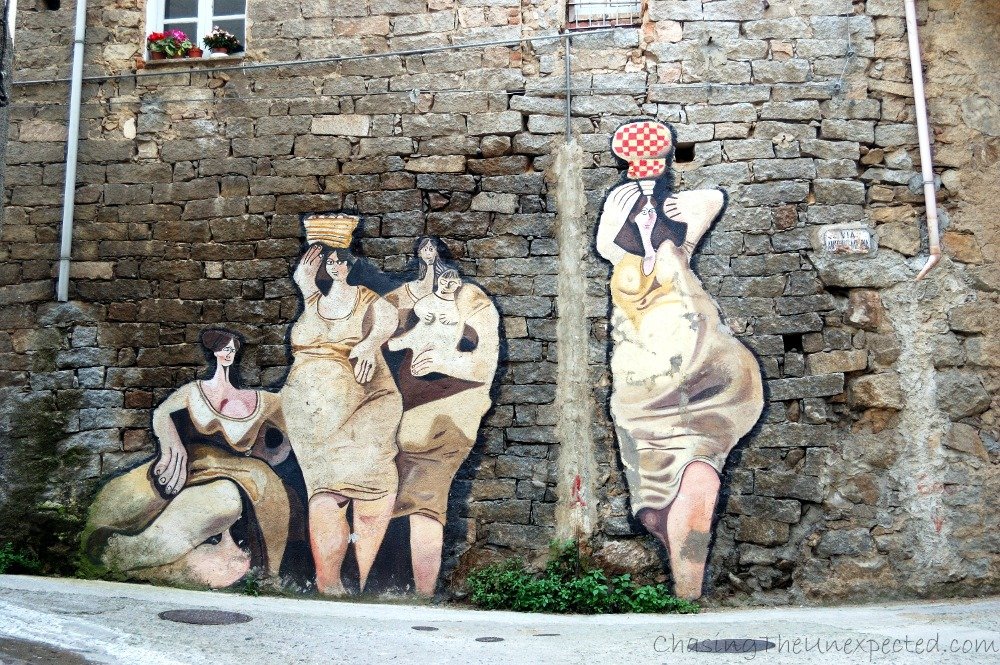 It’s that time of the year again. Sun, warm weather, summer vacations approaching, yet you haven’t decided where to spend your annual leave. One of the most popular tourist destinations, you might as well join the crowd and travel to Italy. However, if you do wish to travel to Italy but are allergic to big crowds, I suggest an alternative holiday to discover the magic of the real Sardinia.

Often, when it comes to spending summer in Sardinia the first thoughts go to its famous Emerald Coast which, for as beautiful as it is, it’s not the best place if you come to get to know the island and its people. And this comes from a local, yours truly, so you can believe it.

So I came up with a list of ten places to go if you want to unearth real Sardinia, but by no means, this claims to be an exhaustive list. However, while it’s only the beginning of your path towards planning some perfect Sardinia holidays, it will make you fall in love with the island and certainly want to come back to see more of it.

READ MORE: Plan a perfect trip and a dream holiday to Sardinia with our precious tips.

Are you ready for the beginning of the journey around authentic and real Sardinia?

Where to go on your holidays in Sardinia? Try Seneghe

Do you like great food, mountain and sea? Then the quaint and lovely hamlet of Seneghe might as well be your ideal destination for an authentic Sardinia holiday.

Famous for an extra-virgin olive oil that will change forever your concept of salad dressing, Seneghe boasts incredibly delicious cakes, cookies and all types of sweets, along with its other delicacies.

What about the mountain and sea combination? This little town is built on the valley of a hill belonging to the mountain range of the Montiferru, where different areas bear different names. From here, apart from enjoying the typical unspoiled vegetation of the Mediterranean woodlands, you can stare at a beautiful view of the island’s western coast.

Looking for hidden beaches in Sardinia? S’Archittu is a gem

I get it, you made it to the island and don’t want to miss a jaunt to one of the beaches in Sardinia that make its coastline so famous. Instead of immersing in a crowded sea resort, you would like a secluded haven. Fair enough. On the island’s western coast, at about 130 km from Cagliari, Sardinia’s main city, lies S’Archittu, a little-hidden sea resort. Within this hidden gem, there is an even more hidden beach reachable via a short walk through a rocky path, made it pleasant thanks to turquoise crystal waters on your left. You couldn’t end your Sardinia holiday without a dip, so here you are!

⇒ Tip: Rent a car to travel around and explore Sardinia!

Do you want a Sardinia holiday surrounded by tradition? Orgosolo is your choice

Controversial, wild and utterly beguiling, the town of Orgosolo is mainly known for its stormy past and famous city council building covered with bullet holes as an illustration of the obstreperous spirit of the place. Known as the village of bandits mainly for their struggle against the occupiers when Piedmont royal family decided that Sardinia would have made it for a nice backyard, Orgosolo is famous also for its beautiful murals, most of them heavy in political and anti-imperialist messages. From here, or nearby town Dorgali, you can also organize a day out to the gorgeous Gorroppu canyon. In the Barbagia region, you will secure a fascinating and authentic Sardinia holiday.

A wonderful plateau that originated some 3000 years ago on top of two extinct volcanoes, Parco della Giara can be reached from different villages, such as Tuili, Gesturi, Setzu and Genoni. Beautiful expanse of local vegetation and native wildlife, from birds to wild pigs, the real stars of Parco della Giara are the small horses, as small as they were about 10,000 years ag when they stopped evolving and decided they actually wanted to keep their look as it was. This is a very suggestive place to visit and discover the real Sardinia, whether you are passionate about nature, history, evolution, science or just walking through untouched surroundings. Depending on the season you will be able to enjoy different colours and smells.

Quaint town further embellished by stunning murals, San Sperate is famous for its delicious peaches, for which a local festival (sagra) is organized every year at the beginning of the season, the exquisite honey production and the world famous sculptor Pino Sciola, whose sounding (and bleeding!) stones make for a spellbinding experience. “Giving us the sound of the universe,” Sciola used to say, “stones are the backbone of the planet, present since time began, they’ve always existed and they always will.” Less than 20 km from Cagliari, after you enjoy your colourful stroll around San Sperate, do visit Pino Sciola in his house-lab or his open-air museum located near the countryside, where your senses will be charmed by the otherworldly sounds of his stones.

Not far from Cagliari, Sant’Antioco is Sardinia’s southernmost island and quite a popular spot, especially for a summer vacation. However, there is a hidden gem that many tourists (and locals) don’t know about, the museum of the byssus managed by Chiara Vigo, the only woman on the planet who still weaves the sea silk. A fascinating form of art hailing from somewhere in ancient Mesopotamia, the byssus is a fine fabric produced out of the velvety strand of an endangered seashell native of the Mediterranean Sea. Coming from a family of artists (or masters, as she likes to point out), Chiara doesn’t sell her work. Instead, she donates the precious fabric to museums, galleries, popes and presidents. Between a stroll in the lagoon and a swim in the sea, don’t miss a visit to Chiara’s workshop if you want to get the feeling of ancient Mediterranean civilizations and real Sardinia.

Ghilarza, for a trip into the authentic Sardinia

Famous for its skilled bricklayers, Ghilarza is known for being the town where Italian politician, writer and philosopher Antonio Gramsci lived before being imprisoned by the Fascist regime in 1926.

Nestled between beautiful Omodeo Lake and Chenale valley, Ghilarza is a dynamic little town in mainland Sardinia worth a stop both for its traditional houses and historical places such as an Aragonese tower, and because, being located in the very heart of the island, from here you can easily reach all the other destinations in your itinerary.

As a curiosity, Ghilarza is surrounded by tiny little villages, almost ghost towns, that are inhabited only once a year for 9 days to one month during the celebrations of the festivals devoted to the saint each village is named after, be it Saint Michael (San Michele) or Saint Seraphim (San Serafino) among the others. With a stop in this are, your Sardinia holiday will acquire that authentic twist impossible to catch if you limit your stay to the coast.

Festivals and horse races, a Sardinia holiday is not complete without visiting Sedilo

Not far from Ghilarza, basically on the other side of the man-made Omodeo Lake, lies Sedilo, traditional town where guests are sacred entities and every saint in the calendar is a good occasion to organize a festival. The reason why your summer holiday here will become a great collection of parties, late nights and concerts.

The main festival is undoubtedly S’Ardia, a spectacular and reckless horse race where some 80 horses dart down a dangerous trail in the countryside just outside the village and around the sanctuary of Saint Constantine, whom the whole 3-day feast is devoted to. S

edilo will help you unearth the real Sardinia also through its important archaeological site, the Iloi complex, comprising of a nuraghe (bronze-age stone tower) and a giants’ tomb.

Close to Orgosolo, also in the Barbagia region of Nuoro province, is Mamoiada, lovely town known for its delicious crunchy thin bread (carasau), its excellent production of Sardinian red wine Cannonau and the grotesque masquerade of the Mamuthones, fascinating masks that come out only a few times a year, the first time being in occasion of Saint Anthony festival on January 17th and then for Carnival celebrated 40 days before Easter. Much for an authentic Sardinia, Mamoiada is not only this. If you are a history lover you can also enjoy its prehistoric ruins of fairies’ houses and giants’ tombs.

Finally, it’s spa time. Whether you enjoy delving into ancient ruins or pampering yourself with fancy treatments, Fordongianus is the place for you.

In fact, here a modern spa centre providing all types of treatments, from mud therapy to balneotherapy to relaxing in the thermal baths rich in healing properties, sits just beside the ancient baths dating back to, wait for it, Roman times.

Unsurprisingly, one might say, since Romans were pretty famous for their knack for overindulging in spa treatments. Located on the plain of the Campidano Oristanese, Fordongianus lies between Cagliari and Nuoro, just after a detour from the main 131 highway. This is definitely one of the places to visit in Sardinia.

Travel tips for your Sardinia holiday

Rent a car. For as beautiful as it is, Sardinia is not exactly known for its efficient public transportation, so when you organize your trip beyond modernity and in the quest for the primordial, your best bet is the rent a car with the many car rentals available in the island’s airports, such as Hertz.

Book in advance. Summer is a packed season with pretty high prices, so if you want to make sure you find vacancies in the hotels in Sardinia and want to still have a good choice for the prices, start planning in advance.

How to get to Sardinia

Sardinia is connected to many European capitals and main cities with direct flights operated by most European airlines such as Alitalia, Easyjet, Ryanair, Volotea, Lufthansa and others, depending on where you are departing from, or come by ferry. Through the search engine below, you can book your ferry to any city in Sardinia, be it Cagliari, Olbia, Porto Torres, Golfo Aranci, Santa Teresa and even Arbatax, from whatever city you are at, either Rome, Barcelona, Bonifacio, Ajaccio, Genova, Livorno, Marseille, Nice, Toulon, Palermo or Savona.