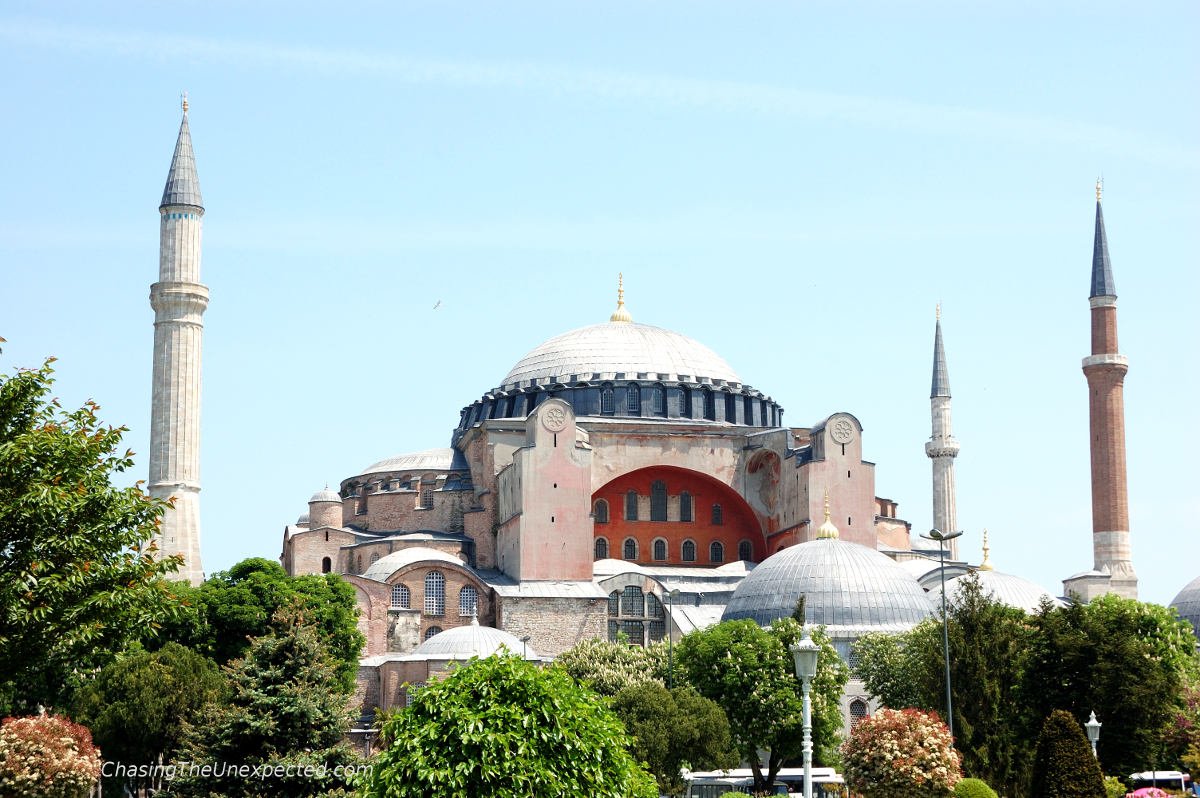 “See Naples and die,” the phrase widely attributed to the German poet Wolfgang Goethe, can be reinterpreted and perfectly applied to Istanbul. Former Byzantium, the ancient capital of the Eastern Roman Empire, renamed Constantinople by Emperor Constantine, this fascinating Turkish city amazes visitors with its layers of history, hectic bazaars, and friendly people. Are you planning a trip? Here is what you can do in 4 days in Istanbul.

Named the European capital of culture in 2010, there are many things to do in Istanbul that earned the city its fame among the other cities of the Old Continent and made it one of the must-visit places in most of the best Turkey tours. Trying its delicious food and exploring the sophisticated collaborations of different styles, traditions and civilizations are only some of the activities in Istanbul you shouldn’t miss if you are there for four days, or even only one or two.

What to do in 4 days in Istanbul – An easy itinerary

Kick off your 4-day Istanbul itinerary from its central district Sultanahmet dominated by the city’s most acclaimed wonders staring at each other: beautiful Ayasofya and the awe-inspiring Blue Mosque. Even though the undisputed stars of all Istanbul tour packages, Hagia Sophia and the Blue Mosque are far from being the only places to visit in Istanbul.

Going down the Basilica Cistern, haggling and shopping in the many bazaars, a cruise along the Bosphorus, or just sitting on the shore to smoke a hookah and sip on some black tea, after enjoying dinner with kebab or the delicious Turkish pide, are some other top things to do in Istanbul in 4 four days to fully enjoy the vibe this beautiful and historic city has to offer.

My trip to Istanbul was for only four days, but I tried to see and do as much as I could. If you are traveling on a budget, you might want to consider the free tour of Istanbul organized by Turkish Airlines.

Visit Hagia Sophia (or Ayasofya), a must even if you have only one day in Istanbul

Ayasofya (Hagia Sophia) is one of the world’s most stunning architectural masterpieces and is unmissable even if you can stay only 2 days in Istanbul. Centuries of artistic schools overlap, solemnly offering their contribution to the world of arts with its finest mosaics, including the famous Christ flanked by John the Baptist and the Virgin Mary.

Built in 532 AD, the cathedral remained the most important church within the Christian world until Constantinople fell under Turks’ rule in 1453 and Sultan Mehmet decided to turn it into an Ottoman mosque in 1931. Absolutely stunning, the Hagia Sophia dome, 55 meters high, is made from bricks and mortar.

They say when the Hagia Sophia dome was built, walls began to lean outward for the weight, so supporting walls had to be added. For its beauty and artistic styles, it is said to have changed the history of architecture.

Among the things to admire during your tour inside are the stunning Hagia Sophia mosaics and paintings. Since 1935 it has been open to the public as a museum and is one of the best places to visit in Istanbul for its interplay of styles and cultures.

The Blue Mosque, not to miss in your Istanbul sightseeing

Sultanahmet Camii, the local name of the Blue Mosque, stands aware of its timeless majesty in front of Ayasofya, giving the whole scenery the mysterious atmosphere of Scheherazade’s tales in the Arabian Nights.

One of the most popular Istanbul attractions, the Blue Mosque, owes its name to the cobalt tiles decorating the prayer room. The worship place is packed with tourists winter and summer alike, being exclusive Muslim prerogative only during the prayer time.

The suggestive beauty of softly-lit Sultanahmet by night is beyond imagination. Every attraction I visited made me gradually aware of how hard would have been to tear myself away from that half-European half-Asian jewel.

The city is studded with small, lesser-known mosques, each of them, samples of Arabian design. Five times a day, from every mosque the muezzin raise their voice to call the faithful to pray, filling the city with a captivating, ancestral lament.

Blue Mosque admission fee: Free
Blue Mosque dress code: Like in every other mosque, women need to be covered from head to ankles. Head covering is available at the entrance. Men can’t wear shorts but can wear t-shirts.
Cameras at the Blue Mosque: Allowed free of charge
Blue Mosque visiting hours: All day, except praying times and Friday from 12 pm-3 pm. Best time to visit Sultanahmet Mosque: Saturday-Thursday From 8 am-12 pm.
Note: The prayers take place five times a day and the mosque closes for 90 minutes every prayer time. You will need to take off your shoes before entering and carry them with you in a little plastic bag.

A cruise along the Bosphorus, one of the fun things to do in Istanbul

No Istanbul sightseeing can be considered complete without cruising along the Bosphorus, the stretch of water between the Sea of Marmara and the Black Sea that works as a natural barrier between the Asian and the European Continents.

After leaving Eminönü bay, we headed to the other side of the coast, managing to shipwreck on our way back, just to make sure to add the thrilling (and funny) ingredient to an already exciting trip.

Topkapi Palace, one of the top Istanbul places to visit

The Sultan used to make his way to the Blue Mosque from his residence, nearby Topkapi Palace (Topkapı Sarayı), the immense cluster of buildings that dominate wide, evergreen gardens with breathtaking views.

The palace contains the imperial treasures that offer a comprehensive glimpse of the luxury kings lived in, despite the general poverty of the rest of the population, as it usually happens when it comes to royal residences: emerald-studded golden cradles, precious silk clothes, relics of the Prophet Muhammad.

Topkapi Palace Museum visiting hours: 9 am-4.45 pm in winter, 9 am-6.45 pm in summer. Topkapi Palace is open every day except Tuesdays.
Topkapi Palace admission fee: For adults 72 TL (Turkish Lira) each person and you visit everywhere except the Harem Section. Ticket for the Harem and the Dormitories of Halberdiers is 42 TL. So if you want to see everything in the Topkapi Palace, you need to get two tickets 72+42=114 TL.
Free admission for children 8-year-old or younger except for the Harem. Here kids under 6 or younger enter free of charge. You can purchase the tickets online or at the entrance and pay either cash or with credit/debit card.
Cameras: Allowed.
Dress code: Topkapi Palace does not have a dress code.

Basilica Cistern, one of the most fascinating places in Istanbul to visit

One of the top things to do in Istanbul is motioning to the Underworld by visiting the Basilica Cistern. Humid, dark and fascinating, I suggest you don’t miss this even if you are in only 3 days in Istanbul, or even less.

Covering an area of almost 10.000 square meters, this large water storage has been built in the Byzantine period under the rule of Emperor Justinian I.

Get lost in Istanbul Grand Bazaar

Although most people barely speak a little English, bazaars’ shopkeepers will welcome you in every language, and at my usual question: “Where did you learn Italian so well?” the answer was unavoidable: “Here at the bazaar, of course!”

Even though very touristy, I absolutely loved dawdling about the Grand Bazaar, where I ended up buying only a small narghilé and staring at the traditional clothes, shoes, head-scarves, veils, that strongly reminded me of Samantha Stephens in Bewitched.

If you are not a master of bargaining, be aware that at the end of your visit to the Grand Bazaar you will have bought something you don’t need at a higher price than its real value.

My short stay was undoubtedly made more pleasant by the friendliness of Turkish people, who made even the most nerve-racking bargain a hilarious chat, ranging from flattering adulation to unpredictable proposals.

With some 60 streets and 5000 shops (but who’s counting), restaurants, hammam (Turkish baths), cafes and two mosques, the Grand Bazaar is one of the largest covered markets in the world and absolutely one of the most popular Istanbul attractions.

While I enjoyed my tour of the Grand Bazaar, I’m glad I made it also to Istanbul Spice Bazaar, a feast of colors, scents, spices, herbs, teas, and flowers. So if your Istanbul shopping spree is not over, head here to fork out some more cash.

Just like the main market, also at the Istanbul Spice Bazaar sellers spoke pretty much every language, and quite predictably, I bought tea and spices for a year.

I promise you will be carried away by the fragrances and the variety of goods and products from all over the world, especially in Asia.

You will find everywhere street vendors selling delicious simit, round bread covered with a sesame seed crust. Do try simit and get addicted as I did.

This is not the only street food they sell in Istanbul. We saw stalls of fresh cucumbers, chestnuts, corn cobs, fish sandwiches especially near the sea, wraps of veggies or meat, baked potatoes, and obviously some fantastic Turkish desserts.

You can order some of these also sitting in a restaurant, but probably enjoying them outside either on the shore of the Bosphorus or watching Sultanhamet landmarks is less time-consuming and more pleasant.

Climb up the Galata Tower

You can reach the top of the 14th-century Galata Tower by elevator if you don’t feel like climbing much. But do make sure you visit this imposing historical building to have a great view of many of Istanbul’s tourist attractions such as the worship places in Sultanhamet and the Bosphorus.

The tower is located in the Galata neighborhood filled with nice cafes and restaurants. So if you don’t feel like having your meal on the tower’s top floor, all around there are plenty of options to choose from.

Taksim Square, the modern side of Istanbul

After visiting all the must-see sites in the city center, my friends and I went to Taksim Square, to have a taste of what is less touristy Istanbul.

All of a sudden all the obsessive bargaining and tricks aimed at foreigners were gone. We experienced a tangle of narrow back alleys, studded with small, picturesque cafés and tea houses, and populated with friendly locals who were interested in simply saying ‘hi’ to travelers.

Needless to say, although I loved the city’s architectural majesty, I was completely captured by this more authentic ride, that was actually what makes me want to go to Istanbul again.

46 thoughts on “What to Do in Istanbul in 4 Days: Palaces, Spices and Bazaars”