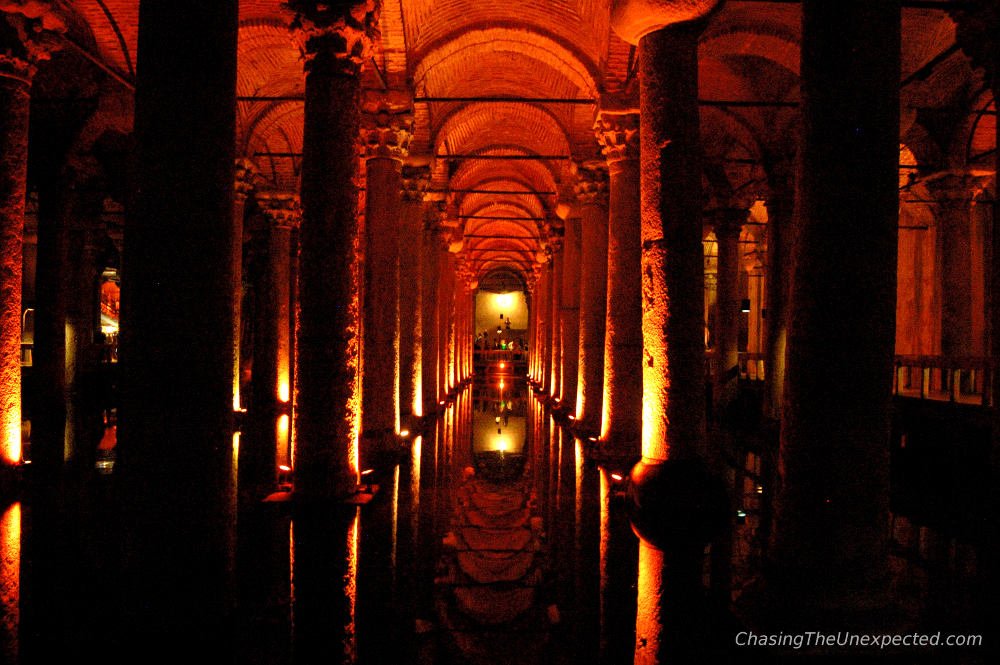 The Basilica Cistern is considered by many, tourists and locals alike, one of the best and most fascinating places to visit in Istanbul. Located in Alemdar Mh. Yerebatan, very close to the Blue Mosque, a visit to this underground Istanbul ancient landmark can take around 30 minutes, even a little longer if you love art and history and want to admire all the elaborate patterns, the details of its carvings and the forest of marble pillars that made for a fascinating backdrop for a scene of a James Bond movie From Russia with Love.

If you are staying only one day in Istanbul, it might be hard to squeeze the Basilica Cistern in as major landmarks such as Hagia Sophia, the Blue Mosque and Topkapi Palace are a must, but if you can spare half an hour, you will definitely add value and experience to your Turkey trip. A tip? Do visit this gorgeous underground gem if you are in Istanbul in summer, it will give you a well-deserved break from the city’s blazing heat.

Istanbul’s Basilica Cistern (Yerebatan Sarnıcı, “submerged palace” in Turkish) is the largest underground cistern in the beautiful Turkish city. Its construction dates to the 6th century during the rule of Byzantine Emperor Justinian to serve as water storage for his own palace and other buildings around it. Built right across the street from Hagia Sophia, this wonderful landmark shows the apogee of engineering and architecture reached during the Byzantine empire.

During the Ottoman rule, Basilica Cistern became the water storage for the magnificent Topkapi Palace.

The water stored in the Basilica Cistern came from the Eğrikapı Water Distribution Centre in the Belgrade Forest, less than 20 km from Istanbul. The large flow of water reached the city through 971 mt Valens Aqueduct and 11.545 mt Mağlova Aqueduct, also built under Emperor Justinian I.

The architecture of the Basilica Cistern

The construction, held up by 336 marble carved columns and covering 9,800 square meters, is utterly beguiling, and the two Medusa heads covered with snakes convey a mysterious look. Descending Istanbul’s Basilica Cistern opens up to a whole underworld beneath the modern street level.

The moment you walk downstairs, you will find yourself facing what looks like a magical colonnade. Look around and the seemingly endless columns will bring an instant effect on your mood. The sound, light effect, water and overall surroundings of the place take you to another world. It is dark but sure pleasant to wander around, away from the hustle and bustle of street level.

Visually magnificent, it’s yet another proof of the Romans’ expertise in building hydraulic systems, and its eastern half carried on with the tradition. It’s a mysterious place that, according to some research, took some 7,000 slaves to build for a capacity of some 80,000 cubic metres of water.

Your visit will take place along wooden boardwalks and you will see 336 massive pillars crowned with finely decorated Ionic and Corinthian capitals. Get off the corridor to admire the suggestive Medusa heads, one placed upside down and one at 90 degrees.

This is very suggestive also for the meaning of the Medusa in Greek mythology: a female monster whose hair was made of snakes and whoever would look at her directly in her eyes would become stone. It is probably a recycled piece of artwork from another palace or monument, but officially, its origins are unknown, adding to the mystery.

You will absolutely love snapping pictures of this suggestive underground cistern. It’s pretty dark so make sure your travel camera has a bright lens and a tripod.

How to visit Istanbul Basilica Cistern

READ MORE: Best things to do in Cappadocia, Turkey

4 thoughts on “The Basilica Cistern, Fantastic and Unusual Place to Visit Underground Istanbul”