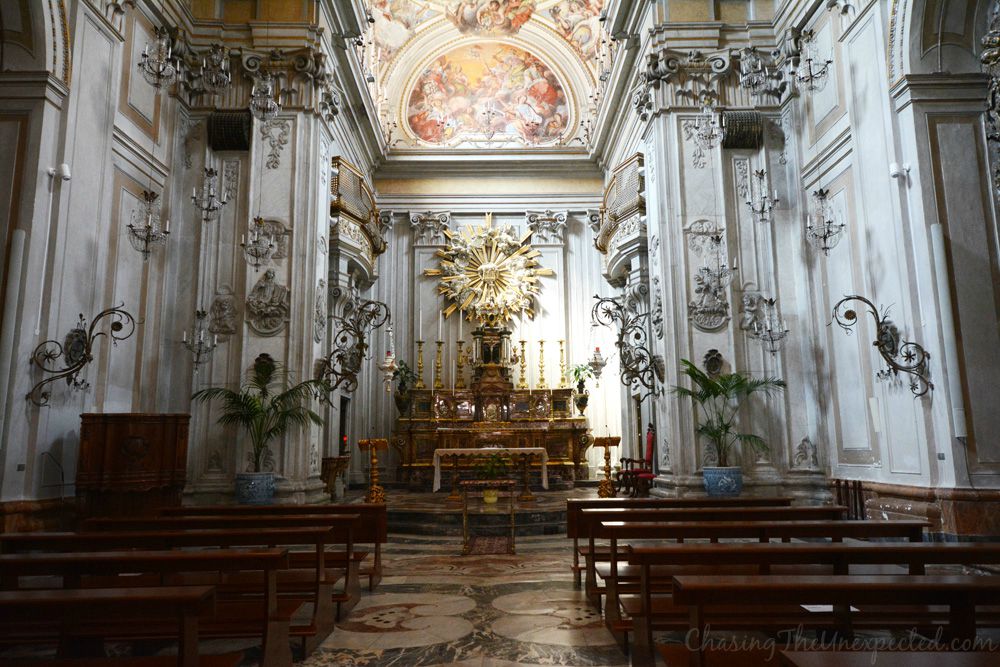 If there was one way to describe Catania, it wouldn’t be too far from sensory overloaded. Coming from Agrigento, I considered myself already well into the Sicilian mode to soon found out that our next stop was just in for new surprises and revelations.

Noisy, smelly and proudly displaying a seductive state of decay, Catania, even though dotted with spectacular churches, UNESCO-listed sites, and a famous coastline, never gave up on its village-like vibe, genuine and chivalric code included. It doesn’t matter how many tourists hit Catania all year long, especially in the summer season, locals are as enthusiastic as if every time they get asked for information it’s the very first.

Many are the things to do in Catania, one of the best destinations for a honeymoon in Italy. In all its charm, this Sicilian city has something for everyone, be it a nature lover, a history buff, or a foodie expert. The majestic and infamous Etna volcano looms over the city, ebullient from within and always ready to show off and offer some fireworks extravaganza for the joy of locals and visitors, making Catania one of the best places to visit in Sicily.

Fantastic things to do in Catania

See the elephant of Piazza Duomo

Apart from being Catania’s main square, Piazza Duomo is one of the most important late-Baroque piazzas. Its construction defined the new urban planning of the city after the terrible earthquake of 1693.

In the middle of the piazza you will see the iconic fountain of the elephant created in the 18th century by Sicilian architect Giambattista Vaccarini who also designed several buildings in the city. Considered the symbol of Catania, the statue is called “liotru” in Sicilian dialect and evokes old local legends and historical facts that shape the city’s culture.

Rising in the heart of the old town, Sant’Agata Cathedral, known as Catania’s Duomo, was built on the site of a 2nd-century thermal bath of which you can access the ruins from the church porch. The first layout of the current church was commissioned in 1094 by Ruggero I d’Altavilla from the French region of Normandy.

Known as the first Count of Sicily, Ruggero I had reached Italy through the ancient Via Francigena road and together with his brother Robert conquered Puglia and Calabria regions of southern Italy.

After taking Sicily away from the Arab rule, the Normans settled in Catania and gave a boost to Christianity and ordered the building of the cathedral. Eartquakes and historical successions of power define the structure and the look of Catania’s most important church.

In several places inside the church are kept the relics of Sant’Agata, a local martyr from Catania. Her skull is preserved inside the silver reliquary made by Siena’s artist Giovanni di Bartolo in the 14th century. Other body parts such as hands and feet are kept in separate anthropomorphic reliquaries.

Take a food walk or tour

Dominated by such a view, while wandering around Catania you are literally chased by the haunting smell of arancine, deep-fried rice balls stuffed with anything from ragù sauce, to pistachio nuts to spinach, fresh fish on sale in the local open markets and pizza by the slice on the go.

For some freshness during the summer heat, there is nothing better than the ever-tempting sight of local granite, smashed ice flavored with fruit juices, best if made with local produce of almond and mulberry. Really this is the only thing that can help you face the humid unforgiving heat defining the local summer.

Thankfully, it’s not hard to get them, as Sicilian pride conspires to make all the local delicacies easily available everywhere.

Some of the food tours you can take in Catania include a mouthwatering street food walk and an exciting food and wine tasting tour in the Etna Mount.

For as tempting as the food fragrances and sights are and as stunning as the churches’ architectural styles and decorations, what’s more alluring and utterly beguiling in Catania is its old crumbling buildings.

Belonging to different historical periods, the palaces show off the unfading exuberance of Sicilians reproduced through the lovely collaboration of loud patterns of Baroque churches and the more austere features of the Norman mansions.

A largely unfinished sacred building in Catania, the 17th-century complex of San Nicolò l’Arena includes both a Catholic church and the adjacent Benedectin monastery.

The original building was erected in 1578 when the Benedictine monks asked the Senate of Catania the permission to build inside the city’s walls due to the danger of the Etna’s eruption. Even though permission was granted, the first church was inevitably damaged by the volcano’s lava and following strong earthquake.

The church was fully renovated in the 18th century by a large team of the time’s most important architects such as Francesco Battaglia and Carmelo Battaglia Santangelo, who was in charge of the facade designed in a mix of Baroque and Neoclassic styles.

If you are staying more than one day in Catania and like sports activities, I definitely recommend you visit the Etna Mount, the world’s most active volcano. With a height of 3357 mt (more than 11,000 ft), Etna is one of Italy’s tallest mountains but its sceneries have nothing to do with the greenery and snow-capped peaks of Trentino Alto-Adige Dolomites or Valle d’Aosta Alps.

The views you will enjoy trekking the Mount Etna are moon-like landscapes alternated by fire-red lava and dark rocks. Between grottoes and ghost villages, you can spend a day or half a day visiting the Etna, possible to reach with either bus or train, or better by renting a car or booking a tour.

Apart from climbing the Etna volcano, there are several fantastic day trips to take from Catania. If you fancy visiting off-the-beaten-path Sicily, you can easily reach Caltagirone, part of Catania’s Metropolitan Area and a fascinating stop for its longstanding ceramics tradition and the wonderful views you can enjoy from its three hills.

Some other excursions you can take from Catania if you can afford a little more time in this beautiful area of Sicily include the wonderful Taormina (less than 50 km away), famous for its Greek-Roman ruins and beaches, Siracusa (some 65 km away), one of Sicily’s most beautiful cities, and the Baroque town of Acireale (15 km away) on the Ionic coast.

Why I loved Catania

What captured my attention, however, was not the imposing cathedrals or the historical manors, but instead the everyday beauty of those old palazzi that bear the most precious part of the city, that of ordinary people carrying on with their ordinary lives.

Like Agrigento, or maybe even more, the thick spirituality permeates the air everywhere you go in Catania, with churches, symbols, madonnas and passers-by who, almost absent-mindedly, make the sign of the Cross in front of their church or saint or protector of any sort. Adding to the devotion, a cloister and an unfinished cathedral complete the Sicilian otherworldly scene.

I stayed in Catania for only two days, enough to take in plenty of churches and wander around its city center dotted with sculptures, Roman ruins and mysterious sites such as a restaurant with an underground river flowing across its lower floor. It didn’t matter how long, or short, I managed to stay though, as every attraction was duly followed by one of the many delicacies the regional cuisine has to offer.

With so much left to see, I know I will be back in Catania.

Where to stay in Catania

Located in Via Etnea, UNA Hotel Palace is the perfect choice for the traveler who wants to enjoy the historic center, its Baroque architecture, and the great local restaurants.

Breakfast is served in the hotel’s restaurant and is not included in the price.
Click here for more details and current prices.

Located on the road between Catania and Acicastello, Grand Hotel Baia Verde is a luxury resort looking over a natural bay. A 4-star accommodation, this hotel features an outdoor swimming pool, a fitness center complimentary for the guests, and a wellness center with thalassotherapy treatments, hammam, whirlpool bathtub, and sensory shower.

This hotel is a great choice if yours is a beach holiday in Catania.
Click here for more details and current prices.

In a fantastic location in Via Etnea, Etna Suite Group is recommended if you want to explore Catania and its historic districts.

The spacious soundproof rooms are equipped with all the modern comforts and feature air-conditioning, writing desk, flat-screen TV, tea-making facilities, a minibar, and a comfortable private bathroom with hairdryer and free toiletries. Some rooms have a balcony, some a view of the garden, the Suite Deluxe features a hydro-massage bathtub, some rooms come with a living room.

A delicious daily breakfast is served in the hotel, with the possibility to request it served in the room.
Click here for more details and current prices.

Located some 200 meters from Piazza Duomo, Asmundo di Gisira offers free WiFi, a bar, a view of the city and a solarium terrace. This hotel is set in a historical building decorated with fine artwork and equipped with state-of-the-art amenities. The location is perfect for exploring the city center.

The rooms feature a flat-screen TV and private bathroom with slippers and complimentary courtesy kit. Some rooms have a balcony or a terrace, Superior rooms include a hydro-massage bathtub.
Click here for more details and current prices.