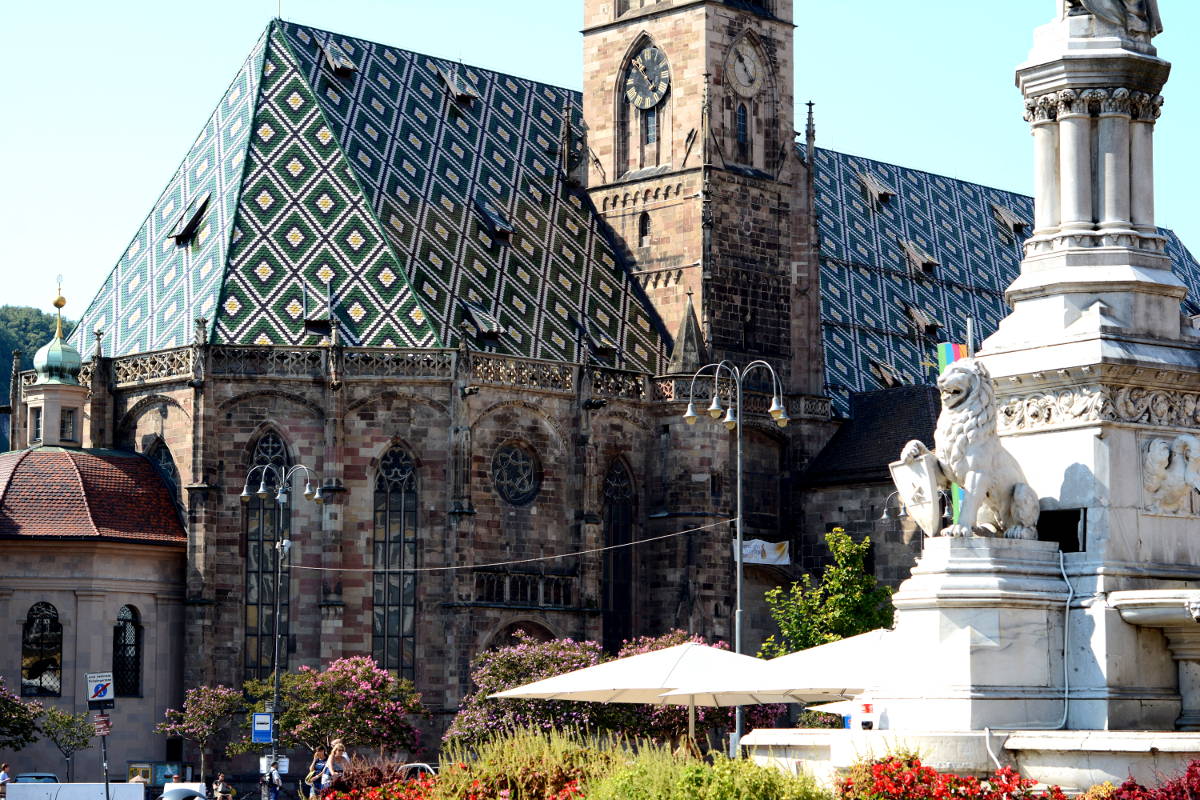 The cross-cultural reality of Italian and German traditions, Bolzano is a fascinating city that perfectly blends nature, history, and culture.

One of the cities to visit in Trentino Alto Adige, it makes for a great travel destination in both summer and winter.

From museums and historic sites to outdoor recreation opportunities, there’s something for everyone in Bolzano. Here are some of the best highlights worth checking out during your visit.

Top things to do in Bolzano

The first thing to do even if you are only one day in Bolzano is the Museo Archeologico dell’Alto Adige (Alto Adige Archaeology Museum). Home to 5300-year-old Ötzi since 1998, here you can see not only the Neolithic mummy but everything about him.

You will find its clothes, working tools and read bout his life, what he ate, his diseases, and everything researchers discovered about the Bronze age in the area after he was accidentally found covered with snow by some tourists.

Located near Piazza Walther, the majestic cathedral is definitely one of the places to visit in Bolzano if it’s your first trip. Devoted to the Holy Mary, its construction started in the 11th century and is now considered a precious example of Romanic and Gothic art.

The beautiful green-gold roof stands out from afar and is one of the features that make Bolzano Duomo famous and an original masterpiece. Its interior and exterior decoration is an interplay of art styles from different parts of Italy, such as the 15th-century fresco by Giotto’s school positioned below the tower.

It is impossible not to notice the wonderful bell tower decorated in filigree by Swabian stonecutter Hans von Schussenried in 1517.

Once you visited the Duomo, enter the Museo del Tesoro del Duomo, literally the “museum of the Duomo’s treasure”.

Located at the foot of the bell tower, it displays a fantastic collection of sacred kits and vestments from the Baroque period, as well as sacred jewelry from the 18th century. One of the things to see in Bolzano if you are an art lover.

Stroll around the historic centre

Take a walk around the streets and alleys of Bolzano city center. Admire its German-influenced architecture and relax in one of the cafes with a warm drink especially if you are enjoying the city and its Dolomites in winter.

Explore the medieval identity of Bolzano in the streets where you can see local markets, shops, ancient vaults, historic mansions, inns, and hotels like Luna Mondschein in Via Piave close to the historic Via Bottai.

Piazza Walther is known as the city’s “parlor”. The origins of this piazza date back to the early 19th century and changed several names depending on who was the king or leader at the time.

In 1901, the piazza was named after the medieval German poet Walther von der Vogelweide, but when the region became Italian, its name changed again in favor of the Savoy King Vittorio Emanuele III.

Only after WWII, it became Piazza Walther again and for good, and the statue of the poet stands tall in the middle.

All around the piazza are cafes and restaurants. This is the place of markets, festivals, if you are visiting in the winter festivities, don’t miss the Christmas Market set up here.

Walk under the covered galleries

Like many other northern Italian cities such as Turin, also Bolzano has its covered galleries (Portici). Via dei Portici is the first road of Bolzano, where the city was created by the order of a prince-bishop from Trento in the 12th century.

Some 300-metre-long, Via dei Portici was the pulsing heart of a city created for trading purposes. The road was closed between two doors and closed to the main door, where is Piazza delle Erbe, farmers used to sell fruits and veggies.

In medieval times, the buildings of Via dei Portici were both houses, shops, and stockrooms. Today, we can still see the original architecture from the Middle Ages.

Italian for “herbs’ square”, Piazza delle Erbe has been the place for the veggie market in the city since 1295. Still today, its fruits and veggies market takes place every day except Saturday afternoon, Sunday and holidays.

Discover the Dolomites near Bolzano

If you have more days and are still wondering what to do in Bolzano, why not take a trip around the city to immerse in nature and dramatic Alpine views?

Some of the places near Bolzano perfect for a day trip are San Genesio, a typical mountain village that you can reach by car or with 8 minutes of cableway from the city, and Colle, also easy to reach via cableway that will take you to 1134 meters of altitude.

Where to eat in Bolzano

All around the city centre is full of traditional restaurants. We had a lovely lunch at Vögele Wirtshaus (Via Goethe 3), an old tavern set in a 13th-century building and managed by the same Kamaun family since 1870.

Some other good local restaurants in Bolzano are Zur Kaiserkron (Via della Mostra 2a), Casa al Torchio (Via Museo 2a), and Cavallino Bianco (Via Bottai 6), Bolzano’s oldest tavern.

Where to stay in Bolzano

How to reach Bolzano

You can reach Bolzano easily by train with Trenitalia Frecciargento from Trento, Verona, Rome, Bologna and Florence. There are also bus lines that connect Bolzano to several Italian and international destinations. Check out here the trains and buses that reach Bolzano.

If you are coming by plane, you can land directly at Bolzano airport, which is a short ride from the city center. The other airports close to Bolzano are those in Verona, Bergamo, Milan, Venice, Innsbruck, Bologna, Treviso.

Those who are renting a car need to be careful because Bolzano city center is a ZTL, limited traffic zone, controlled with cameras. Follow the signs to the parking or stay away from the city center to avoid fines. Click here to see where you can park your car or RV without entering the ZTL.

How to get around Bolzano

Since the historic centre is a ZTL, your best bet to visit the place is either on foot or using public transport.

In Bolzano and the Alto Adige area, public transport is well organized and coordinated with urban and extra-urban buses, local and regional trains as well as different cableway services.

How many days do you need in Bolzano?

We spent only 1 day in Bolzano because it was only day trip for us but if you’re planning a visit to Bolzano, I would recommend you to consider at least two days to see everything this lovely city has to offer.

Located in the heart of the Dolomites, Bolzano is a mecca for outdoor enthusiasts, with hiking, climbing, and mountain biking on its doorstep.

In town, there are plenty of museums and galleries to explore, as well as charming cafes and restaurants. And don’t forget to take a cable car up the nearby mountain for stunning views of the landscape!

Ritten’s cable car for instance is great for vacationers. It only takes 12 minutes for the gondolas to move from Oberbozen/Soprabolzano to Bozen/Bolzano and they depart every 4 minutes. You can get a return ticket for €10 and enjoy the panoramic view while in Bolzano.

If you’re pressed for time and can only spare a couple of days, you can still see the best of Bolzano–after all, it is a compact city. Here’s how to make the most of your time in this beautiful corner of the Italian Alps.

Bolzano’s lively central square is also a great place to have apretivo and spend your evening listening to live music and do some people watching.

Yes. Bolzano is known as the city of roses, and with its mix of Gothic and Renaissance architecture, it’s easy to see why. The city is also surrounded by the stunning Dolomite Mountains, which make for a picturesque backdrop any time of year.

It is home to plenty of historical landmarks and lovely gardens. There’s something for everyone in Bolzano, whether you’re looking for an outdoor adventure or a relaxing day spent sightseeing. Plus, the locals are friendly and welcoming, making it easy to feel at home in this charming city.

What language is spoken in Bolzano?

Bolzano is located in the northernmost province of Italy, and as such, the main language spoken there is Italian. However, due to its proximity to Austria and German-speaking countries, many residents also speak German.

In fact, Bolzano was historically part of Austria until it was annexed by Italy in 1919. As a result, Austrian culture and architecture are still present in the city today.

If you’re planning a visit to Bolzano, it’s helpful to know some basics phrases in both Italian and German! But don’t worry if you don’t speak either of the languages because many people understand basic English.

What is the elevation of Bolzano Italy?

Bolzano Italy is a beautiful city set in a picturesque valley. The elevation of the city is 262 meters (860 feet) above sea level, making it the perfect gateway to the Dolomites mountain range in the Italian Alps.

In the medieval city center, visitors will find the South Tyrol Museum of Archaeology, which features the Neolithic mummy called Ötzi the Iceman.

Nearby is the imposing 13th-century Mareccio Castle, and the Duomo di Bolzano cathedral with its Romanesque and Gothic architecture. With its stunning scenery and rich history, Bolzano is a must-visit destination for anyone traveling to Italy.

You are done exploring the top things to do in Bolzano and still have some time in Trentino Alto Adige? Here are some nice and easy trips from Bolzano by train you can’t miss if you want to discover more of the region and northern Italy.

If you’ve decided to make Bolzano your base in Alto Adige, do make a day trip to Trento, the capital of the region.

From the Roman settlements to the medieval remains to a fascinating museum of science kids will love, Trento is rich in culture and has a vibrant society. Check out our guide to the top things to do in Trento for more info.

As soon as you arrive in Bressanone, you can’t avoid noticing the breathtaking mountain peaks surrounding the city and its German look.

Even though a small town, in Bressanone there are several places to visit, such as the beautiful cathedral and the palace residence of the prince-bishops.

Bressanone is half an hour train from Bolzano.

Famous for its thermal baths, horse races, and beautiful views, Merano boasts many reasons that make it a great day trip from Bolzano as well as an exclusive holiday destination both in summer and winter.

In one day in Merano don’t miss to walk around its “portici”, covered galleries, perfect if you want to go shopping. History and nature lovers will have a great time walking around the greenery of the Trauttmansdorff Gardens and seeing where the Austrian princess Sissi stayed.

Merano is some 45 minutes train from Bolzano.

With about an hour’s train from Bolzano, you can spend a day in Verona visiting its top landmarks such as the historic arena, San Zeno church, Piazza delle Erbe square, and the houses of Romeo and Juliet.

READ MORE: How to plan a perfect trip to Italy