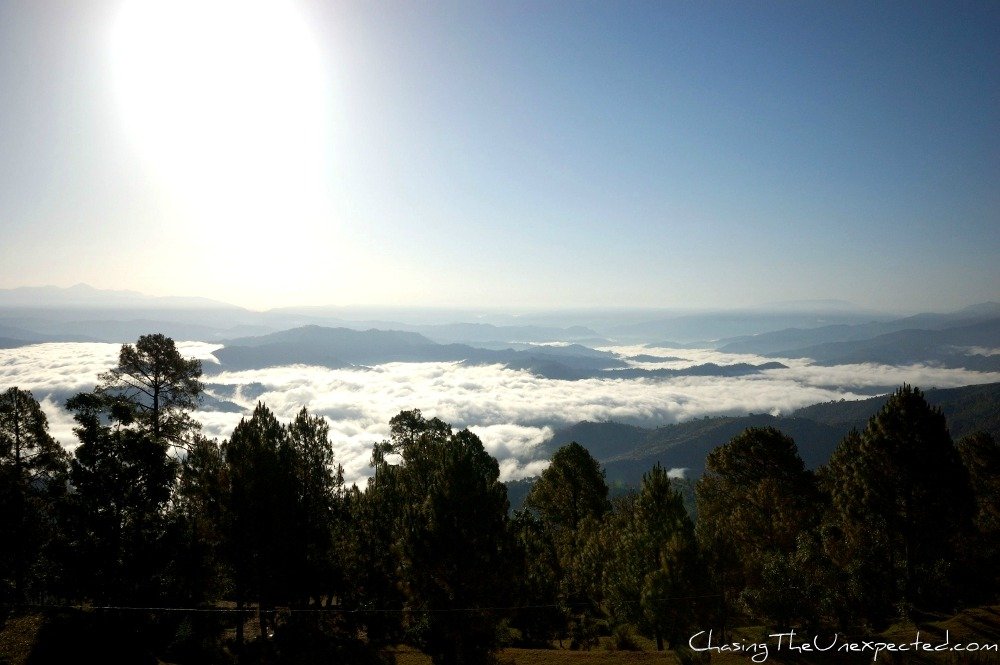 After visiting the state of Rajasthan, I looked for some less “touristy” destination and found it in a tiny village in the Kumaon region of the Uttarakhand in India, close to the Himalayas, confusedly named Manila, like Philippines’ capital city.

This small village in India’s Uttarakhand state, is a hidden gem that is worth exploring. This picturesque village is home to some of the most beautiful scenery in the country, and its inhabitants are warm and welcoming. If you’re looking for a peaceful and relaxing getaway, Manila is the perfect place to go.

We drove to Manila from Delhi, all in one go, leaving early morning and arriving late at night, not because it’s that far, but because it’s India, and especially in that area roads are not exactly highways. As a matter of fact, the further we drove up, the higher the cliff became, the more narrow the roads were (or at least appeared to me), and the closer we were passing along the edge.

I unconsciously grabbed the handle on the higher side of my door with both hands, and my driver asked me somehow astonished: “Are you scared?!” “Who, me?!” came my prompt reply, “of course not!” Thank God, the night came, so at least I was not able to look out of my window. It’s all part of the adventure, right? I have to say that my friend’s tales around the temples built in remembrance of the vehicles crashed down the cliffs, didn’t help.

Despite being very late at night, my friend announced that the morning after we were supposed to get up early in order to see the sunrise: “Tomorrow I’ll show you the paradise” he promised. The day after, I woke up on time for the sunrise, he didn’t. Ok, after some 10 hours of uninterrupted drive the day before, he was excused.

So on my first day in Manila, I witnessed the paradise by myself, and that made it no less dreamy. Overlooking a blanket of soft, white, immaculate clouds with the Himalayas peeping from time to time out of the morning maze almost as if to say “You found me, so what?”, did look otherworldly.

When, hours later, my driver “hastily” looked for me worried for having missed the sunrise, he was very pleased to see I hadn’t, and thoroughly enjoyed how I had captured “his paradise”.

As soon as we walked across Manila, I didn’t see anything around, and the days after went on pretty much the same way. It seemed like the village was “hiding” from me. On the main road there is a stand that sells sort of everything, from water to Sim cards, but especially, it works as the foreigners’ introduction to what locals call “the market”, or “bazaar”.

To find this so-called market visitors will have to look beyond the main road, or better, down the small cliff, where a narrow path clothed with not-so-friendly rolling stones leads you to a couple of shops undercover, that to me looked completely empty, but apparently they were not, since my friend would come out with literally everything from there. In every trip, there are aspects of a place we don’t manage to grasp immediately, for me one of those is Manila’s market, shrouded in mystery.

So, I wanted to go local, didn’t I? Well, in Manila I found my cup of tea. No showering with hot water, I know summer was imminent and temperatures were already pretty high, but shower-wise I’m a little spoiled. Not to mention the evening, while staring at the suggestive lighting from the other tiny villages at the feet of the Himalayas, suddenly everything would go black: “Oops,” my friend would smirk, “electricity’s gone!” I challenge you to find something more “local” than this.

All around Manila lies a huge jungle that covers a big part of the whole region. Undisputed stars of this jungle are the tigers that, although dangerous, scary and strong, act very precious and rarely appear to human sight. Needless to say, every time we drove along the jungle I had my camera and all possible lenses ready for the “king”, but apparently his majesty didn’t feel like being framed.

One early morning, while walking around the jungle with my zoom lens ready in the hope to see the tiger (from far) and take her picture (from far, hence the zoom lens!), out of curiosity, since my friend is native from this region, I asked him: “Have you ever seen a tiger?” His reply was so swift and  enthusiastic that I suspect he was just waiting for my question: “Of course!” he announced acquiring some kind of blessed look, “one day I was walking with my friends, the tiger suddenly came, grabbed our dog and ran away!” My legs failing, with as much self-dignity as I could muster, I muttered: “Awesome! Maybe I’m not that curious to see the tiger anymore!”

Obviously, we managed to go back to our guest-house unscathed, and despite our repeated efforts, there has been no epiphany, but instead, we saw plenty of:

I guess the tiger is next time’s prerogative. In the meantime, I suggest you to read some of the articles I have written on the mistakes I have made and how you should avoid them. From how to avoid getting sick in India to things not to do while in India, there is something useful for everyone in the mentioned articles.

Manila is situated at an altitude of 1,475 metres (4,846 ft) and is surrounded by hills. The scenery is stunning and the air is fresh and clean. It is a great place to visit for a relaxing holiday. Here are my tips on how to make the most of your visit.

Firstly, Manila is best visited during the summer months of February to April when the weather is warm and sunny. However, even in winter the temperatures are mild and the scenery is still beautiful.

Secondly, there are plenty of things to see and do in Manila. You can go hiking in the surrounding hills, visit the temples and museums, or simply relax in one of the many parks and gardens.

Thirdly, Manila has a number of hotels and guesthouses to suit all budgets. There are also several restaurants serving both local and international cuisine. Lastly, don’t forget to buy some souvenirs from the many shops in Manila before you leave!

45 thoughts on “Visiting Manila – a hidden gem in Uttarakhand state”