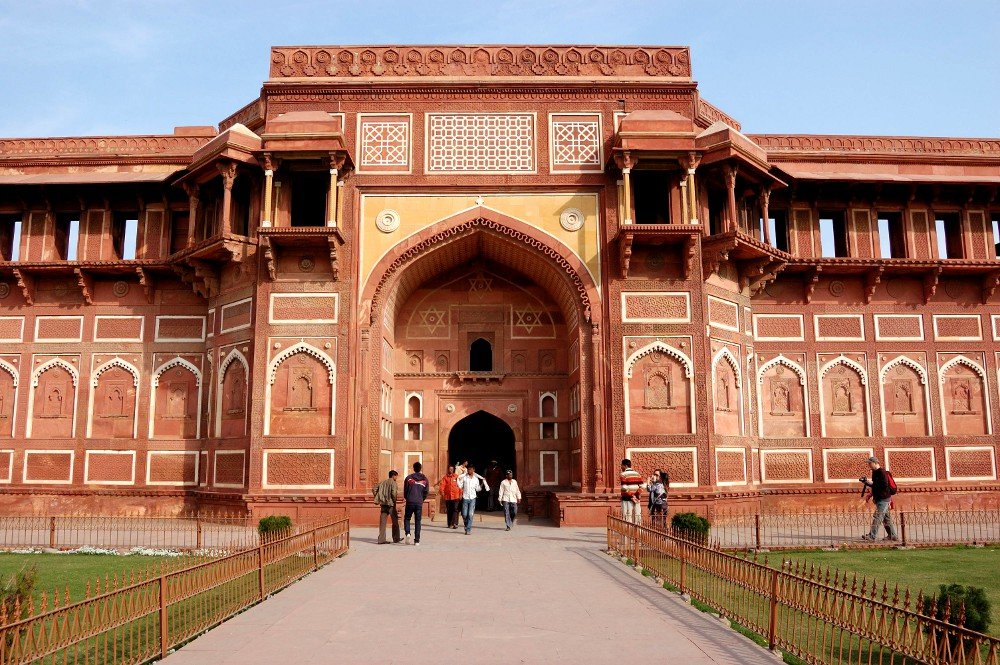 The first day of my trip to India was spent in Agra, and the very first monument I’ve visited in the muslim-populated city was the huge Fort, the country’s most important fortress.

Most Mughal kings have lived there, and from here they also used to rule the country. This fort was started during the era of emperor Akbar the Great and is an impressive collaboration of palaces added by the following generations of kings, such as Jahangir, Shah Jahan and Aurangzeb, covering taste, mood, personality of every emperor who commissioned each piece.

The building is massive, very likely it was built in place of the old Badalgarh Fort, stronghold of Rajput rulers. Surrounded by a double wall, of which the outer one is 40 ft high and the inner one 70 ft, the fort was started in 1565 and completed in eight years, matching the different tastes of each of the Mughal kings that contributed in its creation.

I loved ambling along the alleys and the many palaces inside the Fort, while my guide Danish slowly unfolded the tales and legends behind every wall of the fort.

One of the greatest buildings is the red-sand-stone Jahangir’s Palace, built by Akbar the Great. History here is a little confused, the palace is believed to have been built by the king for his son, then later emperor Jahangir built another palace after demolishing one of the areas that Akbar had devoted to his Hindu wife Jodha Bai.

Stories of rivalry, love, passion, diversity are all entangled and brought to our times through the many styles present in this fort.

Wandering from one palace to the other, I passed by the gardens inside the fort. When I entered Anguri Bagh, or the Grape Garden, I was completely alone, not even my guide had already reached the spot as he was buying my ticket. Only one of the gardeners was having rest sitting in a corner of his green creation, certainly enjoying one of the rare moments of peace.

I shared that feeling of tranquility and loved contemplating the perfectly trimmed greenery. Unfortunately that was just that, a fleeting moment before a horde of yelling tourists came and broke the spell. No move, nor reaction came from the gardener, very likely used to such sudden change of atmosphere.

As I kept crossing the different palaces, listening to the pearls of knowledge Danish was giving me, I felt I could actually see the emperors, their wives, busy (or not-so-busy) in their daily routine, and the myriads of workers sweating under the pitiless Indian sun while building or readjusting the different parts of the mansion according to the rulers’ ever-changing demands.

The last block I visited in the Fort was Samman Burj (or Musamman Burj) where Mughal emperor Shah Jahan was confined by his son, just opposite the Taj Mahal, magnificent building he himself had commissioned in honor of his beloved wife, Mumtaz Mahal, who died after giving birth to their fourteenth child.

The death of his wife, brought to his mind every single day by the view of the Taj, literally drove him crazy.  He slowly dragged himself to death, after torturing his last years with the view that reminded him of the most tragic moment of his life. That was my first encounter with the Taj Mahal, a masterpiece built out of grief and love.

What is Agra Fort famous for

The fort in Agra was built by Mughal Emperor Akbar in the 16th century. It is a UNESCO World Heritage Site in the city of Agra in India. It was the main residence of the emperors of the Mughal Dynasty till 1638, when the capital was shifted from Agra to Delhi. It is about 2.5 km northwest of its more famous sister monument, the Taj Mahal.

The fort can be accurately described as a walled city. It has consisted of a number of buildings surrounded by Defensive Walls with numerous gates and towers. Initially it started off as a brick Fort known as Badalgarh, built by Sikandar Lodhi in the 16th century.

After Akbar it was extensively modified and improved by his successors Jahangir and Shah Jahan and achieved its present grandeur during their reigns. Shah Jahan particularly added some very beautiful palaces and other buildings inside, though not on the same scale or in the same style as at his new capital, Shahjahanabad (Old Delhi).

Even today one can see outstanding architectural marvels inside like Jehangir’s Quadrangle, Sheesh Mahal (‘Palace of Mirrors’), Hammam (Royal Baths) etc., which testify to their artistry.

What is the difference between Agra Fort and Red Fort?

Agra Fort and Delhi’s Red Fort are both imposing examples of Mughal architecture. However, there are some notable differences between the two. For one, Agra Fort is much smaller than Red Fort, measuring 2.5 times smaller in terms of total area. This is reflected in the layout of the two forts, as Agra Fort does not have the same expansive gardens and lawns as Red Fort.

Additionally, the architecture of the two forts is similar but not identical. Agra Fort is constructed primarily of red sandstone, while parts of the Red Fort like Moti Masjid is built from a white marble.

Finally, while both forts were once home to the Mughal rulers, Agra Fort fell into disuse after the capital was moved to Delhi in 1638, while Red Fort continued to be used as a residence by the Mughal emperors until 1857.

Today, both forts are popular tourist destinations, offering visitors a glimpse into the opulent world of the Mughal aristocracy.

The best time of the year to visit the Agra Fort

The best time of year to visit the Agra Fort would be in winter from December to March. Here is what you need to keep in mind when deciding when to visit Agra Fort: In most part of India, Spring is shorter than 1 month and the winter is fresh (not cold).

The weather in Agra is extremely hot during the summer months (April-July), with temperatures often reaching over 40 degrees Celsius (104 degrees Fahrenheit). If you don’t enjoy sweating profusely and being uncomfortable in extreme heat, then you should avoid visiting during this time of year.

The monsoon season runs from late July through September, and while rainfall can cool off the temperatures a bit, it also makes conditions quite wet and humid. I spent a whole month of monsoon there and it wasn’t pleasant for me.

How much is the entry ticket to Agra Fort

The ticket entry to Agra Fort is Rs. 40 for Indians and Rs. 550 for foreigners, it’s free for children below age 15. The fort is open from sunrise to sunset (6AM to 6PM), and it’s recommended that you visit early in the day to beat the crowds and heat.

There is also light and sound show often after the sunset that you can buy its tickets separately if you are interested. The Agra Fort Entry Tickets Prices for Light and Sound Show is Rs. 70 for Indians and Rs. 200 for foreign tourists. Free for children below 15. You can buy the ticket online and directly from the entrance.

What to pack and wear to visit the Agra Fort

32 thoughts on “In Agra, ambling about the Fort”