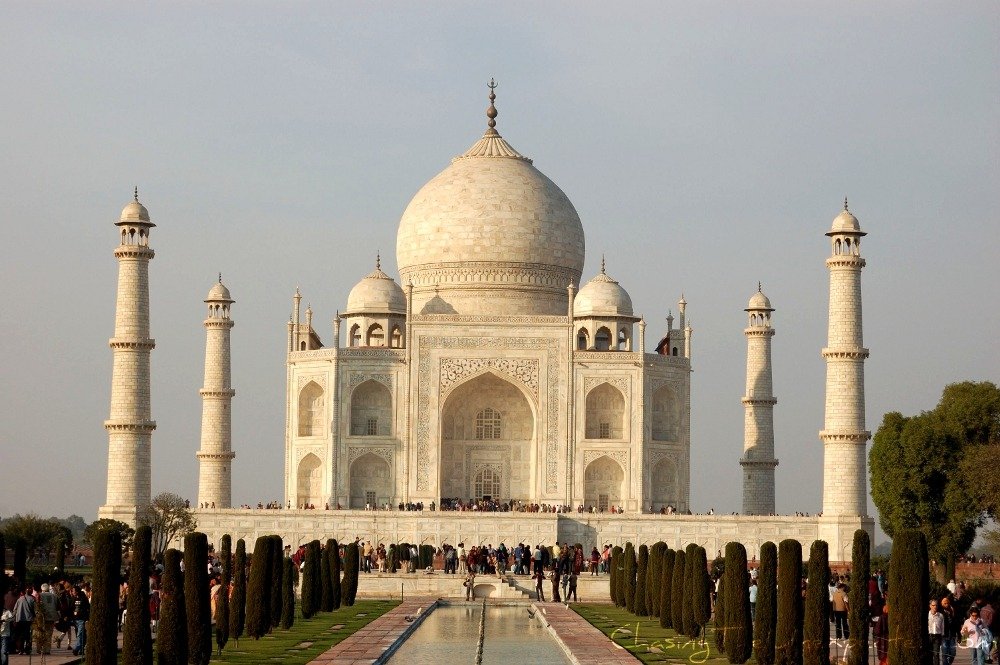 My first fleeting experience with the Taj Mahal in the city of Agra took place at the Red Fort when, visiting Summan Burj, my guide Danish explained to me that right there the king Shah Jahan spent his last years torturing himself with the sight of the awe-inspiring tomb he had built in loving memory of his beloved queen, Mumtaz Mahal.

Visiting the Taj Mahal, the ultimate monument to love

“Are you ready for the ultimate monument to love?” Announced my guide when we were leaving the Red Fort.

We got in the car and made our way to UNESCO world heritage site Taj Mahal. “Take a picture of the Taj when you go,” an Indian friend of mine living in Shanghai told me. “Even if I’m from India I’ve never seen it!”

The first impression a visitor has when motioning beyond the curved vault into the otherworldly garden is one of peace. It doesn’t matter how many tourists visit the monument, you will always be able to hear the silence. It was built as a tomb, a place to rest, and this is how it stayed throughout the centuries.

It seems like we don’t have much information on the Taj Mahal city, Agra, before the Muslim conquest.

What we have is the impression of Persian poet Salman, who died in 1121 AD, left to posterity his memory of a glorious Hindu stronghold.

As history goes, we know that in the seventeenth century, when it was ruled by Shah Jahan, grandson of Akbar the Great, the city reached its highest moment of architectural style, which culminated, needless to say, with the Taj Mahal.

Since the day of their marriage, Shah Jahan and Mumtaz Mahal became inseparable, to the extent that when her husband went to Burhanpur in the Deccan to suppress a revolt of Khan-e-Jahan Lodi, Mumtaz went with him, and after giving birth to their fourteenth child, she fell very ill.

Apparently, her last wish was that her husband would build a beautiful monument on her grave as the symbol of their never-ending love. This is how the Taj Mahal was created.

⇒ For a truly pampering experience in India, check out The Deccan Odyssey luxury train.

So Shah Jahan did, commissioning the Taj Mahal, a real masterpiece in marble of Makrana, in the Nagaur District of Rajasthan, to architect Ustad Isa Afandi of Turkey.

It took twenty years and some 20,000 workers to build the Taj Mahal, today one of the landmarks that hardly miss in any India itinerary.

Created by the genius and expertise of countless artists, workers, poets, the Taj shows its majesty even before arriving, but once there it’s truly striking to realize that nothing is visible behind it: no other city, no building, no land, only a boundless sky.

Around the Taj Mahal, there are other minor buildings, also beautifully inlaid with an exquisite taste of colours and decorations, serving as tombs as well, some for the maids of Mumtaz Mahal, some for the other wives of Shah Jahan.

Apart from visiting the Taj Mahal, with the opportunity of taking pictures from the outside (inside it’s not allowed, even if some visitors don’t really respect the rule), you will enjoy watching the many Indian couples, with respective families behind, posing for romantic photos, almost as a way to celebrate their marriage in the place that in their country is widely considered as the “ultimate monument to love.”

34 thoughts on “Taj Mahal, the ultimate monument to love”