On the Great Wall of China, not the best place for misunderstandings

I book tour guides very rarely, I do it only when I feel going by myself could make me waste time or not properly appreciate what I’m meant to visit. These are the main reasons why I booked a guided tour to go to the Great Wall in Beijing, China, in August. 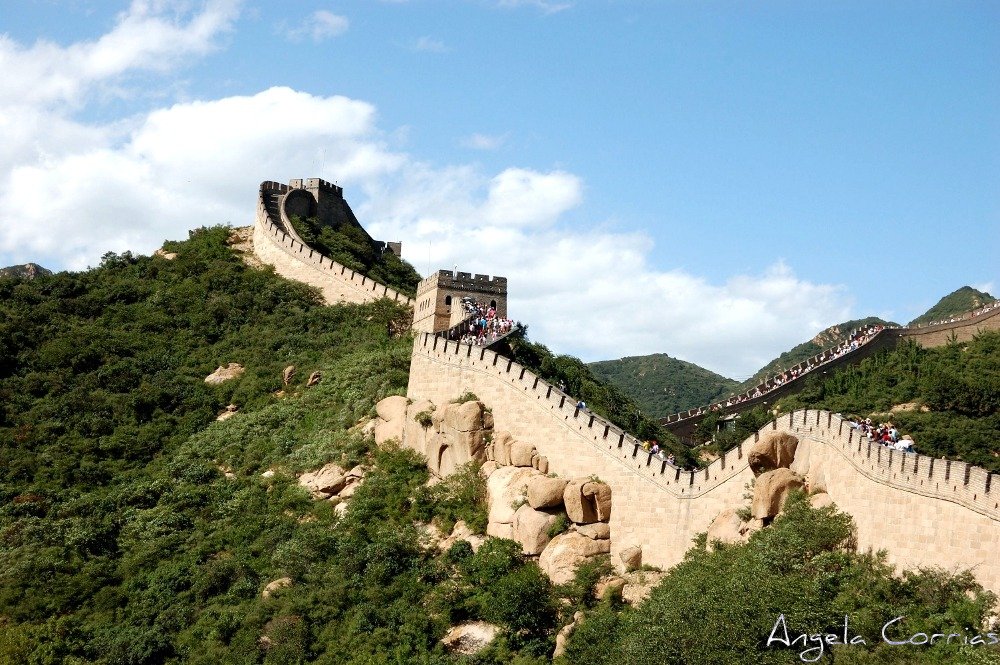 A view of the Great Wall from the entrance in Beijing.

It’s fair to say that at the time I had been in China for about two weeks and I hadn’t started my Chinese classes so I didn’t speak a word of Mandarin language, which made all communication impossible since locals spoke no English. After the Ming Tombs, all due “shopping stops” and the lunch, in the afternoon we finally made it to the longed spot, what we all had been waiting for.

The UNESCO-listed Great Wall of China is arguably one of China’s most visited landmarks. An ancient fortification built to protect China from foreign invasions, it’s more than 20,000 km long, as announced by the State Administration of Cultural Heritage after a survey. Started in the 8th century BC and built throughout the following centuries, today it’s a favourite trip from Beijing for families with kids. 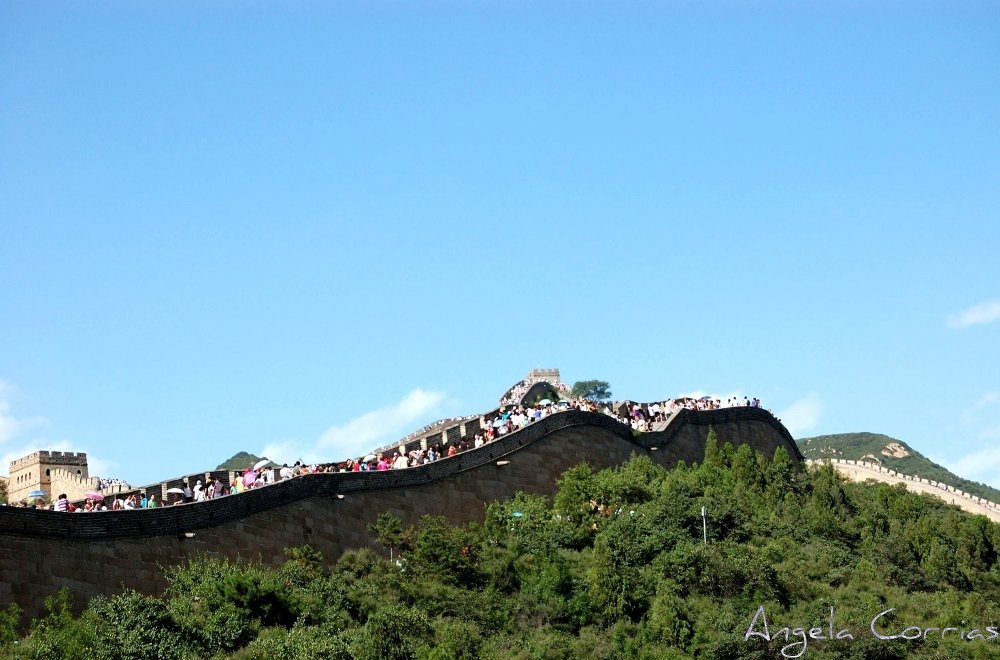 In August the Great Wall is packed with tourists.

Although everybody knew that the fact that the Great Wall is visible from the moon is a myth, we were nevertheless looking forward to walking on one of the most awe-inspiring world’s wonders.

Our guide warned us from the bus: “Today is one of the worst days to visit the Great Wall, it’s not just during summer holidays, it’s also the weekend!” We got what she meant as soon as we arrived: a huge human flow was spread-out all along the Wall, from the entrance to the top. Most of them were Chinese, and this is where I had the full idea of being in the most populous country on earth. I felt like the whole population was there on the same day as me. 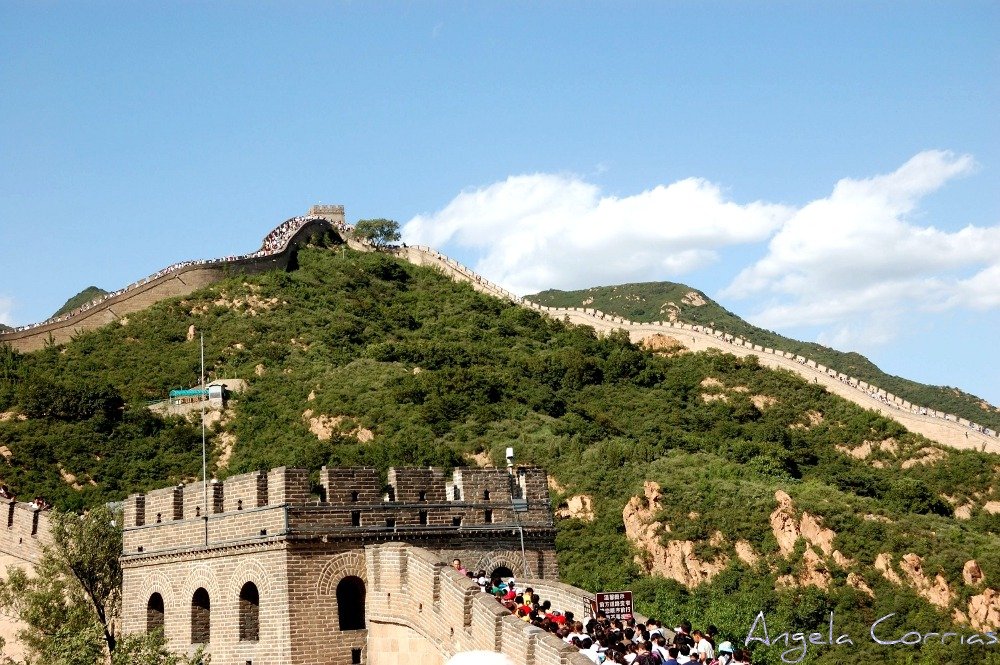 In her shaky English, our guide, who didn’t come with us all the way up to the Wall, instructed us to go back through the same path we used to go up. That made sense when we started our march, but once at the top didn’t really seem to be so straightforward.

We got swept by the continuous flow of people, both on our way up and when we were starting our descent towards the modern world. We tried to go down the same route we used to come up, religiously following our guide’s instructions, but it was physically impossible as the enormous crowd of civil pilgrims wouldn’t allow us to go against the flow.

As we didn’t see anybody defying (nor trying to, for that matter) such a powerful human flood, we follow the trend and went down the very parallel route. “What’s the harm?” I thought. “We are still here!” 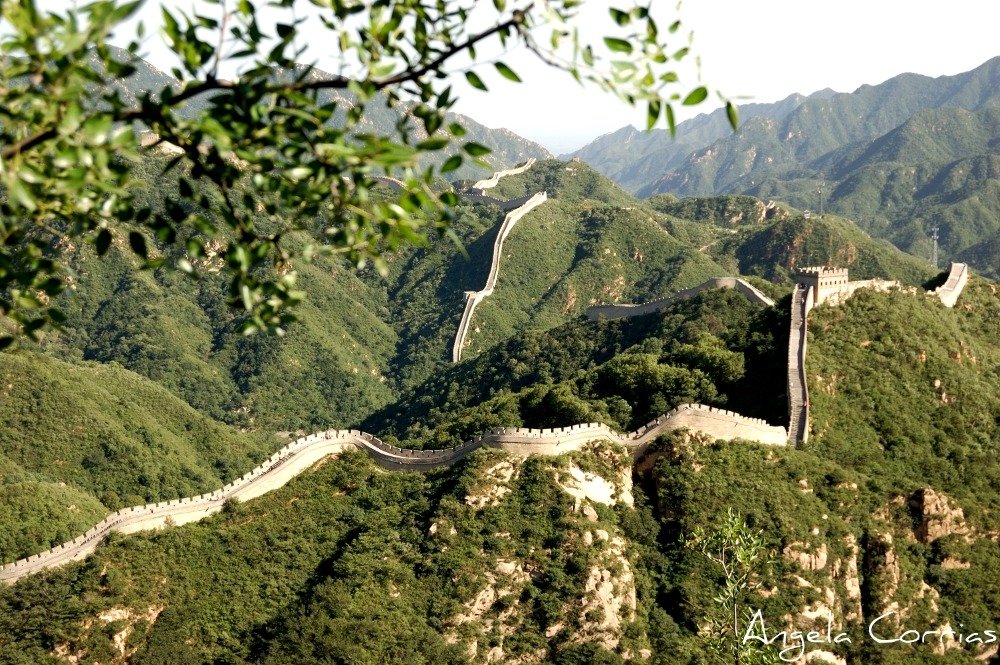 The famous last words. In less than no time, and in a way that still remains a mystery to me, we ended up in an unknown land. Nothing was like we remembered, the way down proved to be harder than its corresponding uphill climb, instead of a paved way, we found a path bristled with pitfalls and little rolling stones, the big door at the exit was different from when we entered (it was supposed to be the same), the little souvenir shops were not there anymore, and more importantly, our bus was not there.

We tried to ask the other tourists, who amazingly happened to be all Chinese, and whenever they caught the word “exit” they all pointed us the same direction.

As every other thing, also the parking looked different, much less crowded, different shops, not familiar at all.

I was with my parents and we soon realized we were lost. We didn’t speak a word of Chinese, nobody spoke a word of English, we had never felt so unable to communicate and to ask for help like that day. And if this wasn’t enough, the blazing heat didn’t help us see straight.

We called our guide and when we described what we were seeing, she unveiled the truth: “Oh my, you are in Mongolia!” “What?!” We echoed.

Wasn’t Mongolia another country? When did we cross the border? How did we end up out of China? 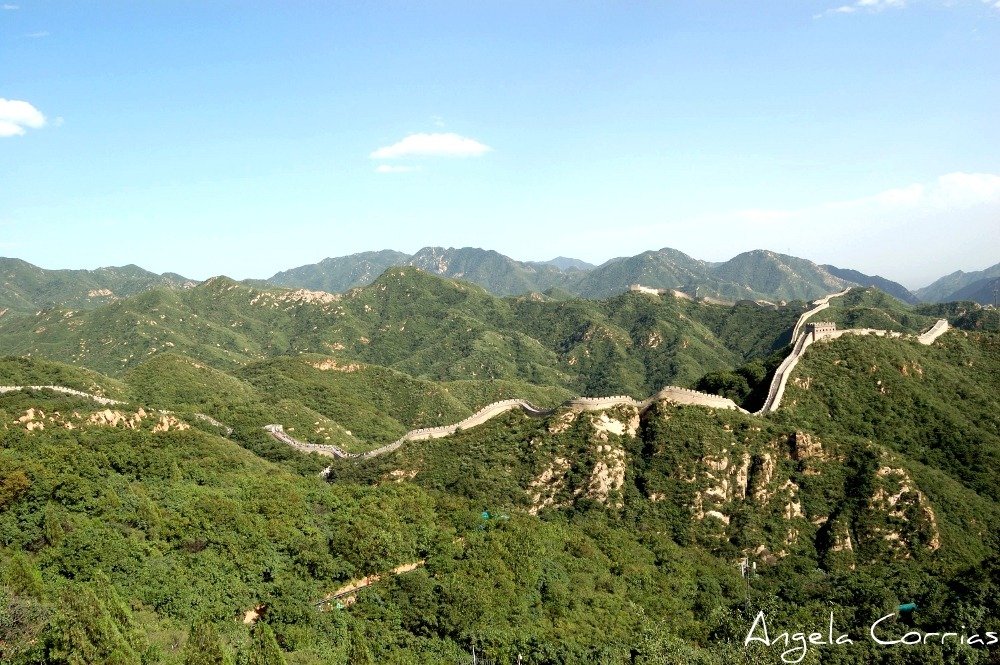 In China, Facebook and other websites are subject to government filter. This is why it’s good to have a VPN service to be able to access all websites by connecting to foreign servers. I have always used ExpressVPN because it’s the most reliable among the ones I have tried, both paid and free ones. With ExpressVPN you will have a fast connection, a big choice of servers and with the same subscription, you can install it on more than one device. You can do a monthly or annual subscription, obviously the annual is cheaper: last time I bought it was one month at the cost of $12.95, while the annual package costs $8.32 per month.

To our (little) relief, we had not crossed any border, we ended up in Inner Mongolia, still a part of China, precisely the former country whose nomadic tribes used to invade China and to stop which the Han Chinese built the Great Wall.

However, this didn’t make things easy for us. We gave our phone to a taxi driver so he could talk to our guide and understand where to take us, but we soon found out that not all cabs could drive to the other side of the wall, so we had to find one with the right license.

When we finally found the way, we were worn-out, and although we suspected that this was going to be our favorite joke to tell family and friends back home, at the time we had no energy left even for a little chuckle.

If it wasn’t evident before, after our adventure, it became crystal clear how important was for me to learn Chinese if I had the intention to stay in China.

After six months, I’m by no means fluent, but I can communicate, I can manage to find the words to ensure a smooth survival, and last but not no least, I can find my way home if I get lost.

Shopping in Shanghai, or the art of bargaining

Tower Bridge in London, plan a perfect visit to one of the city's most iconic landmarks

Discover our handy and complete itinerary for 2 days in Milan with the best things to see and do, ...

Best Things To Do In Bolzano, Northern Italy

A Handy Bolzano Travel Guide Home > Italy > Best Things To Do In Bolzano by Angela Corrias • ...

Top 10 Trekking Places in Nepal for an Epic Adventure

Find the best trekking places in Nepal for an epic adventure. Discover the Mount Everest between ...