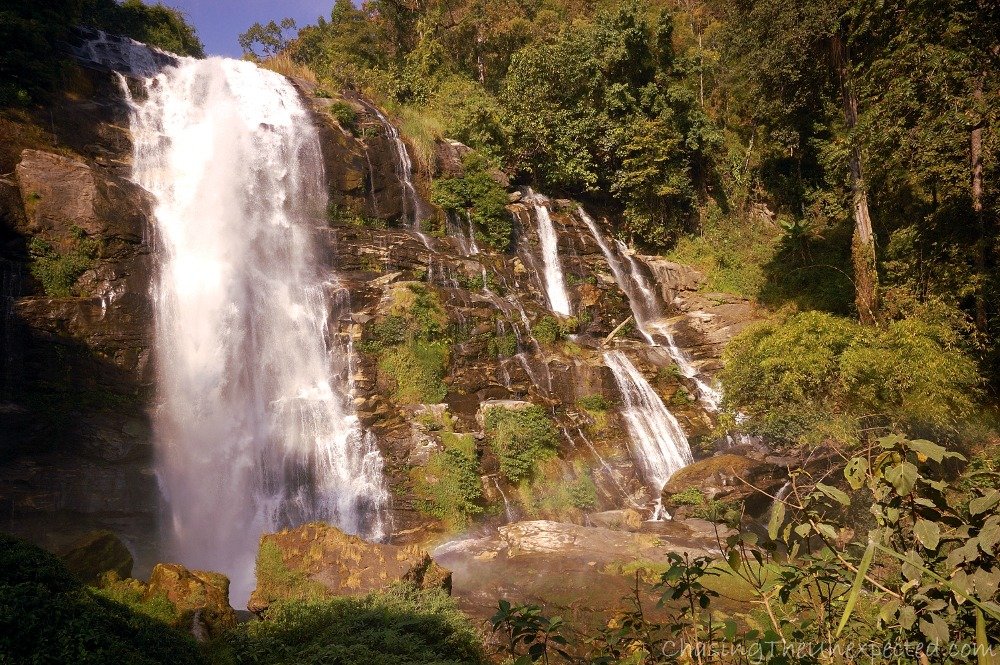 For my last day in Chiang Mai I booked myself for a day trip with a government-run agency, and for less than 40€ (50USD) I had hotel pick-up, A/C-equipped bus transport, insurance, tour guide, admission fee for Doi Inthanon National Park (200 Baht) and lunch included.

Considered one of the main Chiang Mai attractions, Doi Inthanon National Park tour is a must.

With about half an hour of delay, our smiling guide beckoned us to get on the bus. I rarely take organized tours, but sometimes I do, and I admit, I enjoy them. First of all, I enjoy the fact that for once I’m not the one in charge of everything, and usually, traveling alone as I do, I’m always the one in charge of everything. Second, local tour guides have obviously that intimate knowledge of the place that I can never reach in two weeks, or even a month. Third, and last, but not least, I enjoy observing the other tourists traveling with me for one day, the huge array of humanity that this can be and how they behave when they are out of their comfort zone.

During this memorable day trip, my friend and I were sharing bus, adventures, and misadventures with a quiet Israeli couple (she might have probably been a doctor, he was for sure an army veteran, he had a muscle mass he could easily knock me down with his little finger), two little Thai girls and a huge, 8-member, loud’n’proud Moroccan family, whose components pleased us during the whole journey with an extravaganza of “Yallah!” “Khalas!” “La La La La La!” (meaning “No”, not singing).

I could see since the beginning that the Moroccans were watching me rather suspiciously, wondering whether my Arab-look would justify talking to me in Arabic (like every single Arab does when they meet me) or if that would look rather over-confident of them. The big mama of the situation didn’t take her eyes off me during the whole lunch.

So our diverse and quirky group was ready to set off, enthusiastically longing for being photographed at Thailand’s highest peak at Doi Inthanon National Park.

The first stop was (supposed to be) a 30-minute visit to Doi Inthanon National Park’s Wachiratharn Waterfall, a cheerful gushing of freezing water coming out of a little mount. Past the allocated half an hour, we were all on the bus, except the Moroccan leg of the group. Like a proper family-oriented Arab family, they were traveling with their grandmother, a loud old lady who had problems walking.

As it happens, when we stopped, or better, moments before our 30 minutes expired, she realized she had to go to the toilet, which was not-so-conveniently located down some slippery stone stairs. Another 40 minutes went past, for our guide’s immense dismay because “we won’t manage to be at the Pagodas in time and we’ll have to skip them!”

As it turned out, there had been a misunderstanding, maybe due to the fact that both Thai and Moroccan sides couldn’t find a common language and communication got somehow lost in translation. The Moroccan man had booked a mini-van privately, only for his family, which made sense, since they occupied more than half of our bus, so they could indulge and take their time knowing that the grandma needed special attention. We all nodded understandingly, which was probably what allowed a more relaxed continuation of the journey, with mutual jokes and the Moroccan guy asking me, in English, if I wanted my picture taken somewhere, that he would do it for me.

TIP: To visit Doi Inthanon National Park from Chiang Mai, check out this full-day group tour that will also take you to the villages of the Karen people. You will have a hotel pick-up and drop-off, you will travel in an air-conditioned van and bottled water is provided. Lunch and admission fees are included.

After everybody was ready on the bus, we were off to a Karen hill tribe village, where a small delegation of the Karen ethnic group lives and works, the women weaving their beautiful, colorful scarves and the men doing some construction work in their wooden huts. The Karen people are an ethnic group living in South East Asia, about 7 million in Myanmar (Burma), half a million in Thailand and smaller groups in India and other Asian countries. They practice their own religion, animist, and they carry on with their own very particular social habits, almost careless of the changes around them.

After visiting and greeting the Karen people, we stopped for lunch. The Moroccan head of the household solemnly requested: “I want a table for MY family!” They were given one, and the rest of the group silently grabbed the one behind them. The Israeli man, with his efforts to look open at the culture he was visiting, asked the Thai girls: “Here is a soup! Please, show us how you eat soups in Thailand!” The girls, who had already started eating, stopped for a fraction of a second, listlessly raised their head from the spoon, looked at him as if wondering if he was mocking them, and with the same blank look they buried their head again in their bowl of rice and kept eating. A chuckle was about to leak out, but I managed to suffocate it with a spoon of the same rice.

Once finished our lovely lunch, tasty as just about everything in Thai cuisine, and once our tour guide found the child of the Moroccan family who meanwhile had got lost, we went to Doi Inthanon National Park Summit, the country’s highest peak, and enjoyed a well-deserved break from the national blazing heat, walking through the wooden passageway across the wild, lush forest of evergreen trees, tropical plants and refreshing rivulets.

Part of the Doi Inthanon National Park tour is also the King’s and Queen’s Pagodas.

Holy towers recently built in honor of the royal family, whose portraits are ever-present all around the country, they stand one in front of the another. The King’s and the Queen’s pagodas dominate the view of a clean and tidy “Western Garden”, filled with foreign flowers and plants, which, albeit beautiful, are not exactly a good match with the surrounding Thai vegetation, already stunning on its own and without any need of complementary foreign flora.

This was our last stop before heading back to Chiang Mai, tired but satisfied that at least we had a big Moroccan family to add some colorful notes and excitement to our trip.

My friend and I asked the guide to drop us at the city center rather than at the hotel straight away, so we could enjoy the last hours in this lovely Northern Thai town.

And this is how, in our last evening walk, wandering the city’s backstreets, we were pleased to find quirky little handicraft shops and Beetroot Stories, a vegetarian cafe serving delicious smoothies and sandwiches. Because Chiangmai is also this, just sitting and relaxing!

Where to stay, best hotels in Chiang Mai

Mid-range. Good options for mid-range hotels in Chiang Mai include Mini Boutique House with spacious and nice rooms featuring a kettle, private bathroom, a desk, flat-screen TV, and located close to the main landmarks, At Phra Sing Retro, located in Chiang Mai city center and offering simple rooms equipped with the necessary facilities, helpful staff, and on-site dining options, and Jomkitti Boutique Hotel, a little more expensive but worth the price. This boutique hotel in Chiang Mai city center offers free WiFi and bikes, a fitness center, a small swimming pool, and rooms with a desk, private bathroom, air conditioning, TV, kettle, some rooms with a balcony and a minibar.

Cheap stays. Among the cheap hotels in Chiang Mai, some of the best are Bruuns Guesthouse, conveniently located near important landmarks such as Wat Chiang Man and featuring simple rooms with air conditioning and flat-screen TV, Wayside Guesthouse, another guesthouse with all the necessary facilities and free WiFi for a really cheap price, and Green Sleep Hostel, a cheap hostel in Chiang Mai city center that features free WiFi, air-conditioned rooms, and free bikes.

Finding the spiritual me in Chiang Mai with Buddhist monks

Monks’ Market among the best things to do in Chiang Mai

5 thoughts on “Doi Inthanon National Park, the day trip from Chiang Mai anyone would want to experience”