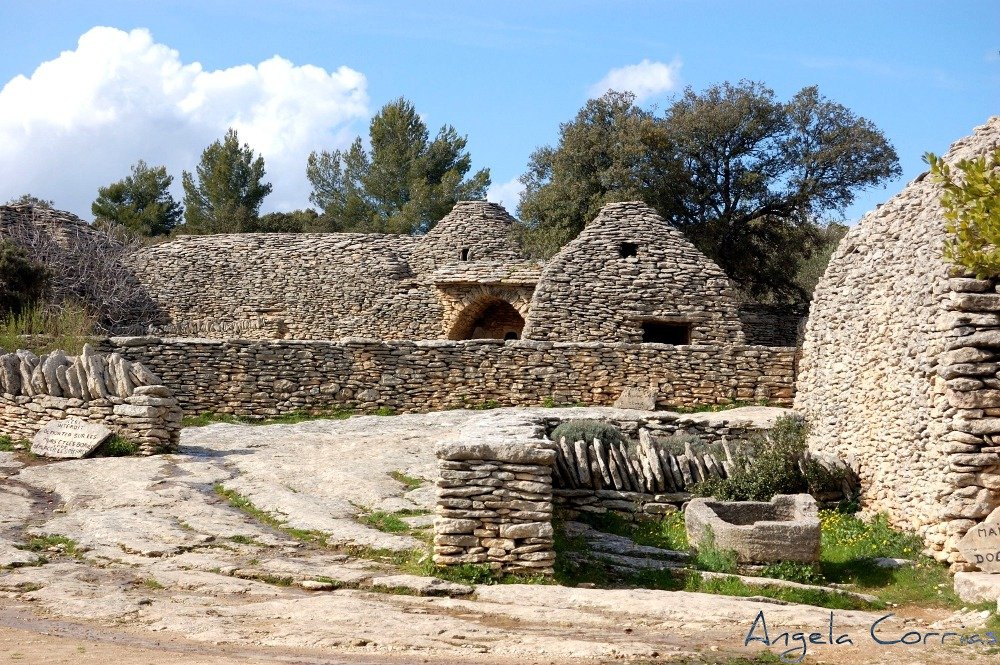 On my way down the Luberon mount in the Vaucluse department, my attention was captured by a modest sign pointing towards a tiny entrance. I was about to access the mysteries of the Village des Bories, a cluster of stone buildings reminiscent of ancient times and looking like the remnants of a lost civilization. Located a stone’s throw from stunning Gordes, one of the most beautiful villages in Provence, Village des Bories is an interesting historical landmark to visit in this southern French region.

Even though we went on a warm and clear day, we only see one other group of visitors, so we had the village pretty much to ourselves and could just wander undisturbed and stopped for as much as we liked to observe the bories and picture the former local life all throughout the holm oaks and Mediterranean scrub.

Village des Bories is an easy day trip from Avignon or Cavaillon and right next to Gordes, so almost one of the town’s attractions.

What to see in the Village des Bories

Being from Sardinia, an Italian island dotted with stone towers all over its territory, the whole stone Village des Bories looked pretty familiar. Our stone towers are called “nuraghi” because they date back to nuragic times. Stones are not glued to one another, but simply lean against each other, and have managed to hold this way for some 3,000 years.

The bories, on the other hand, are made with smaller and sharper stones. Their aspect is as austere as Sardinian bronze-age towers, and while I strolled about what seemed like a ghost village I had the impression to be stepping back in a remote time.

The different stone huts have different purposes: they can be houses, caves, sheep-pens, or just different working areas.

A stroll around this otherworldly place is very fascinating as the village is kept in its original settings, making it easier for us to imagine the daily life of these huts dwellers who, judging from the way they built their village and the fact that their houses are still there despite passing centuries and different weather conditions, must have been pretty clever.

The huts were built without using a mortar just by stacking the calcareous stones on top of each other. The material they used, the style and the color are a perfect match to local environment.

The tour of Village des Bories ancient town is completed with a small photo gallery that puts the visitor on a geographical and historical journey following the creation of similar stone buildings all over the world, from Sardinia to Turkey, to California.

Journeying through the village is a little like journeying across the history of Provence, and understanding the evolution of its society through its working tools and dwelling habits.

Historians and researchers have been trying to trace the origins of these stone buildings and what they all agree on is that the bories date back to the Bronze Age. As far as the village is concerned, some say it was founded around the 7th century while others studies insist on the 15th century due to the findings of the area. Diggings have shown objects and material from different ages, shedding light on the possibility that the site was had been inhabited for a long period of time, probably even until the 19th century. The Village des Bories, in fact, was inhabited until 1839 and then abandoned until the 1970s when the local administration decided to restore it and open it to visitors.

Even though at an inexperienced eye the Village des Bories might look all the same, but every hut has its own purpose and function. Some served as residences, some were barns, bakeries, grain lofts and shelters for animals such as hens, goats, pigs and cows. With so many different ways to use these stone huts, it soon became clear that the village was organised in a structured society and its residents had their own roles.

The word “borie” comes from the Latin “boaria”, meaning oxen stable. Even though originally in Provence this type of huts had the functions of keeping working tools and shelter the castles, gradually they became country houses, to permanently live there at first, and then as holiday homes.

Where is Village des Bories and how to get there?

Village des Bories lies some 4 km southwest of the famous town of Gordes that attracts every year thousands of tourists. While there are some buses from Cavaillon and Avignon, it’s probably better to drive around Provence as when I was there, I really didn’t see much public transportation from a town to another. You can rent a car at Marseille airport or even in Avignon.

When I went, there was not much traffic and the roads were pretty large and easy to drive on. Very likely your rental car will have a navigator, but in case it won’t, Google Maps is your friend to get around Provence villages and towns. From Gordes, take the D15 southwest towards Cavaillon and you’ll get there after a few kilometers. Drive slowly to see the sign and also because it’s a narrow two-way road.

Entrance fee: €6 for adults, €4 for children over 11 years old.
Opening hours: Every day from 9 am to sunset.