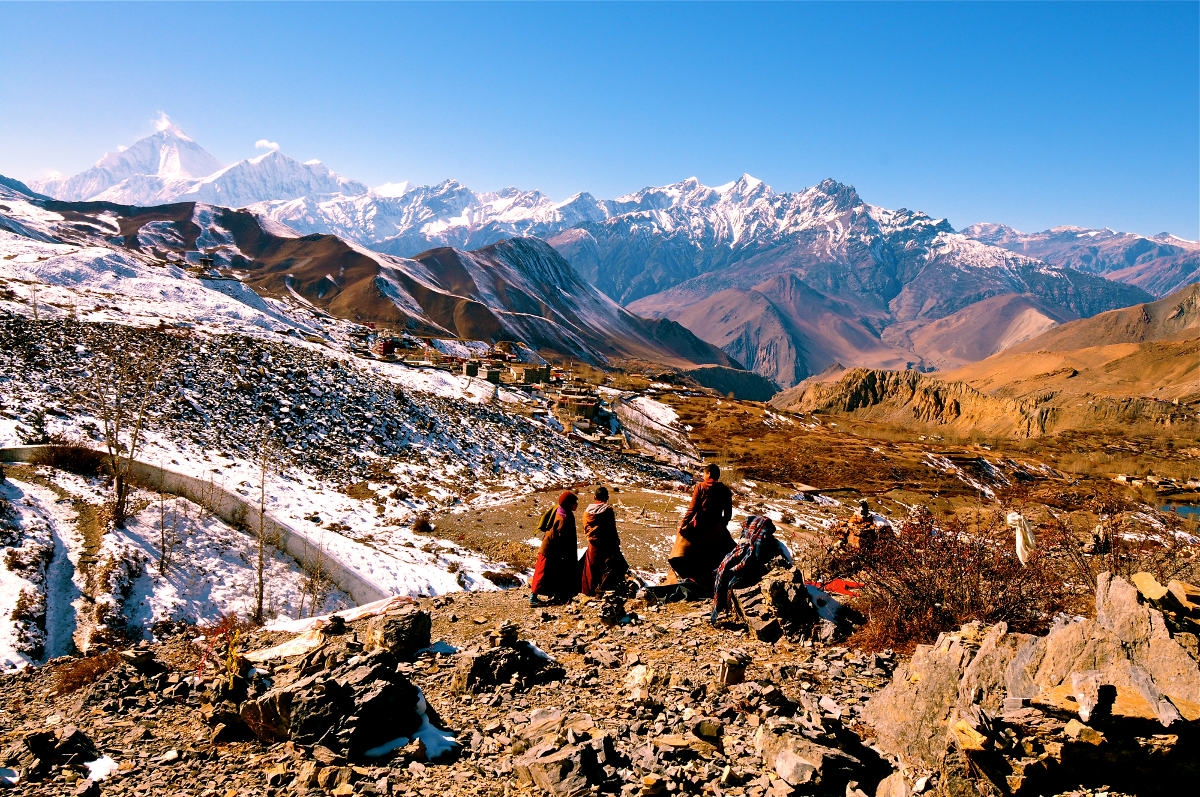 When you think of the Himalayas, what comes to your mind? Mt. Everest? A majestic trekking experience? Nepali cuisine? Alpine forests? Snowcapped peaks? The chill in the air? Nomadic tribes? Serene isolated monasteries? Well, the Himalayas are a combination of all of these and much more, and discovering the best Nepal trekking places adds up to the adventure.

Since centuries, the Himalayas have been a place, a muse, an inspiration for people of different kinds. Artists, painters, poets, storytellers, musicians, all come here to escape the world they know and are tired of.

The Best Trekking Places in Nepal

Trekking in Nepal is an overall experience that brings all things good to you. It doesn’t burn a huge hole in your pockets, the natives are very welcoming and enthusiastic to meet you, the weather is a relief from global warming, the food is wholesome and nourishing, the air is clean and rejuvenating, and the sceneries are mesmerizing at each step.

But some of us may find it too difficult to choose from the array of trekking trails that Nepal has to offer. With each trail being excessively aesthetic, one may even feel greedy to explore all the trails in time. This is why people flock in such large numbers every year. Nepal attracts around 200.000 trekkers every year to her land.

However one needs to be pragmatic when it comes to questioning why they are choosing to scale a certain trail. You need to ask yourself:

The Everest Base Camp Trek

The most famous trekking destination in Nepal is the Everest base camp trek. Stay in the lookout for a vacancy for trekking to this destination, as there had been several deaths due to over-crowding on this trail in the month of May 2019. Anyhow, let this not bring down your spirits.

The Everest base camp trek takes you through plenty of Sherpa Villages. The Sherpas may be the most blessed people on this planet living sustainably on the most sought-after place in the world.

When you reach the summit of this trek, not only do you stand face to face with the highest mountain in the world, but also catch magnificent views of the other peaks namely Nuptse and Lhotse. En route, you pass the Dudhkhola and the infamous Namche Bazar.

The Annapurna Base Camp Trek

The Annapurna base camp trek takes you through the remote villages of the Gurung tribal settlements. This trek surely provides a closer connection to the traditions, lifestyles and the customs of the Gurung Tribe. This trek leads you to the base of the 10th highest peak in the world that.

Standing on the base camp you will get the aesthetic sight of the fish-tail shaped peak (known as Machhapuchhre) right in front of you. It also leads you through thrilling suspension bridges and noisy rivers such known as Modi Khola.

READ MORE: Top 20 Things To Do In Nepal For An Adventurous Holiday

This is probably the most famous treks for beginners and easy trail searchers. The trek is short and aesthetic as it takes you through oak forests, Rhodendron trees taken care of by the Gurung community native to this area.

This trek takes you to the most beautiful point to view the entire Annapurna region which is why it is also known as the Annapurna panorama trek. You will pass the Pokhara valley and the pristine still-water lake known as the Phewa Lake.

This is a trek for the introverts. The path is uncrowned and serene with a silent wind hustling through the branches. This will lead you through lush green valleys and meadows during the springs and snowcapped valleys during the winters.

The best part about this trek is that you may be lucky enough to encounter endangered species of wildlife such as the grey wolf, snow leopards, golden eagles and the red pandas.

Mustang has a dry terrain and is one of the driest valleys in the Himalayan region. This trek takes you to an old Buddhist kingdom of Lo that is rich in architectural Tibetan history.

This area is inhabited by the Thak people; they are half Tibetan half Nepali people living in cultural amalgamation in these dry but richly cultural lands. The most enjoyable part of this hike will have to be the number of sacred monasteries you pass by, the 108 Chortens you will spin, the Buddhist prayer flags known as the Thanka that decorates the dry mountains with just the right amount of colour.

The Langtang Valley trek is different than others. This trek leads you through a national park that was newly built after the ravaging earthquake in 2015, known as the Langtang national park. The natives’ villages belong to the TAMANG tribes of Nepal. This warrior tribe lives alongside in peace with its sub-tribes especially the Yolmos.

Here you will get a deeper look at the traditional lifestyles, livestock, dresses and the language of the Tamang people. When you reach the summit of this valley you will be mesmerized at the beautiful sun-kissed peaks of the Gosaikunda, Langtang and the Ganesh Mountains along with many more visible peaks. Here, you will also get a chance to visit the oldest yak cheese-making factory in the country.

This is a short and easy trekking option that takes you to towards the highest mountain peak in the world. The vantage point is located just about the Sherpa villages in Namche Bazar.

When you arrive at this bazaar you will feel like you never want to go back. Because you will be right on the foothills of the highest mountain peak surrounded by a surreal bazaar selling exotic Himalayan items and along with that you will have modern facilities like the internet at your disposal.

This trek will take you through the oldest monastery in Tengboche, the traditional lifestyle if the Sherpa tribes and a magnificent panoramic view of the Mount Everest.

The Gokyo Ri is the most attractive destination of the Khumbu Area. If you are a lakes person, this is the best trek for you. This is because it has the most beautiful 5 Emerald lakes, an arch of snow-clad mountains, and the country’s largest glacier.

The trek offers grand views of the magnificent ice ridge between Cho Oyu and Gyachung. The best part of the trek would be when you stand near the lake and see the reflection of the magnificent peaks on the turquoise waters of the lakes and wonder if the mountains were within the lakes as well.

The Gokyo Ri Trek is one of a kind treks that offer grand landscapes and pristine creations of nature. You will pass through alpine forests and plenty of suspension bridges on this trek that will lead you to paradise lakes clustered below the mountains.

The Kanchenjunga Base Camp Trek

This trek is for the adventure-minded thrill-seekers who don’t like crowded areas. The Kanchenjunga base camp trek is a difficult trek that leads you through isolated and pristine alpine forests. You will be surrounded by the raw and unspoiled beauty of the nature of eastern Nepal. You will also be able to witness the untouched cultures and people of this region during the trek. When you reach the vantage point you will behold the glorious views of the 2nd highest and the 5th highest mountain peaks in the world, namely mount Kanchenjunga and Mount Makalu.

To do this trek you will require being in a pair as the permit requires at least 2 people to be on this trek. You will also have to be accompanied by a Nepali Porter and a Nepali Guide who knows the terrains thoroughly to perform this trek.

This is the kind of trek in Nepal that leads you through the all the scenic points in this particular region; which is why this is a comparatively longer trek and strenuous at the same time. But if you want to explore everything that has to do with the Mount Everest, this is the ride for you to tag along.

This also leads you through the beauty and isolation of the eastern Himalayas along with bringing you face to face with the tough lifestyle of the Sherpa Tribe living on the foothills of the highest mountain of the world. You will fly to one of the most dangerous airports in the world called the Tenzing Hilary airport, and visit the oldest monastery in Tengboche.

Along with that, once you reach the high point of this trek you will be able to view the mesmerizing peaks of the Mount Everest, Mount Changtse, Mount Cholatse, Mount Lhotse and Mount Nuptse. You will also climb the Khongma la, Cho la and Renjo la passes along the trail. And the crowning jewel to the trek would be the pristine turquoise lakes at Gokyo Ri.

So as you can see there are quite a lot of trekking trails to suit the interests of all kinds of trekking enthusiasts. All you have to do is choose the best trail that suits your interests and start on this life-altering journey to the Himalayan country of Nepal and face the longest surviving inspiration of the world, come and explore the Himalayas.

WANT TO READ IT LATER? PIN IT TO YOU BOARD!