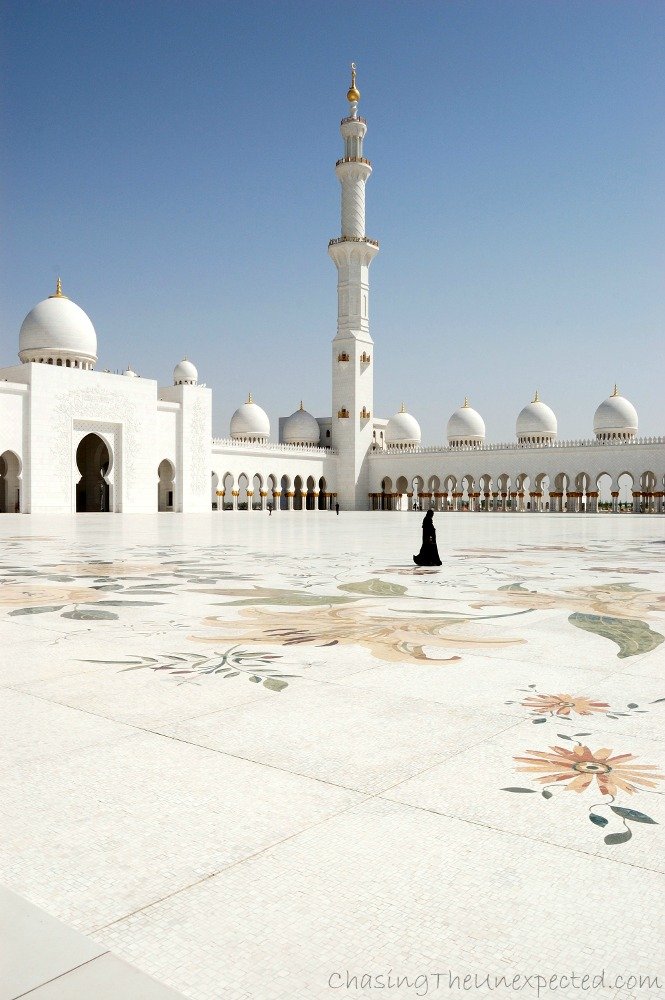 The Sheikh Zayed Grand Mosque in Abu Dhabi had to put up signs to warn the visitors about what they can and cannot wear. This is why, to make it easy for future visitors, we have listed a couple of tips about the Sheikh Zayed mosque dress code for both men and women.

The mosque’s committee has decided to place large billboards at the entrance warning that women cannot wear tight and revealing clothing, no matter how covered they are.

The warning billboards became more visible around four months after the American singer Rihanna was photographed at the mosque dressed in a tight-fitting black outfit. Despite being covered head-to-toe, she was asked to leave and the mosque put out a statement saying that she had broken the local moral code.

Planning your visit to Sheikh Zayed Grand Mosque: Know before you go

As of today, Pre-booking is necessary to visit Sheikh Zayed Grand Mosque in Abu Dhabi. You can do everything online and obtain a pass by following the steps from the website https://visit.szgmc.gov.ae where you need to include your personal details.

The vision behind the construction of this huge religious complex has been since the beginning to blend architectural styles from different Muslim countries and civilizations as well as employing artists from all over the world. And this is how you have an elegant mix of cultures with features from Iran, such as the huge carpet, Morocco, Turkey, Pakistan and Egypt, and the best artists and materials from different countries such as Italy, Germany, China, and England.

The mosque features really amazing decorations such as the world’s largest hand-woven carpet, gorgeous chandeliers, including the world’s largest, decorated with Swarovski crystals, Arabic calligraphy, and flower patterns on the marble walls.

When entering the mosque complex, the first thing you will notice is the forest of pillars and many domes. The outside columns, more than 1000, are made of white marble and decorated with precious stones such as lapis lazuli, amethyst and red agate. The interior pillars are made in mother-pearl from China.

On the other hand, the domes, present in many sizes, are in white marble culminating with a golden glass crescent. Their interior is decorated with Moroccan artwork and the biggest sits in the heart of the main prayer hall.

The amazing carpet inside the mosque is a project of Iranian artist and carpet maker Ali Khaliqi and shows nature-inspired patterns representing the Islamic idea of heaven. Hand-knotted by more than 1000 craftsmen, to be ready it took more than a year and it measures 5700 square meters made of 70% of wool and 30% of cotton.

The entrance signs show pictures of six men and six women, half picturing the correct dress code, the other half where images are not dressed correctly. The Sheikh Zayed mosque dress code signs have been introduced so that the worshipers are not offended.

Sheikh Zayed Mosque is one of the most popular attractions in Abu Dhabi. Every day thousands of people visit it. Obviously, the message is for the small foreign minority who either ignore or deliberately do not respect the rules and culture while visiting the mosque.

The billboard shows that hijabed women with loose-fitting pants are permitted, so tick marked. Although, a woman with a headscarf still wearing tight pants or a skirt will not be allowed in. The violators will NOT be allowed to enter the mosque.

Before entering, women will also be given an Abaya which covers you from head to toe and when your tour is done, you need to hand it back to the exit door. Women can also wear long trousers as long as they wear a headscarf.

The entrance signs also ban clothing with profanity, see-through clothing, shorts and short skirts, sleeveless shirts, tight clothing, swimwear and beachwear. The illustrations show that a kandora/dishdashas or suit is permitted for men, as are casual clothes that cover the legs and upper arms.

Among other behaviours visitors need to maintain are a non-smoking policy, not eating nor drinking, keep silent and turn off your mobile phone, or maybe silence it if you want to take photos with it, since taking pictures is allowed.

Visiting during the holy month of Ramadhan is allowed from Saturday to Thursday 10 am-6 pm and 9-11.30 pm. On Fridays, from 2 pm.

You are not required to have a guide in order to walk through the mosque, even though tours are available on site and prior booking is not required. There are day trips from Dubai to Abu Dhabi showing the main landmarks of the UAE’s capital including the mosque.

All the tourism services are offered free of charge. There is no entry fee for the Sheikh Zayed Grand Mosque unless it is the admission to some exhibitions or events.

Where is Sheikh Zayed Grand Mosque?

Address: Sheikh Rashid Bin Saeed Street, Abu Dhabi. To get there, I suggest taking a cab since they are not expensive and since I don’t remember much of efficient local public transport. In fact, if you are staying in Abu Dhabi for a few days and would also like to visit other cities in the UAE such as Dubai and Al Ain, you should probably rent a car at Abu Dhabi international airport upon landing.