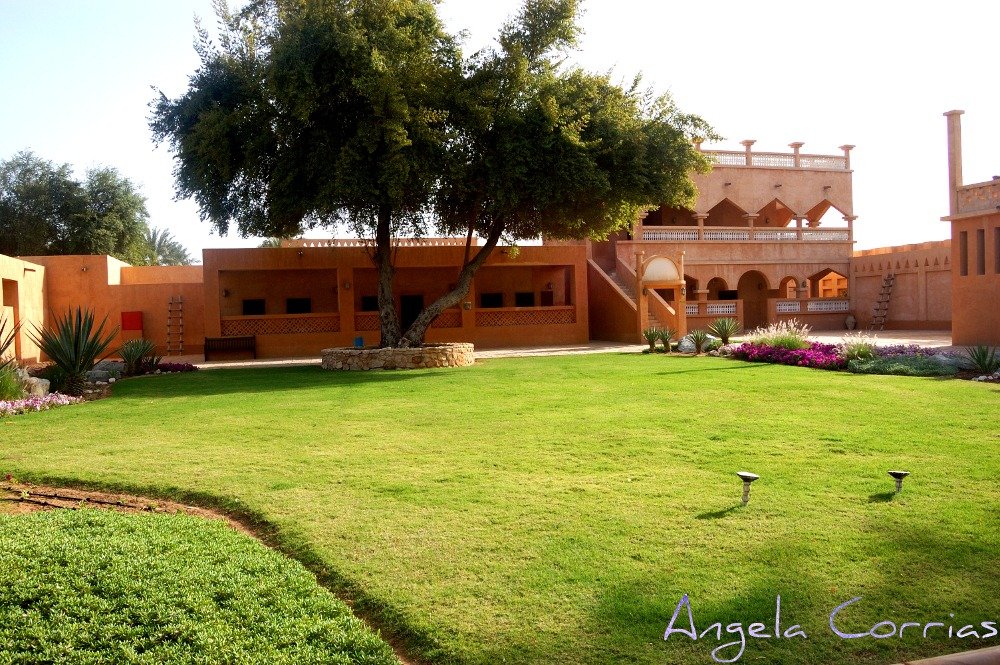 One of the best day trips from Abu Dhabi you can arrange while in the UAE is to Al Ain. Obviously, the first stop of your Al Ain tour must be Sheikh Zayed house. Read on and find out why!

Abu Dhabi and Dubai have been strongly imposing themselves on the world map, and their ever-evolving realities have led newspapers to employ rivers of ink dissertating about every aspect of this fast-changing society, its contradictions and challenges, its state-of-the-art architecture and always more globalized trends.

While Abu Dhabi, that grounds its wealth on the copious oil reserves, has managed to better retain its Arab identity, Dubai has compromised more in order to boost the Emirate’s tourist- and investment-driven economy. If this may seem to be relentlessly causing the gradual loss of the country’s original character, it wasn’t enough to make me give up on my quest for the legendary spirit of deserts’ nomads.

Since I landed in the UAE’s soil, no matter what kind of conversation I was involved in, the ever-present name I was faced with was Sheikh Zayed’s. “ He’s the Father of the Nation,” people echoed in some kind of local ritornello. Fair enough, I thought, every nation has a father.

I realized I was developing an unhealthy fixation on Sheikh Zayed when I started mentioning him even when locals weren’t, in a somehow desperate hunt for any small detail I couldn’t capture from previous discussions, uncomfortable gaps that only natives’ unwritten knowledge could fill. The reason why I had never heard of him was still a matter of personal conjecture, but my curiosity was reaching unprecedented levels of unease, and I had to do something about it.

I felt only a small relief from my alien status of “Sheikh Zayed-unconsciousness” when I met Shymaa, an Egyptian-born young lady, who confessed she couldn’t believe herself that people were actually happy about their president: “I’m so used to Egypt, where everybody complains about anything political that here I feel like I’m living in another planet!” Tell me about it, I come from Italy.

I was bent on digging up on this character, his life, his ideas and why on earth everybody was happy about him. I felt I couldn’t go back to Europe with the usual postcard memories, I wanted more, I wanted to catch the soul of the nation, and the perfect place to start with was, naturally, its Father’s residence.

Al Ain city tour, visiting an oasis in the desert

This is how I wound up in Al Ain, 135 km away from Abu Dhabi, the very moment a sand storm was raging. Despite being the emirate’s second city for size and relevance, it has managed to retain much of its old charm and spirit. Here, Sheikh Zayed Bin Sultan Al Nahyan has lived with his family between 1937 and 1966, was appointed as the city’s ruler in 1946, and was elected the first president of the UAE and ruler of Abu Dhabi in 1971.

These were the fragmented pieces of information I had managed to gather around the recurrent, yet slippery, figure of Sheikh Zayed, and this was what convinced me I had to put a bigger effort in the issue if I wanted to decrypt the sibylline inklings locals were giving me.

Built around green oases, Al Ain boasts a land rich in minerals and lush vegetation that have earned it the title of “ Garden City”. Nestled at the feet of the Jebel Hafeet mountain, it sits at the very border with the Sultanate of Oman. Here the desert is renowned for its red colour, but although I was dying for plunging into those boundless landscapes, the sandstorm imposed me to restrain myself from venturing too far out of the city.

Western brands peeping out of old-fashioned shopping malls little match the more traditional restaurants and cafés that overlook the large main road. Here everybody deals quite well, at least apparently, with the compromises of globalization, but a tourist in the lookout for primordial traditions might find it disappointing to come face to face with Starbucks in the middle of the desert.

What did Sheikh Zayed do for the UAE?

The United Arab Emirates as the country we know today is pretty young: the British withdrew their military occupation in 1968 and the seven emirates, that until then were mainly desert lands organized in tribes, decided to unite in 1971. Clans’ leaders elected Sheikh Zayed as the first president of the newly born country, in charge of leading its people into the future. And so he did.

After a quick historical research, I could see why the UAE’s inhabitants still hold a great admiration for Sheikh Zayed: he has raised the status of the country from struggling pearls-producer (market that collapsed when Japanese scientists discovered the cultured pearls) to economic power, and has laid its foundations on the principle that the native population above all would benefit from future progress and wealth.

Visitors and expats are more than welcome but, as Sheikh Zayed has unequivocally established (and his son has maintained), locals can rely on a wider range of benefits compared to foreigners, to avert any risk of future exploitation of the indigenous. For that matter, expats don’t seem to find this very disturbing, as they constitute the majority of the whole population: almost 80% in the emirates of Dubai and Abu Dhabi.

All clever political moves, all detectable in laws and decrees still in force, all have left a glorious legacy. But I wasn’t happy. I was looking for more, I was looking for the man, his personality, his mood, his qualities and flaws. He had ruled the nation for almost forty years, he must have left his human imprint somewhere.

Before the institution of the UAE, life in the desert went by smoothly, albeit with the notorious hardships poverty can cause. Within the clan, social issues were handled through personal relations and the small number of members made it much easier to found life upon cooperation and solidarity. Once the UAE was created, Sheikh Zayed kept on living according to the principles of the tribe he had grown up in, ideals that mould his personality since he was born in 1918.

“A country is not measured by the size of its area on the map. A country is truly measured by its heritage and culture.” This is Sheikh Zayed’s welcoming message to whoever visits his residence in Al Ain. “He really thought that, and he lived all his life up to his ideals,” announced my friend Anne, a British-born expat who’s been living in Abu Dhabi for more than twenty years. Never forgetting his Bedouin roots, he ruled his country with the same spirit and pride as if he were ruling his clan in the desert.

Entering Sheikh Zayed’s pastel-coloured palace, I was faced with a long hallway on my right clothed with framed paintings of the male members of the family. The walled residence, now a free-entry museum, is huge (Zayed had a big family, only the sons were nineteen, nonetheless) and poorly decorated: nowhere near the royal palaces I have visited in Europe.

Built in 1937 and adapted as a museum in 2001, it has maintained the austere aspect of its humble beginnings: Zayed himself, in fact, established that his palace would have to be kept the way it was when his family lived there, and a honest reflection of the country’s spirit prior to the prevailing winds of change of the post-oil era. This made it much easier for me to picture white-clad men dawdling about the vast gardens or having some sheesha while the women of the household, all spruced up in their elegant abayah, were busy welcoming guests and offering Arabic coffee.

Women’s quarters lie modestly separated from the men’s area, as the Arabian tradition prefers. Guests and workers were devoted further space beyond the wide palm-shaded courtyards that divide all private rooms from each other. The children of sheikhs’ families are usually house-schooled, and this palace made no exception. As a proper Muslim family, knowledge was not complete without the teaching of the Quran, for which there is a specific place just opposite the normal classroom.

All spaces are decorated following a simple Arabian style inspired by the nomadic roots of their dwellers: surrounded by thick walls in order to chase the pitiless heat away, long horseshoe banquettes covered with colourful cushions are the main furniture. In the middle is the necessary equipment for making the traditional Arabic coffee. Guests are very welcome in Arab houses and will always find ready drinks and meals: according to tradition, abundant food is prepared in the
ever-possible case that a stranger shows up unexpected.

Sheikh Zayed mosque in Abu Dhabi, a tribute to his memory

After visiting Zayed’s intimate spaces, I knew I got as close as I could to his nature. His personality stays wrapped in a haze of mystery, and maybe only the members of his clan can fully understand it, thanks to the set of tacit principles that belong to a land and that only its people can carry. As for me, I can’t say I managed to reach my goal completely, but far from considering this as a failure, I take it as a challenge, to be tackled step by step.

His tomb rests in Abu Dhabi, the capital of the UAE, just beside Sheikh Zayed Mosque, the main worship place, devoted to his memory. An impressive collaboration of Arabian and Moorish styles, this Muslim temple is an awe-inspiring mix of Carrara marble and Murano glass. The main hall can seat 9000 worshipers, and the inside floor is covered with the biggest carpet in the world.

It represents a huge green meadow because this was Sheikh Zayed’s greatest dream, a quintessential legacy of his nomadic roots. So now, when the call to prayer sounds, his soul will join his people in this oasis created especially for him in the middle of the Arabian desert.

READ MORE: What to wear at Sheikh Zayed Mosque in Abu Dhabi

How to reach Al Ain from Abu Dhabi and Dubai

The easiest way to reach Al Ain from Dubai or Abu Dhabi is by car. If you don’t want to hire one, you can rely on the local buses. There are several buses departing every day from Abu Dhabi bus station to Al Ain bus station and the trip takes about two hours.

From Dubai, you can take a bus from al-Ghubaiba bus station and Bur Dubai taxi station and the trip will take less than two hours.