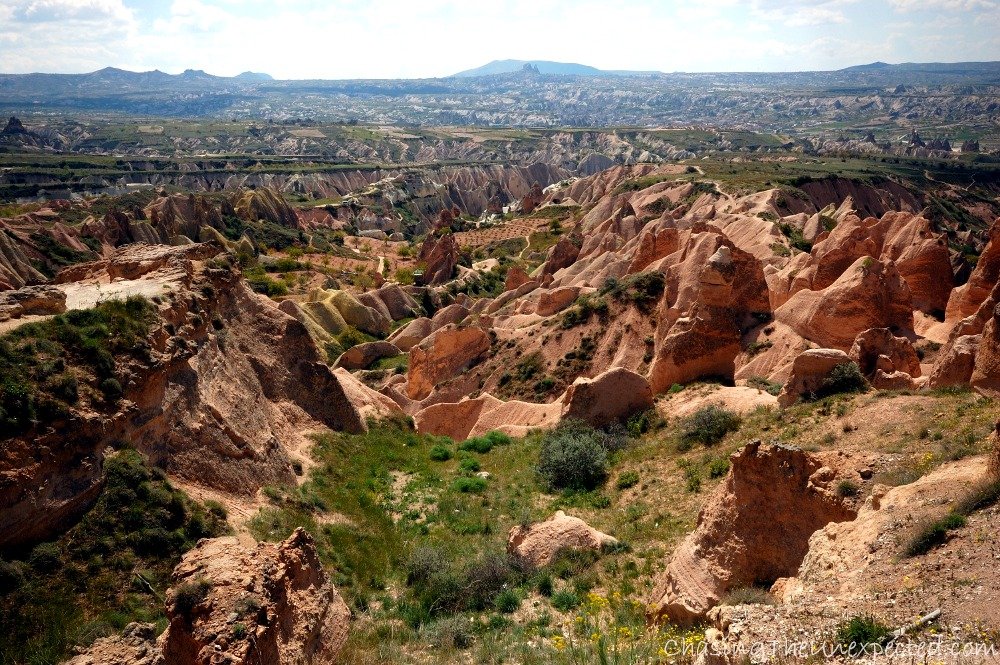 After days in Cappadocia, one of the top destinations in Turkish holidays, we thought we had gotten used to natural beauty. But getting lost around the Red Valley and Rose Valley revealed a never-ending surprise. If you are planning a trip, there are so many things to do in Cappadocia, and one of the best is exploring its several open-air wonders. Check out our adventure hiking up and down the rock formations of the Red and Rose valleys.

Visiting the Red Valley and Rose Valley in Cappadocia

Hiking the Rose Valley and Red Valley in Cappadocia, our experience

We reached the Red and Rose Valley from Goreme and the first thing we found at the entrance was a green expanse with the typical colourful rock formations. A perfect introduction to what we were about to experience.

We went through dark tunnels, rickety ladders, slippery slopes, narrow passageways and muddy alleys. But, despite the difficulty, we had a great time going up and down the picturesque tuff chimneys that make Cappadocia one of the most fascinating and mysterious regions in Turkey.

The deeper we entered, the more breathtaking the views. The typical rock formations really defined the landscape as far as the eye can see. The shades went from a light ochre to pinkish to closer to red, with some white and also some vegetation that gave the green interruptions to such a barren environment.

During our climb up and down the tuff chimneys of Cappadocia’s Red and Rose valleys, more gorgeous view kept unfolding before our eyes. We were even told which was the Rose Valley and which one the Red Valley, and probably from afar you can better spot the difference in hues, but once you are on top and walking on them, it’s harder.

Our adventure around the Red Valley and Rose Valley in Cappadocia Turkey was probably the most satisfying for the eye and the most awe-inspiring. I admit, sometimes I did get despondent for the hardship of the routes, but the views were so amazing that they were what kept us going.

In the breaks from climbing up and down the chimneys, you will find some flat paths that will feel like a stroll in the park, and tunnels to explore the rock from inside.

Sometimes I did get shaky. Going up a rickety ladder was not really my choice but there was no other option. Admittedly, this was the moment when I felt more uncomfortable, not because the bolts were not tightened enough, I learned that later, but because apart from being shaky, on top I found mud and, with my camera hanging from my neck, I didn’t even know where I could hang on to.

While visiting the former Greek region of Cappadocia in Turkey, we wondered about another region, the island of Cyprus, that is currently divided between Turkey and Europe. A stormy past and the common Greek/Turkish feature would make it for a fascinating travel destination.

–>> If you, too, are interested and curious about the region, check out the things to do in Cyprus and get some travel inspiration!

After visiting the Red Valley and the Rose Valley, we headed to Ürgüp, a small town where we wanted to visit the ruins of Saint Theodora (Tagar) and Pancarlik Churches from where we could see the famous “mushrooms”.

While the view was not as full as in the Red and Rose valleys, after doing some more climbing, visiting some more crumbling churches and viewing more frescoes, we managed to get uphill and take photos of the rock “mushrooms” we were looking for.

Goreme is one of the most popular towns in Cappadocia, many travellers decide to stay there overnight and it really is a magical place. It’s some 10 minutes drive from the Red and Rose valleys so you can just ask your hotel to call a driver for you.

From Goreme, you can also visit Goreme Open-Air Museum, which is very close and very much worth it.

Uchisar is a high-elevated town famous for its castle carved out of a rock. You can visit the castle and from its top, you can enjoy a beautiful view of the Pigeon Valley. Uchisar is some 5 minutes drive from Goreme and 15 minutes drive from the Red Valley and Rose Valley. From Uchisar you can also take a tour to the Ihlara Valley.

How to get to the Rose and Red Valley

By car is certainly the easiest way. You can ask the reception of your hotel in Cappadocia to book you a driver and in a few minutes, you will reach the Red and Rose valleys. There is also the possibility to rent your own vehicle, either a motorbike or a car, but not all the roads are smooth and some places can be tricky and poorly signaled to reach, so relying on a local driver might be your best option.

6 thoughts on “Hiking the Red Valley and Rose Valley in Cappadocia, Turkey”