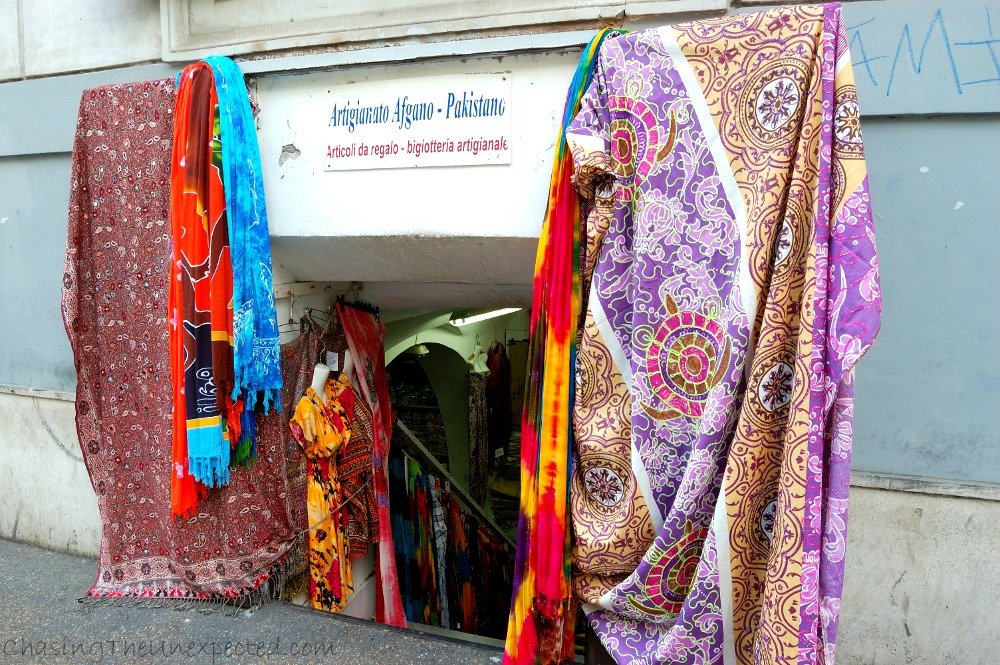 Living in Rome has the great benefit of giving me the chance to explore every single corner of such a culturally rich city. When I was traveling constantly and leading a pretty nomadic life I thought I needed to stop somewhere for a while to have more time to regularly update my website. As it turned out, and if you follow me by now you know it full well, since I’ve been living in Rome I’ve had less time to devote to my beloved travel blog than when I was on the road. And I assure you, it’s been really painful thinking every day that yet again I wasn’t going to be able to update my site.

Today, even though I’m still pretty much snowed under with work, I’ve decided I could devote some time to my own blog and keep you posted with some of the things I’ve been up to.

One of the latest activities I’ve done in Rome is a tour around its most multicultural neighborhood, sprawling from Piazza Vittorio all through Via Merulana, Via Leopardi, Via Lamarmora up to the Nuovo Mercato Esquilino, the farmers’ market mainly managed by the foreign communities populating the area.

I booked the Roma Migranda Tour, tour within the Città Migrande project, and we visited the Buddhist Temple, a Chinese herbs and tea shop, a lovely Afghani/Pakistani textile bazaar and the church of Santa Maria in Prassede.

The tour included also a short visit to the local market of the area, that was moved only recently to an indoor facility, while for decades had been open-air all around Piazza Vittorio, where there is the metro station of the same name. Obviously, originally the market was a proper Roman farmers’ market, with typical regional produce, while now, since the area has become a truly multi-ethnic neighborhood, the market is the perfect place where to find products from all over the world, from tofu to coconut milk, from soya sauce to all types of curries and beans.

I’ve really enjoyed the tour because I’ve discovered places I had never been before, but truth be said, it was far from being my first time there. Actually, I’m kind of a regular over there, I never miss the occasion to go to that market and peruse its colorful and teasing stands. However, what is it really that attracts me in the Esquilino area? Do I really go for the spices?

I’ve given it a bit of a thought and I came up to a conclusion.

I’ve been absolutely loving being based in Rome, exploring the city where I had lived for seven years during college and actually being able to better organize my trips with the mandatory prior research, but after some ten years of living abroad and leading a pretty nomadic life, sometimes I kind of miss being the “foreigner” of the situation. So probably this is why around Piazza Vittorio I feel at ease, I love having the chance to get in touch with different nationalities, to brush up on my feeble Chinese, say “hi” the Islamic way to the Pakistanis and try to convince the Afghanis that no, I don’t have Arab origins.

Seeing how they are trying to blend in the Italian society, hearing many different languages in one morning, finding all the products that I miss from the countries I’ve lived in inevitably reminds me of when I was the one adapting to foreign societies, trying to learn the language and learning local rules and traditions.

I don’t know whether they like being here or they came because in their country they didn’t have a job, like many Italian expats, but somehow having lived abroad myself I feel closer to their needs, their hopes and also their frustrations. To me, it’s a little reassuring to know that I can easily reach so many different nationalities and that even when I don’t have the chance to travel, I can just take the metro and meet the rest of the world in central Rome.

9 thoughts on “In Piazza Vittorio, wandering around Rome’s multicultural heart”