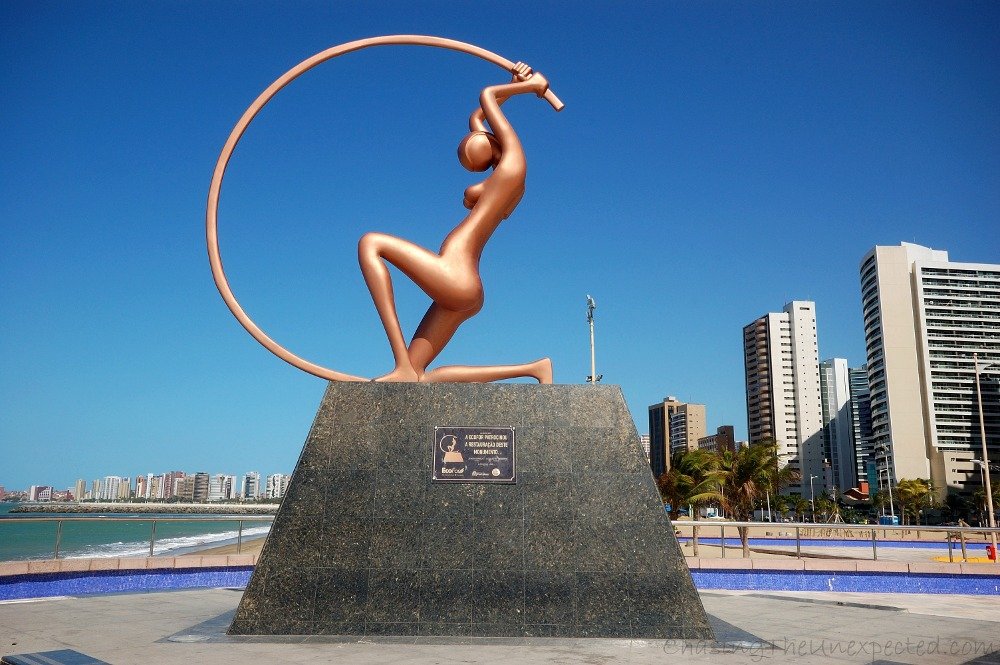 Despite their homonymy, the statue of Iracema doesn’t sit on Iracema beach but in Mucuripe, a beautiful stretch of white sand where fishermen every morning moor their jangadas, traditional fishing boats, after a night spent off the Atlantic shores. Here they sell their daily catch to early customers who rush off no later than 6 am to make sure they find enough choice, and from here we depart to trace the heartbreaking story of Iracema, guardian of Fortaleza.

Every morning I, too, used to go to Beira Mar and Mucuripe, for a walk along their shores, from where I could see Iracema peeping out the palms that divide the beach from the related promenade.

Historical research reports the deeds of a Portuguese called Martim Soares Moreno as one of the fiercest heroes against the Dutch in the 17th century. While the name of Iracema is never mentioned in academic writings, this female figure is strongly rooted in the history of the Ceará state, to the point that only in Fortaleza there are five of her statues.

Who was Iracema of Fortaleza?

Sooner or later, all tourists coming to Fortaleza see, photograph, or get their photo taken with this imposing sculpture, but how many of them know the story behind it? How many know the story of Iracema, the meaning of its name, beyond being the beach where locals always play beach-volley?

Halfway between myth and reality, Iracema perfectly fits the metaphor of Fortaleza’s history. Through the indigenous contamination of the Brazilian Portuguese language, the area’s old traditions, and the following contact with the Portuguese colonizers, José de Alencar, possibly Ceara’s most popular writer, crafts a beautiful short novel that was released in 1865.

Even though Iracema is never mentioned in history textbooks, Alencar claimed his novel stems from tales he has heard since childhood.

The heroine is a young indigenous girl, Iracema, a virgem dos lábios de mel, daughter of the shaman of the Tabajaras tribe. When a young “white warrior” named Martim Soares Moreno, who actually is thought by some to be a member of Pedro Coelho de Souza’s expedition, got lost in the forest near where her tribe lived, Iracema helped him and introduced him to her people, who welcomed him as a guest and friend.

When the Tabajaras tribe received the order from its chief to wage war against the Pitiguaras tribe, of which Martim was a close friend, he decided it was better for him to run away. In the meantime the two had fallen in love with each other and, to further complicate the situation, also Irapuã, the tribe’s chief, was in love with Iracema who could not get married anyway because the shaman’s daughter and the only guardian of the secret of jurema, special potion obtained by a native plant and used during religious rituals that only Iracema knew how to make.

But the girl decided to go with Martim, they were followed by Irapuã, and everything ended in a battle between the two opposing tribes and the defeat of the Tabajaras.

Iracema stayed with the Pitiguaras and Martim, noticing, however, increasing neglect from her husband, who started missing his native civilization and home country. Suffering from the continuous absence of Martim, Iracema started debilitating, refused to eat, and managed to survive only to give Martim their son Moacir (literally “son of pain”) upon his return from yet another battle he took part in, and ask him to bury her under a coconut tree she used to love.

Sad for Iracema’s death (a little too late, if you ask me), Martim went to his homeland, to come back to Brazil after only two years to help establish the Catholic religion and fight the Dutch. Between a battle and a conversion, Martim also visited the place where Iracema was buried letting himself be consumed by nostalgia.

It’s easy to identify the metaphors in this book, the first among all being the Brazilian race (Moacir) born from the mixing of the European with the Indio.

As for me, I read this novel slowly, with the limits of my knowledge of the Portuguese language, and wondering if Iracema would have had a happier life if she hadn’t met Martim at all.

Brazil’s crime rate is notoriously high, so when traveling there you need to pay extra attention to some safety rules. To avoid getting mugged in Fortaleza and any other city in Brazil, instead of carrying a purse or visible wallet, wear loss- and pickpocket-proof travel clothes. They are made with secret and secure pockets where you can keep money or any small object you need to carry with you such as cash, mobile phone, credit card, house keys, etc.
Click here for more information on the types of safety clothes available and the latest prices.

What to do on Iracema beach in Fortaleza

Did the Iracema story inspire you to visit Iracema beach in Fortaleza? Well, if you are into food and nightlife, you are lucky because this beach located in the northern part of the city boasts the highest concentration of restaurants and clubs.

Start your evening sipping a drink in front of the sunset from the pier known in Fortaleza as Ponte dos Ingleses (Bridge of the English) and carry on by grabbing a table for a scrumptious dinner. If you are into regional specialties, don’t miss Estoril restaurant (Rua dos Tabajaras 397) founded by the local Fortaleza municipality.

Night owls will have plenty of fun after dinner around the clubs and bars of this area of Fortaleza. Some of the most popular nightclubs include Pirata (Rua dos Tabajaras 325) right in front of Ponte dos Ingleses bridge, and Lupus Bier House (Rua dos Tabajaras 340), a beer factory where they host shows and cabarets.

Cultural travelers, on the other hand, might want to check the city’s cultural center, Dragao Do Mar, also located in this neighborhood (Rua Dragao do Mar 81). Dragao Do Mar is the place to go to see a contemporary art museum, the Planetarium, live theater shows, and also grab a bite from one of the nearby eateries.

17 thoughts on “Romantic and heartbreaking, the story of Iracema guardian of Fortaleza”