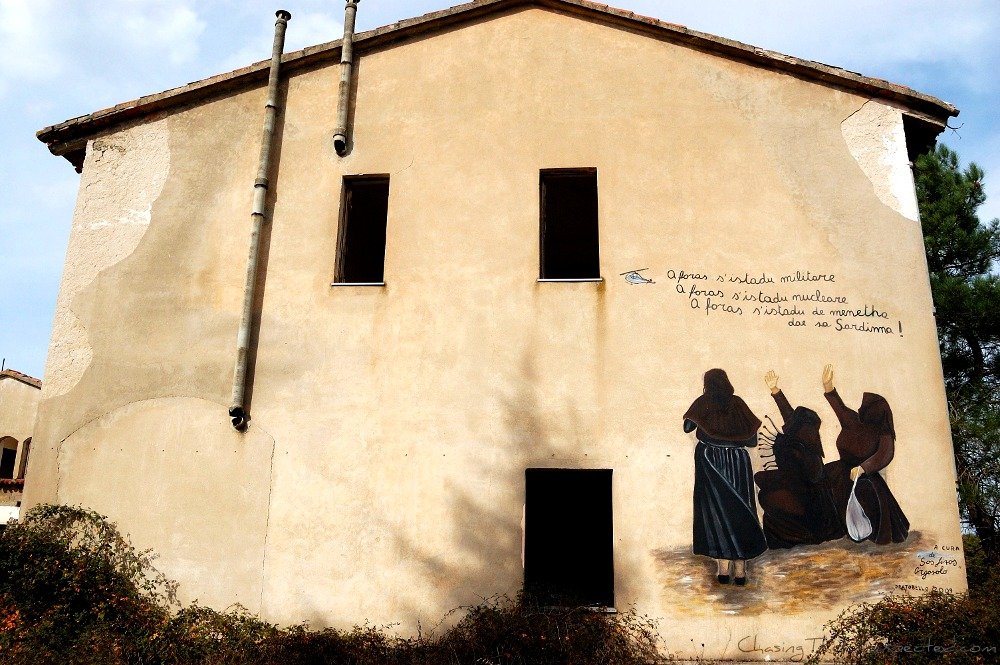 “Does anybody live here in Pratobello?” Smirk. “Who would want to live here?!”

A shepherd from Orgosolo was guarding his sheep grazing early morning and didn’t seem to appreciate our question, and due to Orgosolo’s reputation, we opted not to insist.

At first sight, from the road, that small cluster of wrecked buildings gives for a moment the romantic idea of a ghost town, abandoned for God knows what reason. The reality, however, is different, certainly less romantic, but definitely more uplifting.

If you ever happen to travel to Sardinia, mention Orgosolo and locals will immediately retort: “Mmmm… You don’t mess around with Orgolesi! (Orgosolo‘s townspeople)” True, the village, of no more than 5000 people has built its fame throughout the years around the fact that most of the bandits of the island have originated right here.

Nestled among the harsh mountains of the Supramonte, infamous for being the hostile place where kidnappers of the “Anonima Sequestri” used to hide their victims, Orgosolo has managed to hit the frontpage of local newspapers for long time.

Sardinia has always evoked the idea of being a wild and ungovernable land, inhabited by savage people who live clinging onto their prehistoric manners and who want their independence from the Italian State so that they can be free to live in their wilderness.

Although sometimes the thought that Sardinia was better off as an independent region has crossed my mind, and although I do think its natives are a bit anarchic and “unmanageable”, it’s also fair to say that the definition of “bandits” has often been used in the wrong context and in a misleading way.

As it happens, history gets written by the winners, and such “official” version of the events is what the world knows, studies, memorizes, and natives of a place are bound to accept the fact that nobody will ever ask them what actually happened. This is, in a nutshell, Sardinia’s tangled past.

The island has been invaded, colonized, conquered, divided, looted by countless foreign civilizations and other Italian rulers before the country’s unification.

As long as such rulers, first among all the Savoia royal family of Piedmont, came, took the raw materials they needed, enslaved the natives, and left undisturbed, everything worked fine, but when locals revolted against such raids, then the scary word “bandit” showed up accordingly.

For some reasons that I can’t really explain, the area of Barbagia, in Nuoro province, has always been the most difficult to subjugate, and needless to say, Orgosolo has often been the reference of grassroots movements.

The revolt that involves Pratobello is still topic for debate, but to me, it’s pretty easy to understand.

Since the end of World War II, when Italy came out of the war on the losers’ side of the table, the newly created Italian Republic thought appropriate to amend our sins by transforming Sardinia into a huge military station.

From the northern island of La Maddalena, to the southern base of Decimomannu, passing by the south-eastern Salto di Quirra, big military polygon (officially Interforze, meaning created by all Nato members) where extremely dangerous and polluting tests are carried out, provoking birth defects and cancers, Sardinia has often been considered militarily occupied by the US army.

Following this trend, in 1969, the Italian government started to build the umpteenth military settlement, and since it was in plain Cold War, we have enough reasons to believe it was going to be another US base.

However, the choice of Orgosolo for such a project has proved quite unfortunate.

The town had never shied away from showing their intolerance towards any foreign interference, and a US command in their land was simply out of question. In the good and in the bad, when something happens in Orgosolo, its townspeople are very likely to protect each other and sort out their businesses within their borders. The reason why a military settlement just beside town was inconceivable.

The inner spirit that I like to believe once upon a time belonged to all Sardinia’s natives, and that now seems to be resting only in the impervious Barbagia, arose, and the whole population took part in the revolt.

Women, children, the elderly, and everybody mobilized and lined up on the fields around Pratobello to prevent the military drills from starting. Still today the Orgolesi remember those days with pride: “We were really all united against any military claim. Adults and children alike stayed there for days defying the police sent by the government.”

The facts of Pratobello are among the most important antimilitarist revolts that happened in Sardinia, and certainly gave the rest of the island food for thought for quite some time.

I’m perfectly aware of the fact that many genuine bandits originated from Orgosolo, and of course, I won’t justify their crimes, but when it comes to the military seizing of what should be considered lands for shepherds and natives to make their living, I can’t restrain myself from wondering if also the other areas where military settlements were actually built and still are operational had mobilized, now the island would have been free from settlements and polluting tests.

Countless parliamentary inquiries have been, and still are, carried out on the too many deaths of who lived around these settlements, especially the one of Salto di Quirra, where many researchers allege the use of depleted uranium, so I guess it’s only normal to wish more people had acted like the Orgolesi did.

Today Pratobello looks like an abandoned wrecked, not really a ghost town, more like the breeding ground for revolution, where for once the national government didn’t manage to get away with its arbitrary decisions, and from where many people took inspiration for new actions in those already turbulent years.

I’ll end this story with the words of writer Gianfranco Pintore who, in his book Sardegna, Regione o Colonia? (Sardinia, Region or Colony?), reports a conversation between an officer of the army and a shepherd from Orgosolo:

“How many are you in Orgosolo?”

“You will never make it against the State”

The shepherd smiled and retorted: “Oh don’t worry, we will make it”

Might be a coincidence, but also that time Orgolesi did make it.

20 thoughts on “Pratobello, a ghost town, or breeding ground for revolution?”