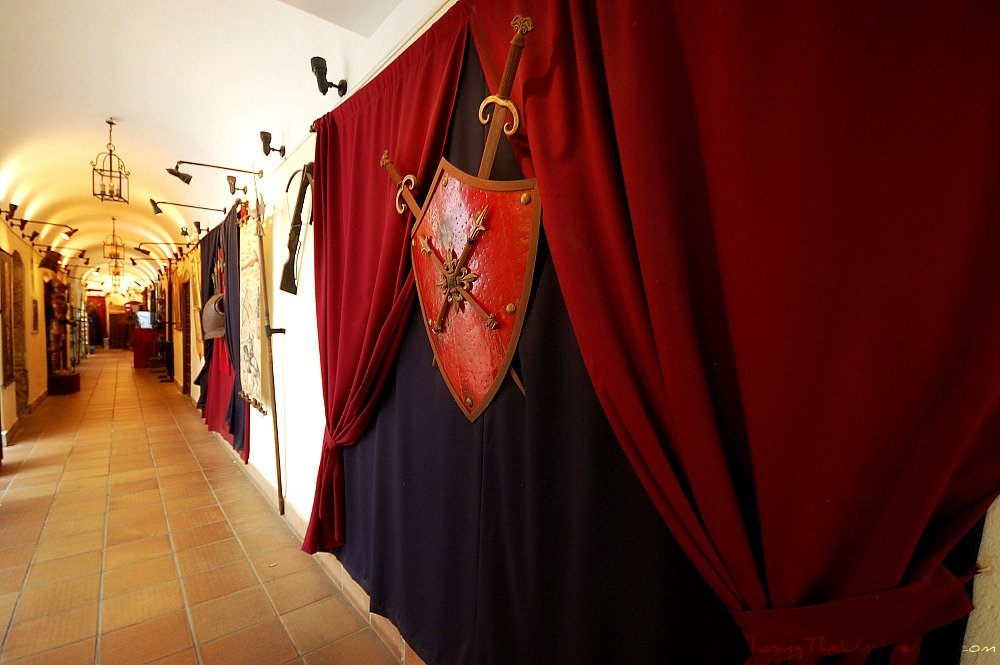 When I made the unfortunate suggestion to visit the Museum of the Inquisition in Cordoba on the last morning of our stay, just before catching the bus to the beautiful Granada, my cousin didn’t show much enthusiasm. “Are you sure?” she told me in an evident effort to talk me out of it. But since I know about her passion for all things history-related, I retorted “Of course! It’s history!”, and I won.

When we showed up at the door it was about 10 am and, in a typical Sunday morning Spanish flair, the museum was still closed. We went to the nearby shop to inquire and the assistant let us know that the museum was “big, wonderful and opened at 11 am.” At this point, having even already missed the 10,30 bus, we had no choice but to wait. We went to eat something at a close bar, and it turned out to be a wise choice since we were not to leave that museum very hungry.

When we finally entered the building where the Museum of the Inquisition in Cordoba, which now is called “Museo de la Inquisicion“, having lost its former, apt, title “Galería de la Tortura“, the guardian gave us the ticket with a grin, in both surprise and mischief. “Before entering, would you like to take a photo with your hands and head in here?” Asked us pointing at the first torture instrument. Our reply came out in unison: “Thanks! We’ll pass!”

As soon as we walked through the red door curtain, we found ourselves immersed in the worst expression of human brutality, the embodiment of injustice and a creepy show of nonsense.

The exhibition of torture instruments was obviously well illustrated by posters that explained the death tools, the contexts they were used, to which sentence they were aimed, and the irrational laws that ruled at the time. So, depending on which crime people were found guilty of, they were victims of a different kinds of torture.

Of course, I knew about the insane rules of what is known as the “Holy Inquisition”, but every time the topic crosses my path, I fume, especially when this happens in such a graphic way as in the Museum of the Inquisition in Cordoba.

I’ve always failed to understand how can human mind envision, conceive, imagine such tools aimed at causing so much pain to other human beings. Nobody will ever talk me out of believing that those who created such evil devices were psychopaths.

The further I went with the visit, half in disbelief half in disgust, ambling about the worst examples of human imagination that was increasing in ferocity as if in a macabre climax, the sadder I grew.

At some point, towards half of the tour, I started to struggle, I couldn’t bear those sights anymore, I stopped taking photos, I started reading voraciously all the illogical laws that imposed rules like “If the prisoner died (!) under torture without confessing, the Inquisition was to find him not guilty because God had given him the strength to stand the pain.”

As the posters displayed at the Museum of the Inquisition in Cordoba read, “the arrest was previously organized in a complicit and stealthy way, and such detention was the beginning of a long path for those eligible to stand in front of capriciously formed courts, with an absolute lack of justice.”

People could be arrested in the most arbitrary manner, it sufficed that someone seeking vengeance reported the person for some made-up crime, and that person was doomed.

Of course, all the people involved in writing and/or passing such asinine laws were criminals themselves, and I believe they were fully aware of this and of the fact they were torturing innocent people.

A modern interpretation of history shows that at that time such nonsense was possible due to the widespread ignorance since not many people could afford an education. Today we have all means to educate ourselves, through schools, books, the Internet, and torture and injustice seem to happen in many parts of the world nevertheless.

A great movie that shows how useless the practice of torture during interrogations is is Milos Forman’s Goya’s Ghosts, where the father of the girl tortured by the Inquisition tries anything to make them release her daughter, even forcing under torture a Cardinal to sign the confession that he was a monkey.

When we left, the guardian looked at us again and said “estaban todos locos (they were crazy)”. Yeah, to put it mildly.

Tips For Visiting Córdoba and the Museum of the Inquisition:

Traveling to a new city can be a daunting experience, but a little planning can go a long way. If you’re considering a visit to Córdoba, Spain, here are a few tips to help you make the most of your trip.

The city is easily reached by bus, and there is also an airport. However, the weekend, especially Sunday isn’t the best day for shopping as almost all stores are closed.

Many shops and restaurants are open until noon and close for siesta during the middle of the day, so it’s important to check the opening hours of attractions in advance. Planning ahead will help you make the most of your visit to this beautiful Spanish city.

Spring and summer are the best times to visit Córdoba because the weather is warm and sunny, and there are lots of outdoor activities to enjoy.

Córdoba is a vibrant city with a rich history and culture. There are plenty of things to see and do, and the locals are friendly and welcoming.

The city is located in the heart of Andalusia, one of Spain’s most scenic regions. From Córdoba, you can explore the stunning mountain villages, stunning beaches, charming towns, and rolling countryside. There’s something for everyone in Andalusia!

More things to do in Córdoba

Visit the Mezquita (Mosque-Cathedral of Córdoba)

If you are in Cordoba and have the time, then you won’t want to miss a visit to the Mezquita, or Mosque-Cathedral of Córdoba. This unique building is a must-see for any history lover or architecture enthusiast.

The Mezquita was originally built as a mosque in the 8th century. Over the centuries, it has been added to and expanded by different rulers, culminating in its current form as a cathedral.

Today, the Mezquita is one of Cordoba’s most popular tourist attractions. Here are some travel tips to help you make the most of your visit:

Try to arrive early in the day to avoid the crowds. Take time to explore the different sections of the mosque, including the stunning courtyard and Mihrab (prayer niche). Don’t miss the opportunity to climb the Giralda Tower for sweeping views of Córdoba.

With its rich history and unique architecture, the Mezquita is sure to be a highlight of your trip to Cordoba.

The Alcázar de los Reyes Cristianos, also known as the Alcázar of Córdoba, is one of the primary things to visit in Córdoba, Spain.

The medieval alcázar is located next to the Guadalquivir River and near the Mosque-Cathedral. The fortress served as one of the primary residences of Isabella I of Castile and Ferdinand II of Aragon.

With its beautiful architecture and historical significance, the Alcázar is definitely one of the places you don’t want to miss while in Córdoba.

Located in the historic center of Córdoba, the Casa de Sefarad is one of the must-see attractions for anyone interested in the city’s Jewish heritage.

The museum offers a wide range of exhibits on the history and culture of the Jews in Spain, from the Roman period to the present day.

Visitors can learn about the everyday lives of Jewish people in Córdoba, see ancient manuscripts and artifacts, and even enjoy a traditional Sephardic meal.

The Casa de Sefarad is an essential stop for anyone wanting to understand the rich history of this multicultural city.

Córdoba Synagogue is one of the things to see in Córdoba, Spain. The synagogue’s small size points to it having possibly been the private synagogue of a wealthy man.

It is also possible that Córdoba’s complex of buildings was a yeshivah, kollel, or study hall. Today, the synagogue is a popular tourist destination, and its rich history and beautiful architecture are sure to impress visitors from all over the world.

Madinat al-Zahra, also known as Medina Azahara, is one of the most important archaeological sites in Spain. Located on the outskirts of Córdoba, it was built in the 10th century by Abd-ar-Rahman III, the first Umayyad caliph of Al-Andalus.

The city was designed as a luxurious palace-city, and its remains are a fascinating glimpse into Andalusian life during the height of the caliphate.

Today, Madinat al-Zahra is one of the most popular tourist destinations in Córdoba, and it is well worth a visit for anyone interested in Spanish history and culture.

Try one of the foods Cordoba is famous for

If you’re staying for launch or dinner, one of the things you want to do is try some nice food in Córdoba. Famous for its Moorish archaeological sites, the city is also known for its food.

Whether you’re looking for a quick snack or a sit-down meal, you’re sure to find something to your liking in Córdoba. It’s definitely worth visiting Córdoba, Spain. It has plenty more to offer the curious traveler in search of history, architecture, and food.

46 thoughts on “Visiting the Museum of the Inquisition in Cordoba”