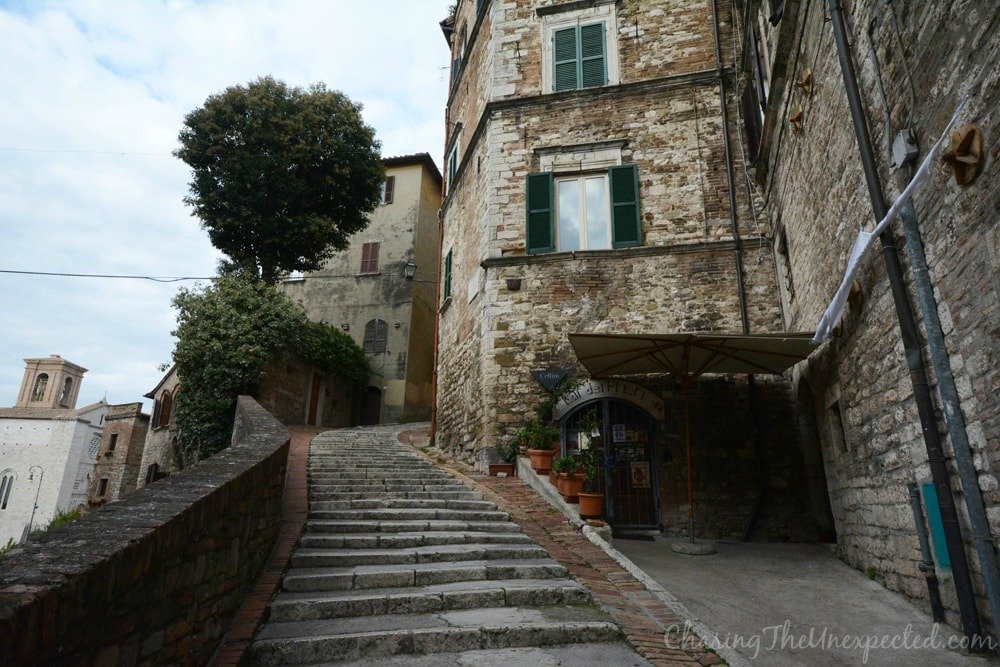 They wandered to and fro, accordingly, and lost themselves among the strange, precipitate passages, which, in Perugia, are called streets, Some of them are like caverns, being arched all over, and plunging down abruptly towards an unknown darkness; which, when you have fathomed its depths, admits you to a daylight that you scarcely hoped to behold again. Here they met shabby men, and the careworn wives and mothers of the people, some of whom guided children in leading strings through those dim and antique thoroughfares, where a hundred generations had passed before the little feet of to-day began to tread them. Thence they climbed upward again, and came to the level plateau, on the summit of the hill, where are situated the grand piazza and the principal public edifices.

Unlike Rome, that deprives us from finding the traces of its medieval past, Perugia, beautiful town in Umbria region, is fully committed in making up for the capital’s shortcoming.

An endless maze of winding staircases, medieval gates and decorated arches, Perugia welcomes its visitors with the confident aplomb of an old actress used to be admired and cherished.

Home to hundreds of students from all over the world who enrolled in the city’s university for foreigners, Perugia has never made it easy for residents and tourists to amble about its lanes and back streets. This, however, is the best way to unearth and delve into the city’s most hidden soul and truest identity. Into the “unknown darkness” Hawthorne described almost 150 years ago, even.

Traditional tourism will take you to the most important historical and artistic landmarks showing you the main things to do in Perugia, such as visiting the 13th-century Fontana Maggiore in the middle of Piazza IV Novembre, the wonderful San Lorenzo cathedral or Umbria’s National Gallery for a glimpse of the region’s artistic heritage.

For the gluttonous, fret not, Perugia is chocolate town, and once a year, every Fall, they celebrate their love for the precious beans with a proper festival and international exhibition, EuroChocolate, when the city crackles with the same vitality Hawthorne himself recalled on ordinary market days:

Crowded as the square was, a juggler found room to spread out a white cloth upon the pavement, and cover it with cups, plates, balls, cards, w the whole material of his magic, in short,—wherewith he proceeded to work miracles under the noonday sun. An organ grinder at one point, and a clarion and a flute at another, accomplished what their could towards filling the wide space with tuneful noise, Their small uproar, however, was nearly drowned by the multitudinous voices of the people, bargaining, quarrelling, laughing, and babbling copiously at random; for the briskness of the mountain atmosphere, or some other cause, made everybody so loquacious, that more words were wasted in Perugia on this one market day, than the noisiest piazza of Rome would utter in a month.

Other than that, Perugia is very quiet.

On a normal day, in fact, the town evokes calm and silence, and despite its 165.000 residents, it has never lost its original charm of country village.

I had been warned repeatedly about the staircases and free gym benefits that come with them, and after having been there, I can state pretty safely that if you are in a hurry, Perugia is not for you. A maze of tangled alleys that look pretty much all similar, for sure won’t fail to whirl you back in time, but trust me on this, won’t fail to get you lost either. Over and over again.

All the modernity of central Corso Vannucci notwithstanding, Perugia medieval city wins over all.

Maybe because the town is not huge, at least not the districts tourists are usually interested in, you might feel confident enough to wander by yourself without a local guide, with no Perugia map in your hands, even. Do it and you’ll feel just like H.A. Taine felt in the end of the 19th century when he wrote his Voyage on Italie:

Wandering through these complicated, steep, humpy streets, through these precipitous galleries, with their loose bricks, crossed by curbs to slow down the feet, amidst these strange buildings…

Admittedly, I look, and a I write, from a privileged point of view. I have a sister who’s been living there for more than a decade and yet this was my first time up and down the cobbled streets that little have changed since the Middle Ages. Untethered to space and time, Perugia defies all laws of progress and modernity, and through its brick walls, majestic archways and tile rooftops, today’s travelers will be likely to have the same experience their 19th-century predecessors had almost 200 years ago.

To make sure this Umbrian town keeps preserving the deep faith it has always shown, the 14th-century borgo is a true cluster of monasteries, churches founded on the ruins of ancient temples, a plethora of religious symbols and references. For as small as it is, Perugia’s historic center gathers Etruscan reminiscences, evidence of a Roman past and Gothic features spread out from north to south.

As it happens when strong kingdoms compete with each other, also Perugia, alongside nearby cities of the likes of Todi, Ancona, Urbino, Gubbio and a bunch of others, was often in the middle of battles and struggles for power. With independence at times earned at times lost, in 1816 it finally acquired the status of administrative department of the Holy See, confirming once again its strong affinity with the fate of Christianity in Italy.

A collection of intriguing figures throughout the centuries, nuns and friars belonging to different orders, artists, scientists and noble families contributed in shaping a lively atmosphere that now translates into an intoxicating experience for the perceptive observer.

The hidden passageways, closed arches and dark alleys still resonate with the secrets that such a devout city tries to conceal to modern visitors. Arm yourself with comfortable shoes and set off for a great adventure through history in what seems only to inexperienced eyes an innocent town perched on soft rolling hills.

From Rome, you can easily reach Perugia by taking the train at Termini Station and changing in Foligno. For more information on tickets, bookings, timetable and prices, you can check directly Trenitalia website.