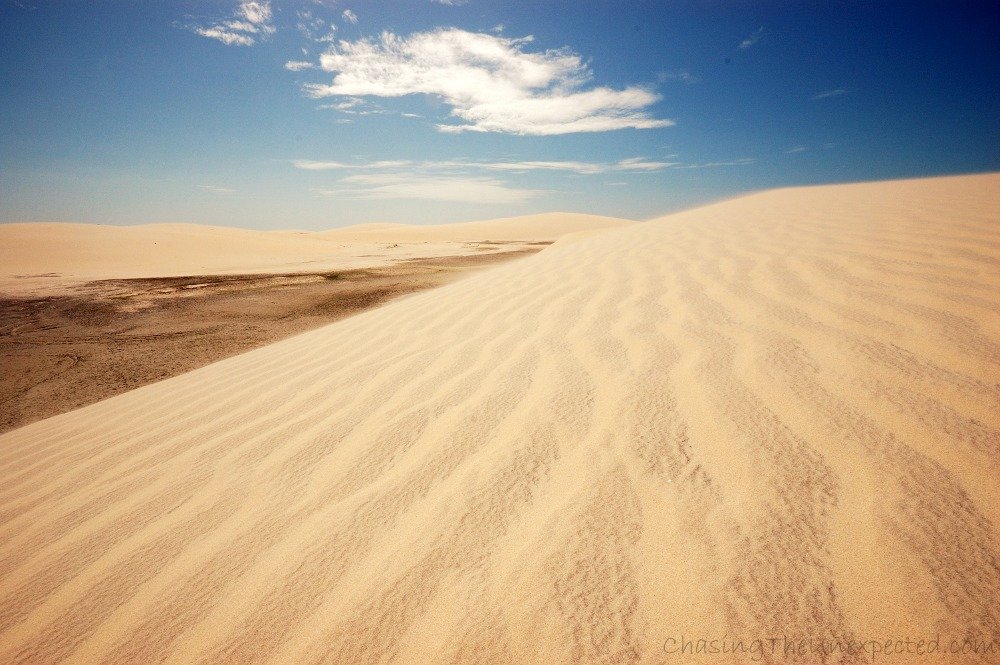 In Brazil, natural wonders are literally around every corner. While visiting the northern state of Ceara, I enjoyed a tour around the coastline of its capital, Fortaleza. Few words can describe the awe you feel when staring at the views of Jericoacoara, a hippie-like resort at about 300 km from the city.

Wherever I watched, be it a dune in the desert or a grotto on the beach, the scenery was overwhelming, and probably my pictures won’t do the least justice to the beautiful Jericoacoara.

The first time I tried to pronounce tongue-twistingly named Jericoacoara the result was hilarious. Jericococora, Jericocoara, Jeri-something, Jerico-what?… I believe the same applies to every foreign tourist, and we were a lot. This is maybe why most used to call it just Jeri.

When I went to Jericoacoara (Jeri for friends) I had already visited the beaches of Morro Branco and Canoa Quebrada a few days before, so I thought I knew what to expect. However, as soon as I settled in my hotel and went for an evening walk around the city I immediately had the impression I just entered a world apart.

The town of Jeri is inside a national park where territory, flora and fauna are protected. Natives’ main income comes undoubtedly from tourism, although fishing is also a great resource of their economy.

The main shades of its landscape are white and blue. The white of its sandy beaches and massive dunes, the green-blue of its amazing waters and some hammocks scattered here and there complete the perfect tropical scene.

A terrestrial paradise where giant dunes sit just beside cosy lagoons and where colorful kite-surfing boards dot the huge waves hitting against the untarnished shores. A spellbinding mix of desert, green forests, beaches, bays and crystal waters forms the overwhelming variety of views that consciously pose for cameras, artists or just tourists in awe.

The bus from Fortaleza dropped us at a rest stop in Jijoca, about half an hour drive from Jericoacoara. We arrived at destination just before sunset, on time to go see Pedra Furada, spectacular rock formation half way between a grotto and a gallery lying on the shore. On a very personal note, I arrived in Jeri with a back pain that was literally making me walk bent over, so when I saw the route we were asked to do I almost fainted: uphill along a cobbled field followed by a rock-strewn path downhill towards the beach.

On the way back to Jericoacoara, we were to embark on a “much easier trail”, according to our local guide (who, by the way, came all the way carrying a huge fridge-box full of water, coconuts, coke and all possible drinks for us): a steep slope clothed with rolling stones. Once on top, a gust of wind (there’s always a strong wind, reason why the area is a fave for kite and wind surfers) literally threw me to the ground, gust that I felt all along my spine like a lash. And all this, wearing my flip flops after locals’ suggestion that sneakers were not necessary, probably due to the fact that natives are more used than me to such unfriendly walks. Final result, when I got back to the hotel the back pain was gone.

The day after, we were out to enjoy Jericoacoara’s views by buggy, boat, swimming and walking, and although I loved every experience, I couldn’t avoid noticing that maybe too many cars and 4×4 were allowed in the beaches. And right when we were ravished, and a little jealous, by how blessed locals were by Mother Nature, we reached Nova Tatajuba (New Tatajuba), small desert town sitting in the very middle of probably all paradisiac features of the park, which is “new” because Velha Tatajuba (Old Tatajuba) got run over and destroyed by a massive moving dune. And like in Pompeii, Italy, where locals steadily refuse to leave their home before volcano Vesuvio destroys the town all over again in one of his bursts of lava, smoke and ashes, Tatajuba inhabitants are determined to stay there, in the new version of their original village, just beside another moving dune and making tourists’ visits more colorful with the tale of their misadventure.

Due to the abundance of seafood, our meals were mainly based on lobster, shrimps and fish, and although lately I’ve been adopting a vegetarian diet whenever I can, I managed to get fish-free dishes only a couple of times, once a great salad with veggies mixed with fruits, once the typical bean and rice-based Baião de Dois and once a delicious tapioca filled with cheese, tomato and oregano.

Jericoacoara town itself is quite big and roads are not paved. With cows, donkeys, cats and dogs freely wandering around I felt a bit as if I was in India. The city center is very tourist-focused, restaurants, hotels and souvenir shops line up the streets, while locals’ homes are around it.

With a laptop and an internet connection I wouldn’t mind at all living there with some donkey peeping through my window from time to time. The vibe was beautifully laid-back, and although an article deadline was dangerously approaching, I managed to let the wind swing my hammock, nevertheless.

During our tours I had the chance to see many houses were on sale, and the place is quickly becoming a favorite for foreigners, mainly Europeans, from Italians to Portuguese, looking into either making Jericoacoara their paradise retirement spot or changing their life by opening a new business there, be it a pousada (small hotel) or a kitesurfing course, one of the attractions why Jeri is famous for.

Certainly, as of now the prices are still very affordable if compared to Europe. Hopefully this is not a bubble, but just in case, if you are into a life change, you might want to enquire sooner rather than later.