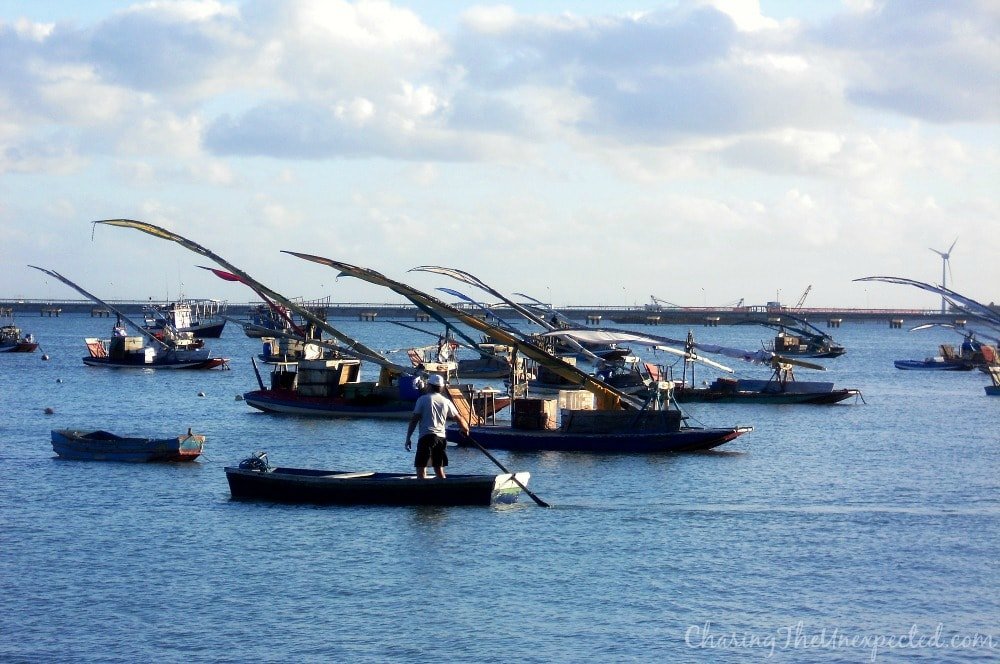 “Abacaxi, óleo de coco, camarão, lagosta!” Pineapple, coconut oil, grilled shrimps, lobster. These the main products offered by the noisy and familiar street vendors populating Brazilian beaches and exploring Fortaleza you are bound to experience that. Everything about them seemed to shout, their colorful hat, their dancing-like allure under the unforgiving sun and their broad smile.

The first time I landed in Brazil was 1992, and Rio de Janeiro was a poverty-stricken, yet hypnotically beautiful metropolis. Every time I came in the past twenty years, the powerful winds of an unrelenting development have been blowing stronger by the minute up to now that the country has earned a place among the world’s new superpowers.

While sun-drenched Fortaleza, capital of the state of Ceará, hasn’t reached Rio de Janeiro’s seductive charisma yet, it is nevertheless quickly becoming the new favorite destination among Europeans and in-the-know travelers who want to unearth the soul of the northeastern part of the country.

Known among Brazilians as the City of Light, exploring Fortaleza will make visitors soak in its tribal past while surrounded by all comforts modernity ensures.

In 1500, when Spanish conquistador Vicente Yáñez Pinzón landed on the city’s Praia Mucuripe, this beach was little more than a simple piece of coastline, now become the dock where fishermen moor their jangadas (traditional fishing boats still in use) every morning at 5 am, after a whole night of fishing adventures off the Atlantic shores, to hoist the sails once again in the afternoon. A sea full of fish, the blessing of more than 300 sunny days per year and a dream-like stretch of white sand conspired to make this once untouched sweep a busy daily market where fishermen sell their catch directly to a crowd of eager customers who flock no later than 6 am to make sure they still find a wide choice.

Exploring Fortaleza you will meet African and tribal flavors

With its nearly 600 km of coast, the cuisine of Ceará is heavily based on fish, seafood and all products coming from the Atlantic Ocean, and when restaurants’ menus are not entirely devoted to shrimps, lobsters and sirigado fish, seafood makes at least for half of their list. The array of seafood-based gastronomic traditions is wide and diverse, and no restaurant would dare opening its doors with a menu lacking options such as moqueca de arraia, where ray fish is deliciously stewed in a sauce made with coconut milk, tomato, onions, coriander and a clear orange palm tree oil locally called azeite de dendê, or the popular baião-de-dois, dish from desert areas featuring rice, beans, butter and fresh cheese. As a weekly ritual, every Thursday takes place the caranguejada, and locals gather in different restaurants or beach stalls to eat crabs in different sauces and recipes.

The African origins of the moqueca, enriched by flavors introduced by the slaves in colonial times and much retained by present cuisine, beautifully blend with indigenous Brazilian food tradition that boasts a great consumption of native tropical plants. This combination of races and ethnic groups, inevitably influenced also by European features brought by navigators from the Old Continent since the 16th century, results in a fascinating gastronomic heritage.

Although lunch time is conventionally around 1 pm, the sweet smell of widely used coconut milk and the fragrance of cassava flour in all its forms are released already late morning on main and side streets by churrascarias and restaurants such as the famed Colher de Pau or Rei dos Mares in residential area Meireles, overlooking the beautiful Beira Mar promenade. Exploring Fortaleza this will be a recurrent feature.

The cassava, or manioca, woody shrub with an edible root, was considered the typical food of the poor due to its ability to resist lengthy periods of drought and grow in hard conditions, but, as it happens, it has become with time a specialty cherished by locals and tourists alike. Boiled, deep-fried, prepared as seasoned flour called farofa or in the form of ever-present tapioca, today manioc is, in a way or the other, an ingredient in most meals thanks to its precious properties of abundance in calcium, vitamins B and C, and essential minerals.

Tapioca, widely present in all of the Northeast and belonging to the diet of Tupi-Guarani indigenous tribes, is best consumed in two cities, Olinda, in Pernambuco state, and Fortaleza. After sieving manioc starch, water and a dash of salt, a layer of this mixture is laid on a hot frying pan in order for the heat to cause the starch to gel and become slightly chewy. Typical for breakfast, it’s delicious lightly soaked in coconut milk and eaten with a variety of toppings such as queijo coalho (curd cheese), goiabada (guava marmalade) or banana. When eaten for lunch or dinner, a very traditional filling is carne de sol, shredded sun-dried meat typical of Ceará.

The huge array of fillings and toppings for tapioca makes it for a perfect meal for fish and meat lovers as well as vegetarians. The best places to enjoy the local treat are the Centro das Tapioqueiras, in Avenida Washington Soares, where more than twenty local women make a very traditional tapioca, and Coco Bambu, rustic eatery entirely built with bamboo where orders are delivered by Indiana Jones-style waiters.

Tapioca, like many manioc-based recipes in northeastern culinary culture, is an important legacy from indigenous Brazilians, of which today persist at least fifty tribes, mainly in the Amazon, that have never experienced any contact with early European pioneers nor later immigrants. Where such contact has taken place, the blend of different traditions with the inevitable prominence of native culture has engendered an utterly captivating folklore.

Indigenous philosophy heavily relies on what Mother Nature has blessed the land with and uses plants as food and medicine, making it the foundation of a culture that never fails to dazzle visitors thanks to its unique character of connecting modernity with ancient civilizations still alive.

Despite a stormy past of colonization and a not-so-remote history of poverty and shaky governments, Brazil’s timeless appeal is in large part due to its population’s kindness, spontaneous generosity and an unfailing festive spirit.

Arts and crafts you will see exploring Fortaleza

Along with a culinary art that combines ancient with modern, northeastern state of Ceará also boasts a tradition of art and handicraft that blends tribal features with a contemporary twist. The best place to get to know the native craft while exploring Fortaleza is Centro do Turismo, in Rua Senador Pompeu 350, where a lovely exhibition of ancient working tools and local artwork can be appreciated in former public prison, built in 1850 and turned into a tourist center in 1973. Meandering about the different floors and rooms of this old jail, where every cell could house between twelve and twenty prisoners, made me feel as if I was stepping back in a time when very likely I wouldn’t have enjoyed the country as much as I do now, sentiment that permeates the air as soon as a visitor steps over the threshold of this big, white colonial building. Today cells have replaced their public stint with the more enjoyable duty of showing and selling local textile handicraft, finely embroidered t-shirts, tablecloths, dresses, purses and all kinds of everyday object.

Still pervaded by the mixed feeling of curiosity to learn more about the city’s difficult past and fear of doing so, I decided I wanted to dig deeper into local craft, and, when asked, a taxi driver whisked me directly to the Mercado Central, central market, three-story building with more than 500 stalls selling all sorts of locally-made products, from leather bags to colorful bikinis to tablecloths made with coconut fiber. Widely available here picturesque bottles of world famous sugar cane-based liqueur cachaça packaged with pickled crabs or fruits inside, almost as if representing the city’s symbols. Sugar cane is used to make also other products such as the rapadura, very sweet delicacy typical of northeastern areas made by smashing, boiling, shaping and drying the cane’s juice.

Mainly geared to tourists, in these stalls is still possible to bargain the price, although, effect of a booming economy, don’t expect unbending shopkeepers to go down too much.

You can’t say you have fully enjoyed exploring Fortaleza and felt its inner spirit if you haven’t sipped from a fresh coconut swinging on a hammock by the sea. You can as well gape at the sun setting on the turquoise horizon beyond the swaddling clouds on its way to light up the opposite side of the planet in the wait for your night to start, right here on beautiful Beira Mar beach, where local artisans have already set up their stalls in what is known as the evening handicraft fair. It might be thanks to the endearing atmosphere provided by the rudimentary lights flitting in the dark around the handmade products, but the same goods seen earlier at the Mercado Central didn’t quite fit the stereotype of tropical society as much as they do now.

Making my way through the stalls of this local market strung out along the coastline and festooned with all kinds of artifacts, and forking out some good cash at the irresistible sight of colorful jewelry and somber tribal masks, is the perfect way to round off a long but rewarding day spent exploring museums and tucking into local delicacies in this thriving city dominating Brazilian northern coast.

Brazil crime rate is notoriously high, so when traveling there you need to pay extra attention to some safety rules. To avoid getting mugged in Fortaleza and any other city in Brazil, instead of carrying a purse or visible wallet, wear loss- and pickpocket-proof travel clothes. They are made with secret and secure pockets where you can keep money or any small object you need to carry with you such as cash, mobile phone, credit card, house keys, etc.
Click here for more information on the types of safety clothes available and the latest prices.