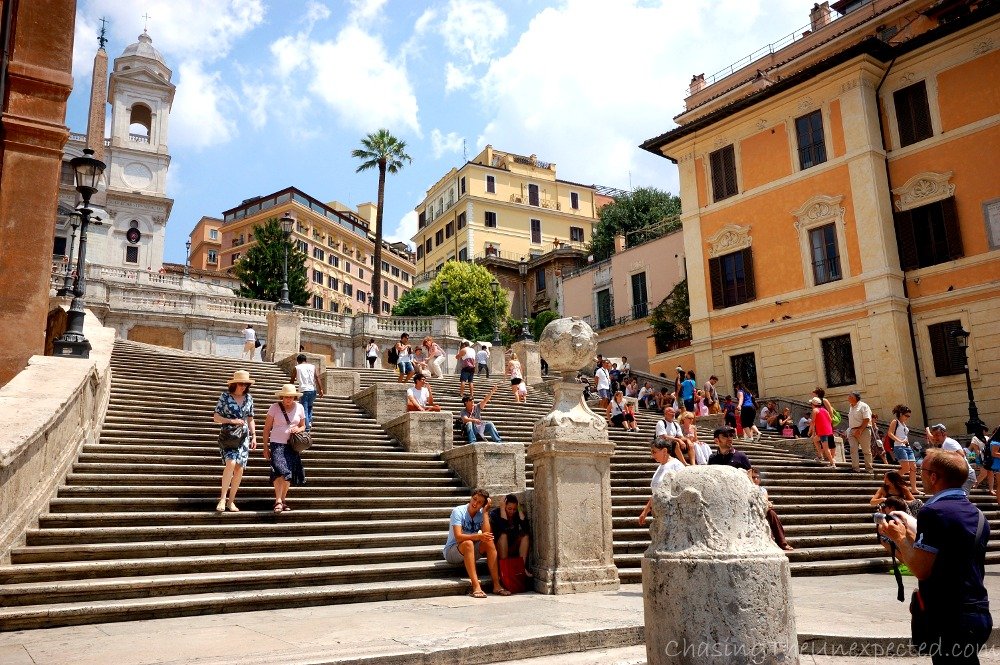 So you are planning a 2-week Italy itinerary and spending some 4 days in Rome. So huge and eternal that picking what not to miss in your first trip is overwhelming. Yet, there are some places that you will visit even if you don’t plan it. The Spanish Steps is one of these landmarks. Central, famous, the typical postcard place you will end up visiting for sure.

Surrounded by landmarks and strategically located close to many other Rome attractions, the Spanish Steps and nearby Piazza di Spagna are a must for anyone who’s exploring the city for the first time. Keep on reading to find out what is all the fuss about, what to do around the Spanish and some tips on how to enjoy your visit.

What are the Spanish Steps in Rome?

Built between 1723 and 1726 from a project of Roman architect Francesco De Sanctis, the stairwell is actually called Scalinata di Trinità dei Monti and the square at the bottom is Piazza di Spagna, “Spanish Square”. This impressive staircase is the connection between the slopes of the Pincio hill with Piazza di Spagna. On top of the stairs is the Trinità dei Monti church, one of the five French Catholic churches in Rome.

The project to build the Spanish Steps was initially funded with a donation from the French Etienne Gueffier in 1660. One of the projects came from the workshop of the great Italian architect Gian Lorenzo Bernini, and even though it was realized only years later, their project proved to be essential for its suggestion of how to build the walls and the ramps.

What is to see near the Spanish Steps?

One of the top sights to visit in Rome, in the less busy seasons, you might find some quiet moments to enjoy the Spanish Steps around lunchtime. But the best time to visit is certainly early morning before the crowds start flocking.

Recently, the local Council has banned sitting on the Spanish Steps. I welcomed this decision as too many people mistakenly confused an important historical landmark with a cluster of benches where to eat, drink and relax. Now, we can finally admire the architectural majesty of this construction. Its typical Baroque architecture makes its scenic effects increase the closer you get thanks to an interplay of perspectives and backgrounds.

Some of the landmarks to visit near the Spanish Steps are:

How to enjoy your visit to the Spanish Steps

While it’s pretty hard to find a quiet spot in the eternal city, there are some tricks you can follow to enjoy also the busiest attractions, such as the Spanish Steps. Here are some suggestions to better enjoy your visit to this historical Rome landmark:

How to get to the Spanish Steps

Reaching the Spanish Steps is pretty easy. You can easily reach by metro, line A, Piazza di Spagna station, and from there it’s really minutes of walk to the square at the bottom of the steps.

If you prefer to arrive from the top, bus 119 reaches near Piazza della Trinità dei Monti. Also, from the metro station, you can follow the sign towards Villa Borghese and the escalator or lift will take on top of the Spanish Steps.

READ MORE: You are not sure where to eat in Rome? Check out our guide to the best Rome restaurants!

SAVE IT FOR LATER? PIN IT TO YOUR BOARD!