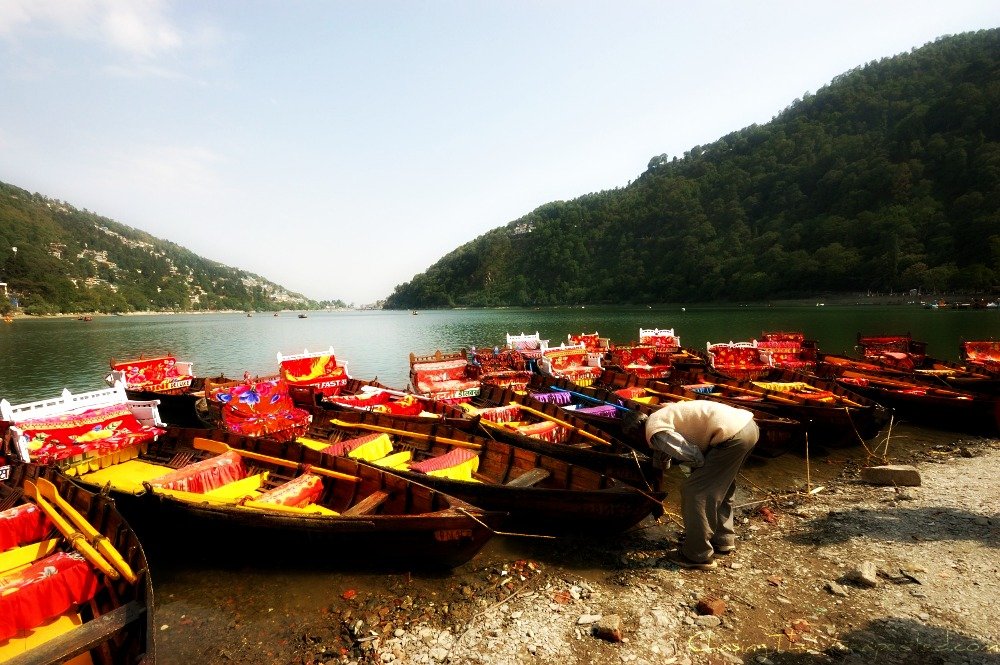 One of the prettiest cities I’ve visited in Uttarakhand and a great destination if you are traveling to India in December, Nainital, in the Kumaon region, is famous for its beautiful lakes and picturesque surroundings.

Blessed by the presence of nine lakes that make for a truly breathtaking natural landscape, Nainital is one of the most touristy places in this Himalayan region in northern India.

As I was traveling throughout the region and since I love taking photos wherever there is water, I decided to devote one day to Nainital and enjoy the natural scenery of at least one of its many lakes.

Now, being India, could it be just a normal lake? Let’s get on.

In order to fully enjoy the large expanse of open water on Naini Lake, I went on a boat trip, and this is when the captain of the most colorful and shakiest boat I’ve ever taken started telling me the story of the city.

Like the rest of the country, also Nainital was occupied by the British during their colonization that lasted for almost 200 years, until 1947 when Hindustan was divided into two countries, India and Pakistan, a division that provoked endless massacres and ongoing deterioration of Hindu-Muslim relations, and India declared its independence.

According to the boat captain, when the British settlements were dismantled and rulers were leaving Nainital, all their possessions were dropped in the lake, and now, apparently, everything lies on the bottom, making for an invaluable historical and cultural heritage.

Although I’m a good swimmer, I decided to avoid confirming this by plunging into the water, and not just by its unusual very green color, but also because it did seem considerably deep.

This was the “real-life” story, but, again, being India, I expected more. And I wasn’t disappointed.

The word Nainital can be divided into two words, naini, which in Hindi means “eyes”, and tal, which means “lake”, and it comes from a legend that sees as main characters the Hindu god Shiva, Destroyer of the Universe, and his wife, Parvati.

As the story goes, Parwati, daughter of King Daksha, held a “Yajna”, that in Hinduism should be a ritual for sacrifice, without inviting Parvati (or Sati) and Lord Shiva. Parvati could not bear the insult and furious she crashed into the “Yajna” ground, leaping into the flames and burning to death.

While Lord Shiva was carrying his wife’s dead body to Kailesh Parvat, Parvati’s eyes fell into the lake, and this is why the city was then called Nainital.

Apart from being beautiful, Nainital is also very touristy, and as such not really the best place for shopping, not just for the prices that somehow reach unreasonable levels, but for the actual quality of the products.

I’m particularly referring to the pashminas I saw just on the main road facing the river that was certainly not as good as in other less touristy places. Besides, since I wanted to buy only one, they wouldn’t even let me go inside to choose the color I liked, but I had to pick among those they had put on display, only a couple and the worst ones.

Although I tend to avoid very touristy places and indulge in some lesser-known spots, I did like the vibe I sensed in Nainital. This is why it’s not unlikely that one day I will go back.

If you’re thinking of visiting this beautiful place, here are some tips to help make your trip enjoyable. First, make sure to pack appropriately for the weather – the area can be quite cold in winter and at the beginning of the spring. In summer and summer and monsoon seasons, it’s hot but probably not as hot as Delhi. For more information related to the weather, read my article on the best time to visit India.

Next, be prepared for a lot of walking; there are many hills and trails to explore in the area. Finally, bring enough cash with you; while there are some places that do accept credit cards, others don’t so it’s best to be prepared. Have a great time on your trip to Naini Lake!

Also, you may want to read my guide on how to avoid getting sick in India as well as things not to do when you are visiting India.

Is Naini Lake open every day to visit?

Naini Lake is a beautiful body of water located in the town of Nainital in Uttarakhand, India. Surrounded by hills, the lake is a popular spot for tourists and locals alike. Visitors can take a boat ride around the lake, go for a swim, or simply enjoy the scenery. The lake is open for tourists from 6:00 am to 6:00 pm on all days of the week.

Is Naini lake free to visit?

Can we swim in Naini Lake?

No, it is not advisable to do so. Naini Lake is a freshwater lake in the state of Uttarakhand, India. The water of the lake is considered sacred by the Hindus and no one is allowed to swim in it.

Despite the fact that swimming is prohibited, there are people who swim on the edge in the heat of summer. But it is highly discouraged because there are no lifeguards present and the water is very deep.

Moreover, the water of the lake often turns muddy and murky making it difficult to see what’s beneath the surface. So while you might be allowed to swim in Naini Lake if you choose to do so, it’s not advised.

Where is the famous Naini Lake located?

The Naini Lake is a natural freshwater body located in the town of Nainital, in the Indian state of Uttarakhand.

It’s about 2,000 meters (around 6500 feet) above sea level and is one of the highest lakes in India. The lake is a popular tourist destination and is surrounded by hills and forests.

The Naina peak is located about 10 km from the Mallital area of the Mall Road Nainital and about 10 miles away from the Tallital Bus Stand Nainital.

How deep is the Naini Lake?

Naini lake is approximately 30 meters (100 feet) deep. It is surrounded by seven hills which make it appear as if it were in a valley. It acts as a rep-attending reservoir for the Kumaon Hills and supplies water to much of central and northern India.

Who made Naini Lake?

In the Pahadi folklore, it is said to be the abode of the goddess Narayani Devi. The lake was created by the god Shiva for his three thirsty devotees – Atri, Pulatsya and Ulaha.

Naini lake’s agony began in March 1839, when its divinity was sought to be swept out. The British Raj had begun constructing a road through the Naini valley and started to cut the trees near the lake.

How many lakes are in Nainital?

Nainital is a beautiful hill station in Uttarakhand, and it is home to seven lovely lakes. They include; Bhimtal, Sattal, Naukuchiatal, Khurpatal, Malwatal, Harishtal and Nainital.

Bhimtal is the biggest one and Sattal is the most beautiful and least visited. All of these lakes are surrounded by lush greenery and offer stunning views.

Naini lake is the most popular one, and it is situated in the middle of Nainital town. It is a beautiful sight, and it offers boating and fishing experiences.

Bhimtal lake is the biggest one, and it offers a range of water sports activities. Sattal lake is the most beautiful, and it is located in a secluded area. It is a great place to unwind and relax. These seven lakes are definitely worth visiting when you are in Nainital.

Naini lake is a natural freshwater body located in the township of Nainital in Uttarakhand at an altitude of 6,358 feet. The depth of the lake begins at 6 meters and goes up to 28 meters and covers a perimeter of 2 miles.

Naini lake is one of the Lakes of Kumaon hills and is fed by springs emerging from the surrounding hills. Naini lake is a popular tourist destination and is surrounded by Nainital town on three sides.

Overall Nainital provides a much-needed refreshing break from the hectic city life and should definitely be on your list for a perfect getaway!

How long is Nainital Lake?

Nainital Lake is about 0.87 miles (1.4 kilometers) long. It is located in the city of Nainital, in the Indian state of Uttarakhand. The lake was created by a meteor impact and is surrounded by hills and forests.