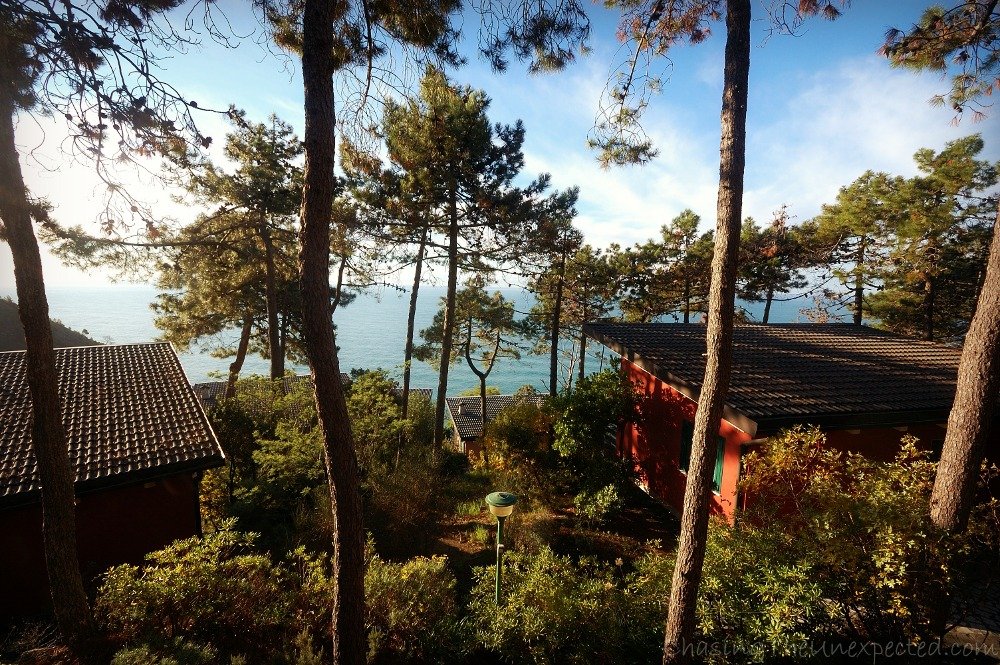 During my stay in Liguria, for two nights I stayed at La Francesca, a resort village with its own story and personality. “Francesca” in Italian is a given name for women, so my first thought was that the village was named after a woman, maybe the wife of who built it. Definitely wrong guess. Although the full explanation of the origins of this name is still a mystery, there is some thorough research that has tried to give an answer to this question.

Via Francigena, passing through La Francesca, was an important arterial road that eased the communication and the connection between northern and southern Europe, an ancient Roman road used by pilgrims to go to the Holy Land and necessary Templars to protect their journey. Walking, by horse, alone or in a group, pilgrims from France and Spain went past this road to get to Levanto and from there, board on the ship towards Rome, going through dangers and struggles in order to obtain grace.

The name “La Francesca” was not coined in recent times, in fact, its toponym appeared already in the local chronicles dating back to 1584 and in the cartography of topographer Matteo Vinzoni in 1722. This was also the road traveled by Julius Ceasar nonetheless on his way to the Gaul, ancient France, and from the ninth century, the street that connected Italy to France has been named “Francesca”.

After serving different purposes and belonging to many different owners, today La Francesca hosts, in its territory of about 15 hectares, 55 holiday apartments, a restaurant, a cafeteria, a mini-market, a tennis court, a soccer field, a swimming pool and countless natural trails for who wants to discover beautiful local biodiversity that boasts precious plants such as oregano, thyme, juniper tree, lavender and even orchids. It also depends on the area though, because La Francesca is so wide that even its flora varies, and uphill it’s possible to find evergreen shrubs such as broom, mastic tree (Pistacia Lentiscus), rosemary, myrtle, Arbutus unedo, commonly known as the strawberry tree, Rhamnus alaternus (or Italian buckthorn) and erica arborea, commonly called tree heath.

In 1999 a terrible fire devastated the area, destroying 400 hectares of the local forest and heavily damaging also La Francesca. After the fire was extinguished, the owners received many offers from people who wanted to buy it. “They promised they would have built a spectacular resort village, where people wouldn’t even have been able to understand whether they were in Italy, Dubai, or Egypt.” Told me Marco, journalist, and filmmaker, owner together with his wife Giovanna, photographer and filmmaker, of La Francesca. “How could we allow this?” He went on. “Biodiversity is La Francesca‘s real treasure.”

This is mainly how it all got started, after the fire Giovanna and Marco rolled up their sleeves and built up a resort for tourists, visitors, honeymooners, families, weddings and locals who wanted to escape routine for a while, literally: from within you can’t see anything of the outside world, except from the azure sea and, in clear days, Monviso mountain and Corsica, and from outside you can’t even spot the village, located as it is in a wide valley.

Apart from the emotional bond that Marco has towards the place his own mother bought (in a time span of 4 years from 32 previous owners!) and spruced up, now he likes dawdling about the alleys and cobbled Roman trails and indulging in memories of when he was a child and made his very first trip to La Francesca, in eight hours drive from Milan, through narrow streets where only a vehicle per time could go past, and overcoming winding roads and wild lands.

Unfortunately, I only stayed two days, so apart from walking around the huge park, I couldn’t properly enjoy what La Francesca has to offer. If I had the chance to stay longer, what would I have done? For a start, I would have gone to one of the local markets either in neighboring Levanto or Bonassola, or even spoiled myself grocery shopping at the reputed Cinque Terre, and cooked my own meals at the kitchenette in my apartment using possibly all season local produce the region of Liguria is famous for. I would have very likely enjoyed my meal on my balcony and had a walk afterward, probably taking pictures or just wandering in the plain lazy mood and slow motion such ambiance inspires.

I would have meandered through the natural paths to discover the different plants and also to see its unusual sites, such as six copper mines that give the place a true historical value. Apart from its cultural and sacred value, copper is a mineral precious for a healthy existence that enables metabolic process together with amino acids and vitamins, protecting cells and stimulating nervous and cardiovascular systems. Copper mines are not the only ones present at La Francesca, which boasts also sources of marble, gold, and serpentine rocks probably dating back to the Upper Jurassic, between 180 and 70 million years ago, when a deep cut of the crustal plate allowed the basic magma to leak out.

Many activities can be done here, and while this is a good thing, it’s also a drawback: the chilled out holiday do-nothingness might easily make you want to stay in the whole time, which, in Liguria, within a stone’s throw away from the Cinque Terre, would be a big shame.

Click here for more information and the latest prices for Resort La Francesca.