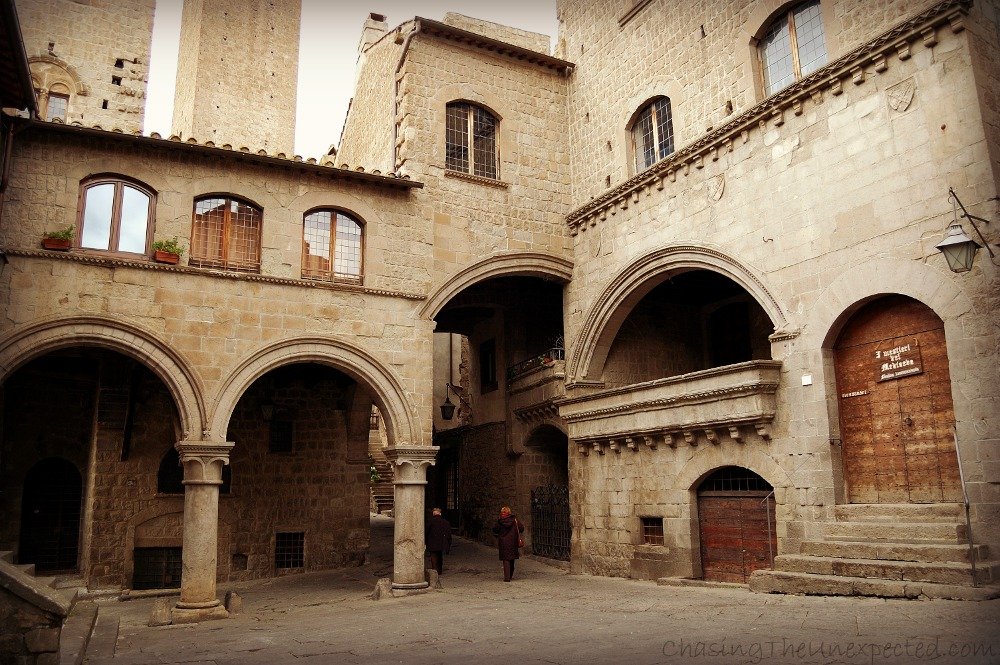 Devoting an entire day to Viterbo, Italy, beautiful and mysterious city about 80 km from Rome is an experience everyone traveling to the capital should make at least once.

Steeped in history and folktales, Viterbo is the City of Popes.

Hardly one of those cities you stumble on naturally, for Viterbo you need a proper plan, and although not very touristy, I guarantee you will hardly forget your visit.

With the train from Rome, I got off at Viterbo’s Porta Romana station and, although I had never been there before I didn’t feel the need to look at the map.

Viterbo city planning, in fact, is pretty straightforward. As soon as you leave the train station you will immediately find yourself facing the circular, crenellated, ell-encompassing medieval walls that frame the city center that you will reach by stepping over one of the ancient gates that welcome you into a yesteryear atmosphere.

The moment you straddle the threshold you will notice the difference between the “in” and the “out” of the walls. Outside is a hectic modern city, with buses, cars and motorbikes hurtling back and forth Italian style, while inside the walls you will experience a quiet medieval town where you wouldn’t find odd at all if you saw chariots carrying brocade-clad ladies.

Viterbo is considered “Rome’s sister” in that it has been a papal city during the Middle Ages. Along with Popes, confraternities, brotherhoods and other religious institutions naturally come mysteries, untold customs, hidden stories, struggles for freedom and esotericism.

Widely known as “the Popes’ town”, Viterbo stubbornly maintains the marks of those days, conveying a sense of lost luxury and a gloominess. However, although the city is popular for being home to popes and monastic orders, long before that it was a great Etruscan built-up center, founded by this pre-Roman civilization which, according to historians, originated from Lydia, namely ancient Anatolia.

As I’ve had the occasion to write when I visited Veio, despite their huge historical importance, Etruscan remains are not very much advertised and quite shrouded in mystery. According to Giovanni Feo, researcher and expert of Etruscan civilization, this is likely because these people were not native from central Italy but migrated from the Near East, and historians of the likes of Dionysius of Halicarnassus, Greece-born but acquired Roman citizen, author of the famed History of Rome, were not too keen on showing too much of an Etruscan component in Rome’s birth.

Already in the first century BC, Etruscans were almost entirely removed from pre-Roman history, Dionysius of Halicarnassus living in an era when the Roman propaganda was in its heyday, and all the imperial aura and power was painstakingly being built up, battle after battle, myth after myth, to make the Eternal City shine in all its glory. With all this in mind, how could ancient historians take the risk and devote a great space to Rome’s last big enemy in central Italy, the Etruscans?

However, Latins didn’t erase all the good their predecessors did, instead, they absorbed and made it theirs. Result of this is that now, even though Rome’s mayors still seem to carry Emperor Augustus’ legacy of glorifying the city’s origins at Etruscans’ expense, we did manage to uncover some Etruscan remains to understand more of their rich civilization. And this is how, despite my initial intention of visiting medieval Viterbo, I ended up stepping back a couple of centuries prior to Popes’ years.

I’m not sure why, but wherever I go lately, I’m drawn towards mysterious places and secret customs, and Viterbo couldn’t be an exception.

I was happily wandering the maze of lovely cobbled alleys studded with gentrified, crumbling palazzi embellished with wrought-iron balconies overflowing with geraniums, when I ended up in cheerful Piazza della Morte (which means Death Square, in case you’re not familiar with Italian), where a friendly blonde lady came out of nowhere and lured me in a small shop of local products that was also the entrance to underground Viterbo.

It’s very recent breakthrough, in fact, the discovery of 5 km of subterranean pathway of Etruscan origins that, century after century, have served different functions, and of which only 100 meters are now open to the public. A small bite, but better than nothing.

Researchers so far have been able to pin down two reasons concerning the digging of these pathways, one being functioning as water mains, the other a little more “Turkish”, namely the creation of a sort of vacuum able to absorb earthquakes so that they would be less dramatic in the surface. This second explanation hasn’t been confirmed by historians yet.

The tour beneath Viterbo’s daily life was only 3 euro, so I didn’t really think much before agreeing on exploring this new piece of our ancient past.

While the theory of the water mains is widely accepted, some stairs, also of Etruscan origins, discovered undergroung make researchers think that those alleways were not aimed only at water but at people. Going down the stairs we can assume sacred areas were set there, where rituals sacrificing animals and sometimes humans were performed since, as we know, Etruscans used to “read”, apart from birds’ flight, also animals’ organs.

After the Etruscans came the Romans, then stormy years brought the Empire to an end and introduced Europe to the Middle Ages. During these lengthy wars and social transformations, the purposes of those dark passageways changed with time and became part of private houses. As a Papal city, Viterbo has witnessed first-hand the perpetual struggle between science and religion, and while the Guelphs (the faction supporting the Pope) won over the Ghibellines (faction supporting the King), alchemists, ancestors of our modern chemists, kept working secretely, precisely in these underground passageways, often used as labs for experiments on many things, among which the perpetual quest for the elixir of life and the philosopher’s stone.

As it happens, often official historical versions choose to omit how things really went, or at least “soften” what is aimed to be the official account. Towards the end of the tour, an anecdote was about to color my experience further. I already told you about the constant fight between science and religion, and here I learnt something I didn’t know nor suspect. In Viterbo lived and preached the only Portuguese Pope of Christian history, John XXI, who was a man of science before becoming man of God. After being nominated pope, he didn’t stop from performing his experiments, and one day, after deciding he wanted to discover the “sparkle of life”, he set his palace on fire by lighting up a fuse with a substance similar to glycerine. The palace blew up and he died symbolically trying to unveil the secret of life. Obviously, in line with the Vatican’s habit of keeping their dirty laundry in the family, the official account of his death says that the roof fell and he happened to be underneath.

Towards the exit, we paraded along a creepy stream of torture instruments that apparently were employed in the square just above our heads. “Oh that’s why this square is called Piazza della Morte,” I naively asked, “because they used to torture and execute people in there?” “Oh no,” came prompt the guide’s answer, “the name is a tribute to our Confraternity of Death!” Again, how cheerful.

If before the underground tour Viterbo was giving me a sense of unease, afterwards I’ve had a sort of confirmation that sometimes our feelings do have some ground. Probably it’s just me attracting mysterious tales, and very likely the other (few) tourists hanging around the town didn’t have my same impressions. Whatever the reason, Viterbo did convey a sense of shadiness, but I would love to go back, either to have this sensation confirmed or just to explore a brighter, more modern side of the city.

From Rome’s Trastevere (railway), Ostiense (metro B and railway), San Pietro (railway) and Valle Aurelia (metro A and railway) stations there’s a direct train (FM3) that takes about an hour and forty minutes to take you just outside the city’s gates, either Porta Romana or Porta Fiorentina station.