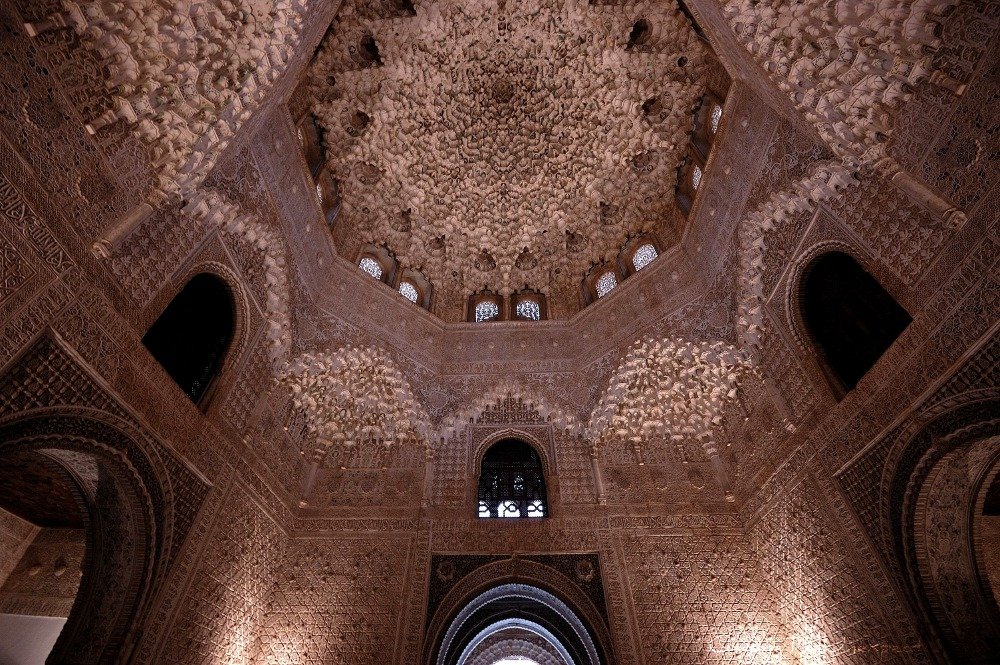 I’m always fascinated by history, society, and art, and when these appear as a combination of styles and civilizations, my passion gets a new spark. If, like me, you love eclectic patterns and expressions in art and society, go to Granada’s Alhambra and your wanderlust will be appeased for a couple of hours.

At the Alhambra, one of Granada’s main landmarks, my body was roaming along with my mind, and after some five hours walking up and down, eastward and westward, analyzing every detail three or four times, having gone past the military area of Barrio Castrense inside the Alcazaba at least five times because my cousin somehow decided there was a tower we hadn’t properly visited, my legs felt as if I had just gone through an intensive gym session.

What is and What to See at Granada’s Alhambra

The Alhambra is a spectacular complex of royal palaces, military areas, fortress and annexed towers, and stronghold started in the first half of the 1200s. By bus, it’s about ten minutes away from Granada city center, and the very frequent small bus devoted to it goes past all the main central stops.

Once at the Granada’s Alhambra, the first mandatory step is the Nasrid Palace, comprising of three main palaces built in different periods: Mexuar Palace, commissioned/inhabited by Ismail I (1314-1325) and Muhammad V (1362-1391), under the rule of whom the Nasrid sultanate lived its heyday and who commissioned also the Palace of the Lions and Comares Palace, where he replaced Yusuf I (1333-1354), the seventh ruler of the dynasty, and who actually commissioned the palace.

The Palaces of Granada’s Alhambra

The founder of the Nasrid dynasty was Muhammad I al-Ahmar, who installed his court on the Sabika hill in 1238 and began with the construction of Granada’s Alhambra. The complex is magnificent, there’s hardly another term that can define it. Beautiful buildings surrounded by equally wonderful and well-kept gardens.

Needless to say, the Nasrid Palaces are a feast of Islamic script and simple patterns, subdued blue, white and golden hues, the mesmerizing intricacy, and the icon-less modesty that define this religious art. The last sultan of the Muslim dynasty that ruled Granada was Muhammad XII, and on January 2nd, 1492 the Alhambra surrendered to the Catholic Monarchs.

The Nasrids had repeatedly sought help from the Marinids of the Maghrib to face the pressure from the Christian armies, but the crisis in the Maghrib itself and the marriage of Castile and Aragon kingdoms through Isabella and Ferdinand in 1469 determined the end of Granada’s Moorish period.

During those centuries the Moorish dynasty and their Catholic successors devoted their best energies to decorating their dream palaces, leaving posterity with illustrious samples of Islamic-Christian eclectic style.

⇒ Check out more places in Europe to visit in Spring

Just beside the buildings where the Nasrid members liked indulging themselves in luxury, lies the Palace of Charles V. After his marriage with Isabella of Portugal in Seville, in 1526 he visited the Alhambra and decided to build here his residence, an austere construction planned on a 63-meter square containing a circular patio that consists in two levels: the lower formed by a Doric colonnade and the upper floor by a stylized ionic colonnade, both levels organized following the standards of the Roman Empire’s architectural style.

What makes Andalucia so beautiful and interesting to explore is indeed the lovely collaboration of artistic trends and the tangle of personalities that contributed to leaving such a diverse array of sights and emotions. The masterpiece that we can see today was built in spite of the constant skirmishes between different powers. Visit other cities in the region, such as Seville, Cordoba, Malaga, and Cadiz, to know more about the local history, culture, and what foreign invasions have left.