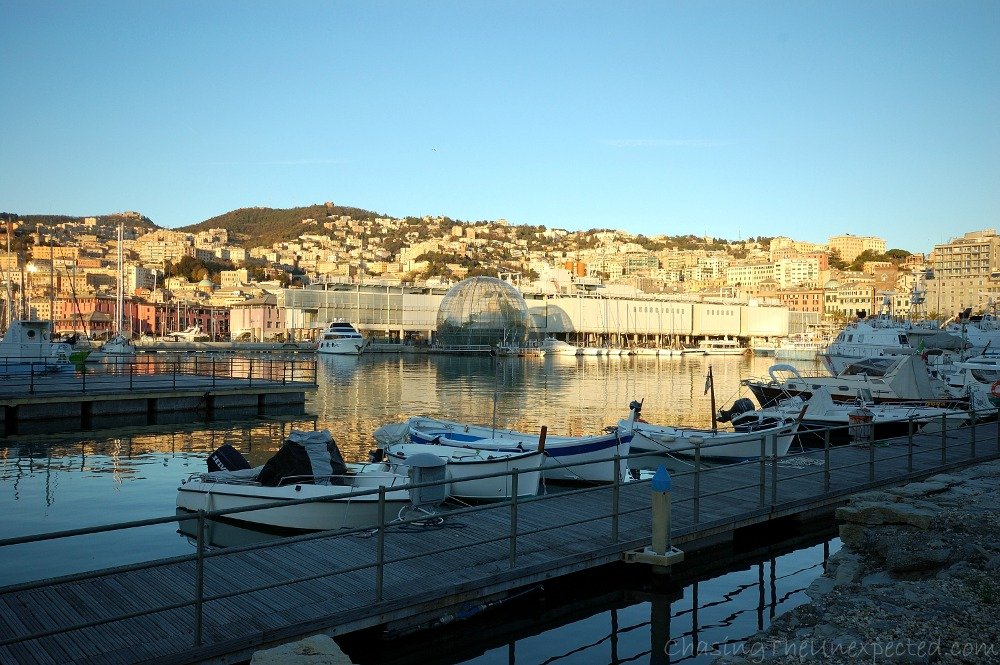 After my 3-day stroll in Liguria to visit the Cinque Terre, and on my way back I stopped in the region’s capital, Genoa, for a day. I got so swept away by work and travel that somehow my words and photos on this vibrant Italian city were postponed indefinitely, until now, that after Thailand and London, I’m in Brazil, chilling out, taking my time, enjoying the benefits of a fantastic yoga course and getting mugged (a post about it will come out soon, promise).

This was not my first time in Genoa, but I had never had the occasion to stop long enough to appreciate what at least its very city center has to offer.

Lucky me, one of my childhood friends, Mario, has been living and loving Genoa for the past 15 years, so I can totally say I had an exceptional tour guide for the day.

I arrived with the train from Levanto just in time for lunch, so after Mario’s special shrimp and mushrooms pennette, together with his girlfriend Alessandra we were off to explore Genoa, the whole city, or maybe just the medieval center, or maybe also Nervi, “you NEED to see Nervi district, it was the fishermen’s neighborhood!”, “but maybe in one afternoon it’s not possible, you risk to end up not seeing anything properly”, “maybe we just do the city center this time, there is the beautiful San Lorenzo Cathedral,” “but you REALLY NEED to see Nervi!”, “You can’t see anything in one afternoon, can you not stay for a week?”.

“Ok, Mario, calm down and breathe.” Despite Alessandra’s efforts to convince him into tackling only one neighborhood properly rather than the whole city in one afternoon, and my promises that I will come back as soon as I could, Mario didn’t give up on telling me that one day wasn’t enough, that Genoa has so much to offer, that it’s one of the most underrated cities in Italy (true!), that he had a spare room where I could stay as much as I wished and that I REALLY NEEDED to see Nervi. With this refrain echoing all the way, we started exploring the city center. For as much as I would have loved to see Nervi, I thought that for a first, thorough time, I couldn’t really skip Europe’s largest medieval borgo where Andrea Doria, prominent political figure in Republican times, had his own house, where regional commerce has fluorished in the past centuries making the city a wealthy Maritime Republic in constant struggle against the others, mainly Venice, and where Marco Polo (a Venetian) was imprisoned on his way home from China, and from where he dictated Il Milione to Rustichello da Pisa, a fellow prisoner in the jails of San Giorgio Palace.

The building where Italy’s first travel writer was kept is San Giorgio Palace, originally built as the seat for the Council then converted into a bank, San Giorgio Bank, one of the first financial institutions of medieval Italy. This was the first palace to hold a strictly public function, in a city where authorities have always striven to keep the secular power well separated from religion. Genoa has always been so proud of its status of secular Republic (hence its nickname “The Proud” or “The Superb”) that its coat of arms featuring St George red cross held by two griffons appears even on churches’ facades.

Admittedly, you will never see an ugly city, or town, or village, or hamlet in Italy. We might bodge our political leaders, we might spend 50% of our time complaining, but when it comes to beauty and style, sorry France, this is our playground.

Genoa is not an exception.

Even its smallest carrugi (alleys) exude the typical vibe of a well experienced place where history was made, not just witnessed.

Every building we went past, Mario has some anecdote about it, all dating back some centuries, when Genoa was in its heyday, almost as if he (Mario) was already there, shaking hands with Andrea Doria and fighting the Venetians. So we went past San Giorgio Palace, where Marco Polo was imprisoned, the Old Port where Genoa commercial activities were born, the alleys where hookers are allowed to stay and finally San Lorenzo Cathedral, where Mario pointed at a small marble detail under a column on the facade: “Do you see this? It’s a dog. Do you know why? Because when they were building the Duomo there was always a small dog staring at the workers, so somehow they wanted to make it part of the building.” I’m curious to know if any tour guide would tell me this story.

Little by little, anecdote after anecdote and building after building, the time for me was running out and I was supposed to head to the new port to board for my 13-hour ship journey back home, in Sardinia. Before leaving, however, there was something I really needed fulfilled: my gluttony.

Since I had decided to spend a day in Genoa, my most enduring and persistent thought was that I had to eat local delicacy farinata. Very simple and certainly born as poor dish, farinata is made with chickpea flour, olive oil, salt and water. As it was already late, we struggled to find one, but in the end I managed to buy a piece of farinata and a piece of cheese focaccia. Happy that my dinner for the trip was set and looking forward to chilling out in my cabin with my still warm meal, now I was ready to go.

On our way to the port, Mario, as proud as the city itself, repeated another dozen times that I should come back because in one day I could barely see the surface of what Genoa can offer. I believe him, and a new trip there is already on my bucket list.