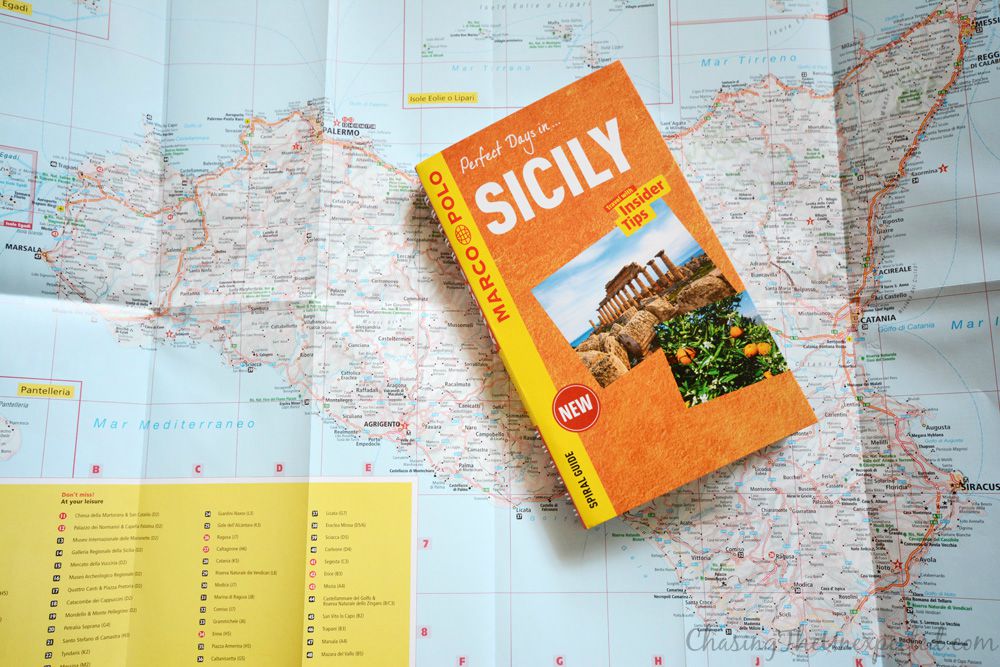 Confession time: in all my wanderings, the country I have probably explored less is my own, Italy. This is why when I received a wedding invitation from a friend of mine from Sicily I grabbed my Marco Polo Sicily Guidebook, packed my new swimwear and summer dresses and got ready in a heartbeat to enjoy the gorgeous southernmost Italian island for the first time.

Truth be said, even though the guidebook does give great tips on where are the best beaches, since my stay was short and it was really my very first, with such a rich history and culture Sicily boasts, I chose not to sport my new bikini but immerse myself in Greek ruins and cathedrals instead.

My trip kicked off in Agrigento, because this is where the wedding was going to be celebrated, in the fairytale-like settings of Falconara castle right on the beach near Licata. Thankfully, the guidebook had a pull-out map included, because for as rich as the area is in history, it lacks on road signs.

As suggested by the book, my delving into Agrigento’s cultural wealth could only start from the storied Valle dei Templi, just because I couldn’t miss what the guide described with such words: “Strung, like pearls on a necklace, along a ridge beside the sea, the great Greek temples of Agrigento, ancient Akragas, are acknowledged as the finest in Italy and comparable with those in Greece itself.” Subject of a future photo essay, my tour of the Valley of the Temples has been memorable, and fate wanted that our tour leader for the day was Greek, nonetheless.

After meandering the narrow medieval alleys of Agrigento the city, dining on a delicious pizza with the traditional sound of drums of San Calogero festival in the background, and tucking into seafood delicacies in nearby sea resort San Leone, I checked Marco Polo Spiral Guidebook for some tips on what I could manage to see next before coming back to Rome.

As I expected, the choice among all the beauties Sicily could offer proved pretty tough to make.

The guide breaks down the region into geographical areas, and everywhere is a feast of natural wonders, historic sites and cultural landmarks, making it all the more painful to rule out some (most) of them.

Palermo, the capital, obviously opens the guidebook. Known as Italy’s “most Arab city” and glowing with the remnants of a stormy past, it the natural draw that I would have loved to visit, but since it was too far from where we were, we kept on reading and perusing the plethora of choices until we finally managed to pin down a handful of places I had always longed for.

For as hard as the first skimming plan was, the decision-making process didn’t prove much easier: “shall we go to Ragusa, with its charming “Ibla”, the lower part of town, rebuilt after the 1693 earthquake retaining the traditional medieval-Arab style and new baroque buildings, Piazza Armerina, to see its baroque central district and world-famous Roman mosaics of nearby Villa Romana del Casale, UNESCO’s World Heritage site, or Caltagirone, also UNESCO-listed, to admire the local colorful ceramics?”

Finally, in a burst of strength of mind and determination that best defines us Italians, we opted for Catania. Described by our guidebook as an ancient Roman settlement overshadowed by the Etna volcano and boasting a “grandiose baroque architecture, wide boulevards, a cosmopolitan atmosphere and a thriving entertainment scene,” we felt we just couldn’t miss it. Between a piazza and a cathedral, we also found the time to shamelessly tuck into local delicacies, from the savory arancini to the sweet cannoli to the reinvigorating granita (flavored crushed ice) to cool down and face the unforgiving heat in the proper traditional way.

Marco Polo Sicily’s guidebook wraps it up with a “10 Reasons to Come Back Again” page that instead of dishing out the main landmarks and attractions, manages to lure you in the beautiful island with unique and unconventional arguments, from experiencing working with fishermen to enjoying a Greek tragedy performed in an ancient theater. As for me, my stay was definitely shorter than I would have liked to, and apart from the myriad of places I still need to visit in Sicily, I would go back even to simply soak in the spirituality of madonnas-studded streets, be pleasantly dwarfed by an imposing Greek reminiscence and enjoy the ceremonial and somehow vintage deferential kindness of the locals.