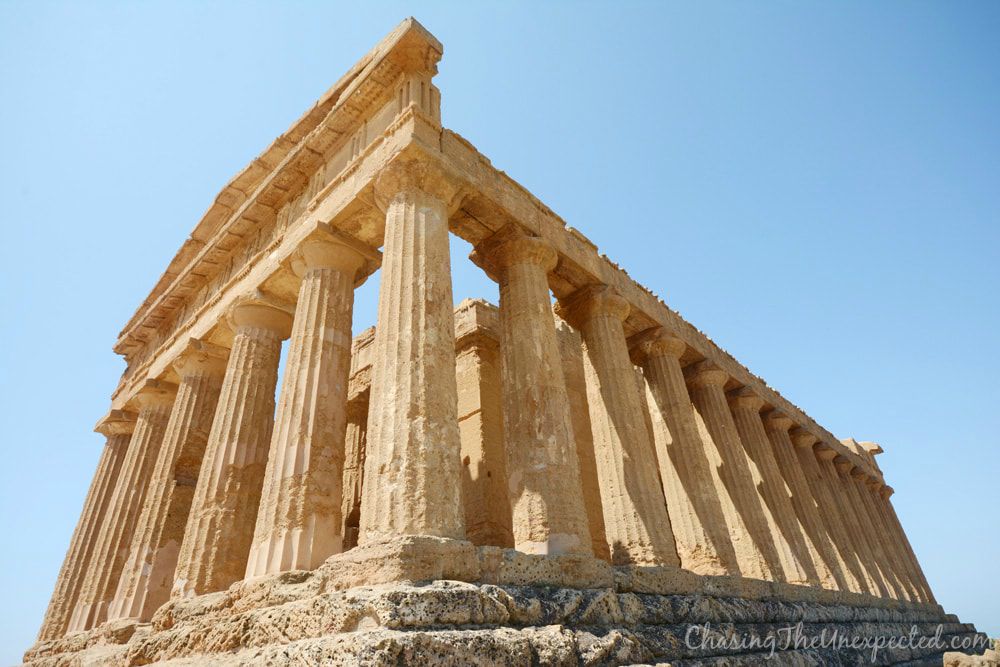 Many are the things you can’t afford to miss if you go to Sicily for the first time, and one of these certainly is Agrigento Valle dei Templi, in English, Valley of the Temples.

Declared World Heritage Site by UNESCO in 1997, whether you are a history buff, a photography lover or simply a passionate traveler, the Valle dei Templi will deliver whatever you are expecting.

Located a stone’s throw away from the city of Agrigento along Sicily’s southern coast, the imposing ruins of a splendid bygone civilization command the view. I was there mid-June so summer was already in full tilt, meaning that we started melting already early morning.

Similar to Sardinia in landscape and lack of road signs, this part of Sicily will enchant you for its wilderness, and as soon as you reach the longed spot, in our case the Valle dei Templi, you will be confronted by Greek ruins, considered among the best-kept in Europe and compared only to the ones in Greece itself, spreading as far as the eye can see. The ubiquitousness of cactus plants completes the Mediterranean scene.

It’s called Valle dei Templi (Valley of the Temples) because it was precisely this, a land devoted to worship and spirituality to serve the Greek colony of Akragas founded in the 6th century BC where now stands modern Agrigento.

Today we mainly see the remnants of such devotion, with most of the majestic pillars rescued from negligence and oblivion by some history lovers. The best-kept vestiges of the whole archaeological park belong to the so-called Tempio della Concordia (Temple of Concord), a name that bears no resemblance whatsoever to the original title, and of which we still don’t know who it was devoted to.

The reason why this temple, unlike the others, has arrived to us so well-preserved is that it has been used and adapted to the spiritual needs of the differents inhabitants of the area throughout the centuries. This, however, it’s also the reason why we don’t know who was the god it was initially built for, as the following cults and rituals have made changes and erased all the original carvings and possible inscriptions that would have helped us identify the original proprietor.

Valle dei Templi has been the favorite place for many noble families to build their opulent dwellings and, in more recent times, preferred target of unauthorized development. Fortunately, it seems that all illegal buildings have been cleared out and/or incorporated by the state, while the older mansions renovated and transformed into either hotels or venues for events and exhibitions.

Thinking about going to Sicily? Here are some pieces of information that can turn useful.

Practical tips for a visit to the Valle dei Templi

Wear comfortable shoes. As the name suggests, this is a valley, and while you are not going to walk across the whole land, in almost two hours you are going to take a pretty challenging hike, hence I suggest you wear either sneakers or whatever you deem is your most comfortable footwear.

Wear a hat and apply sunscreen. If you are going during summer, the scorching sun will most likely burn you, and this is why I highly recommend you apply sunscreen and bring a hat. In case you don’t already own one, you can buy it for 7/8 euro from the stands at the entrance of the landmark. I don’t have a particularly sensitive skin, yet I applied my sunscreen and bought a hat before entering, 7 euro greatly spent.

Hire a local tour guide. I’ll be frank here, the Valley of the Temples is a magnificent cluster of remnants from the Greek presence in Italy, one of those not-to-miss places for anyone visiting the area, but let’s face it, if you are not a history buff, chances are that you are not going to understand much about the history and original purpose of the place. I’m a sort of history freak myself and I’m sure I would have wasted my visit if I hadn’t hired a guide. You will find local guides offering tours in every language at the entrance and the price for a 2-hour tour is 10 euro per person.

Practical tips for travelling to Sicily

Rent a car. I haven’t travelled all around Sicily, but especially in the area around Agrigento public transport is seldom seen, so your best bet is to rent a car. At Catania and Comiso airports you will find many car rentals, such as Hertz. I would also advise not only to carry a good map but also a smartphone with Google Map as the lack of road signs seems to give them the status of precious commodities.

Ask locals. Don’t be afraid to ask for information, as an Italian myself, I was pleasantly humbled by the old-fashioned willingness of Sicilians to assist us any way they could.

Learn some Italian. While in the most touristy areas you will find English-speaking people, as soon as you get off the beaten track this will become harder so either you do a quick crash course of Italian before traveling or you carry a pocket-size dictionary with the most useful emergency sentences in it. Or both.