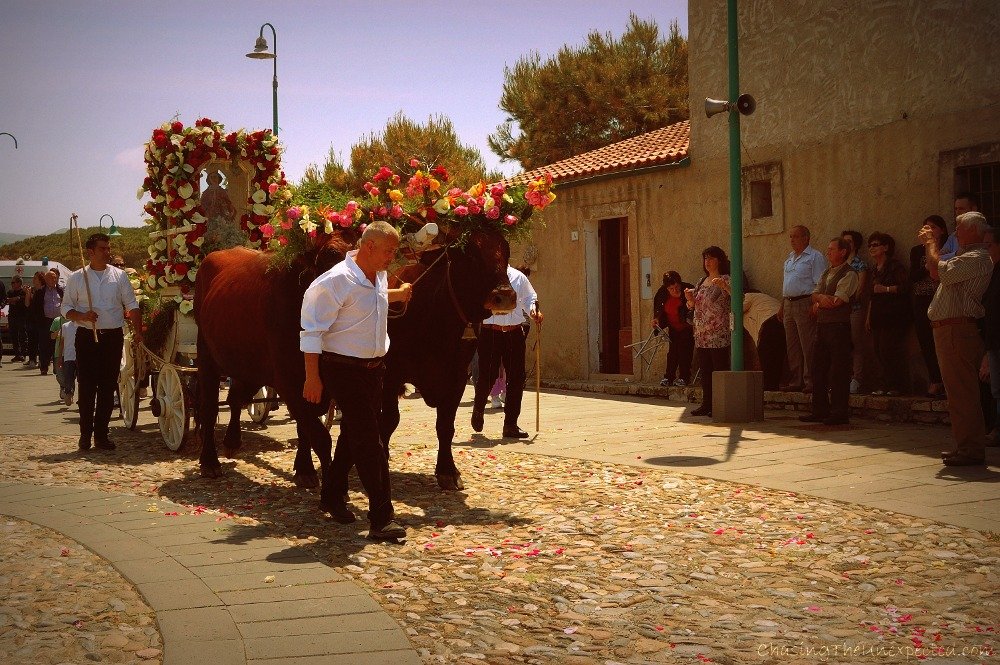 The smartest thing the Catholic religion could possibly think of has been to incorporate pagan rituals into its own ceremonies. Banning ancestral cults altogether might have provoked too many protests and caused general unrest, so why not take the lead?

This is how many ancient festivals in Sardinia, especially the ones locals have always organized at the end of the winter to welcome the new season, have survived the Catholic wave and managed to reach our times almost unscathed.

Sure, now bulls and horses lead a church-bound procession, white-clad men carry a saint on their shoulder, instead of maybe their working tools or the first produce of the harvest, the message has been slightly diverted, but the deep inside everybody is thinking the same: finally, the warm season has arrived.

This small village, blessed with mild temperatures all year long and with an azure sea lapping its coast and making you feel at peace with the universe, is not the only one paying tribute to Saint Catherine.

In France, in fact, the saint is celebrated in an even wider way. Considered under the protection of Saint Catherine, in the Middle Ages girls showed their devotion by making beautiful headgears aimed at her statue for the celebrations taking place every November 25th.

When married, young women used to leave the group, and people started calling “Catherinettes” the ones who after 25 were still single.

While this practice has now faded away, every November 25th unmarried women still celebrate this festival by wearing Saint Catherine’s headgear, and on that day they are still called Catherinettes, although probably, if in the Middle Ages being single at that age was a problem, now very likely it means that such young women have a promising career awaiting them.

Coming back to Sardinia, in aptly named Santa Caterina, the feast actually starts about 15 km away, in another town called Cuglieri, from where horses, bulls, and people walk all the way down to the main destination: the church of Santa Caterina.

They leave at 7 am to arrive around noon. We can say with no hesitation that the bulls used for this feast were born under a good star: thanks to their being so good-looking, they are never used for any kind of agricultural or farming activity, they are spoilt and looked after all year long, and they spend their days grazing and doing pretty much what they please.

To the extent that, in all their 500 kg of beauty spruced up for the occasion, in the middle of the procession they turned where they turn every morning to go to their owner’s land, and four men had to use all their strength to make them go straight down. What do they care about Saint Catherine? They know they are the stars of the show.

Before the parade arrived, young girls sprinkled rose petals in front of Santa Caterina church, and bulls, statue, Christ, and the stream of faithful did the tour of the recently renovated worship place three times, while horses were lined up as if to fiercely guard them. After the parade, people attended the holy mass, and the bulls finally got to rest and eat, their horns liberated from the flowers.

Along with open markets, this kind of local feast is among my favorite activities. What’s a better place for chatting, updating on the latest gossip, and seeing people you haven’t seen for ages even though your village counts only 500 dwellers?

As it happens for every festival, a small fair was set up for the occasion, and local farmers and handicraft artists came from their town in the hope to sell their products because without them it’s not a real feast.

The unmissable Torrone of Tonara, the best torrone made in Sardinia, without sugar nor glucose syrup but only honey and almonds, handmade soap, bells for sheep, nuts and sweets populate some of the main stalls: the perfect picture for a perfect Sunday morning with summer just around the corner, immersed in authentic village life and tucking into genuine homemade delicacies.

16 thoughts on “Saint Catherine of Alexandria’s Festival in Sardinia (Bulls, Horses, and Roses)”