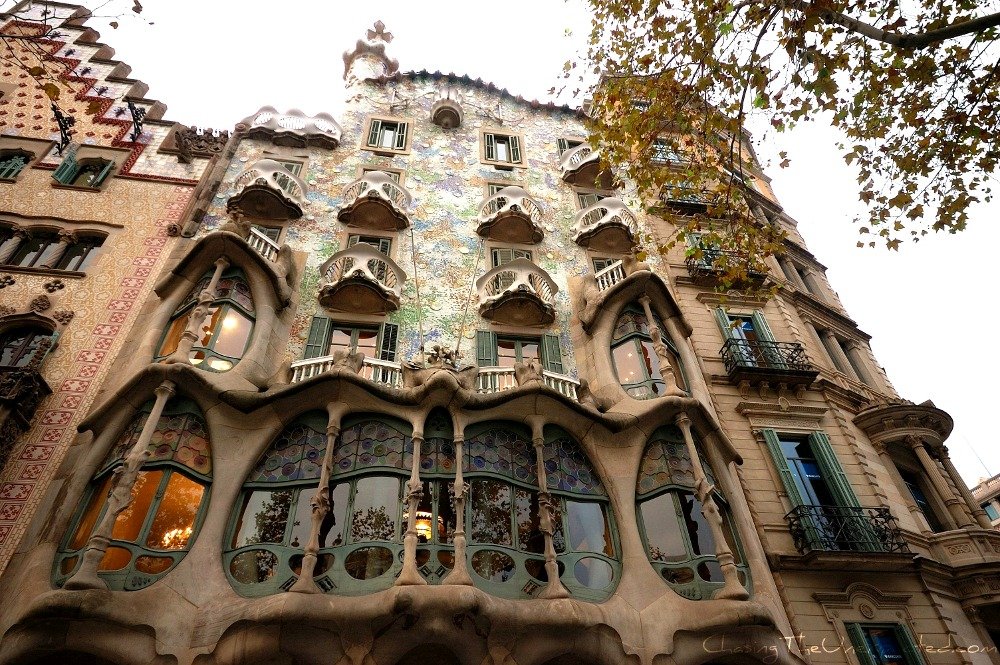 “Those who look for the laws of Nature as a support for their new works collaborate with the creator.” – Antoni Gaudi.

This is possibly the quote that best represents the work and philosophy of this unconventional architect and one that made me want to discover and explore Gaudi’s buildings in Barcelona.

My decision to go to Barcelona was influenced since the beginning by my curiosity towards Gaudí’s outlandish architectural style but, as a big fan of anything that has to do with Nature, finding out that he loved reproducing the shape of natural elements in his work made the trip even more intriguing.

I took a tour devoted to local architecture and the environment where Gaudí worked and his genius was shaped with Context Travel.

At 9.30 am I met art historian Biel Heredero Serra at the number 132 of picturesque Passeig de Gracia, in the city centre, near La Rambla and the beautiful La Boqueria market, where our journey through Barcelona’s controversial past and fascinating art started, Casa Fuster.

Now a five-star hotel, Casa Fuster had been originally commissioned by the Fuster family to architect Luis Domenech Montaner, one of the greatest exponents of the “Modernisma” movement, as Catalans like to keep it, in its original language. The first element you will notice if you happen in front of this now luxurious hotel is its eclecticism, where gothic elements will sit side by side with Roman-looking columns and baroque-style details.

Book your Gaudi Tour in Barcelona with Take Walks to visit Casa Batlló, Park Guell and the Sagrada Familia

If you can spend some more time in the region and want to take a day trip from Barcelona, Montserrat offers a fascinating culture and a breathtaking landscape. Among the other places to visit in Spain, we suggest you don’t miss the gorgeous Andalusia region in cities like Cordoba, Granada, Seville and Cadiz. Also, if you want to know what to do in one day in Madrid, click here.

Before moving on to the next masterpiece, Biel made a step back in the past and told me that where we were standing at that moment was actually a neighboring town, only later incorporated into Barcelona territory during the urban planning of the end of the 19th century, when the now-famous “Eixample” (Enlargement) was added to the beautiful Barrio Gotico (Gothic Quarter), the only initial district of the old city and one of the things to see even if you only have 2 days in Barcelona.

Our journey went on through the greatest masterpieces of Barcelona architecture that, like it or not, are unique the world over.

After Casa Fuster, we stopped to admire Casa Comalat, a fantastic work by Salvador Valeri i Pupurull, clearly influenced by the organic shapes that inspired Gaudi himself. In fact, as soon as we saw Casa Comalat I thought it was Gaudi’s work. But as a matter of fact, we were passing by artistic styles, religious symbols, separatist movements, riots, and fights for independence.

I knew something about the past battles between Catalonia and Castilian Spain, I just didn’t know they were still so alive in the public mind. And certainly, as Biel pointed out, “while before it was mainly cultural and social, now with the current economic crisis the struggle has acquired a whole new identity.”

The tour introduces the most important figures that have contributed to making Barcelona so beautiful and one of a kind, and tourists can consciously wander the streets of the city and enjoy names of the likes of Josep Puig i Cadafalch and his beautiful creation Casa Amatller, commissioned by chocolatier Amatller, just beside Gaudí’s surreal Casa Batlló, architect Antoni Rovira i Rabassa and the already mentioned Salvador Valeri i Pupurull and Luis Domenech Montaner.

Chasing Gaudi’s buildings in Barcelona with an architecture tour

Before admiring the colors and the shapes of the front façade of Casa Batlló, our Gaudi architecture tour took us to explore Gaudi’s masterpiece, Casa Milà or, as locals like to name it, La Pedrera, at the number 92 of Passeig de Gràcia.

I can’t stress enough the importance of visiting La Pedrera for anyone who heads to Barcelona and wants to learn more about Gaudi.

Casa Milà is a house commissioned by entrepreneur Pere Milà and entirely designed by Gaudi, both the interiors and the exteriors. And you can easily see that as soon as you walk through the door.

At the beginning of the 20th century, the district of the Eixample, which includes also Passeig de Gràcia, was considered the center of Barcelona’s expansion, and this is where many of the best examples of “Modernisma“-style architecture were built.

On the ground floor of La Pedrera, where Caixa Catalunya, which bought it in 1986, set up a museum to explain Gaudi’s genius, I found out that the artist used to find inspiration in Mother Nature elements: human body, trees, shells and anything easily available on planet earth. In fact, don’t the columns of Casa Battlò look like human bones? And don’t the balconies of the same building look like skulls? As far as I’m concerned, Gaudi’s nature connection is enough for making me like him.

Mr. Gaudi, as a proper artist, didn’t really have a very friendly personality, actually according to Biel was “quite grumpy and greedy”. “Do you know how he died?” he asked me as proof of what he was talking about. “He was hit by a tram and was so sloppy that the police didn’t recognize him and mistook him for a homeless, hence since it was 1926 and social welfare didn’t really involve the indigent, the help didn’t come promptly. Of course, when they realized who he was, it was too late.”

After feeling outraged that it became a case only because the victim was Gaudi, I felt very saddened by his early and unnecessary death, and for all the unnecessary deaths that used to happen, and unfortunately still happen, this way.

Gaudi might have been grumpy, but he was a genius. Proudly, Biel made me notice the cheap material he used for the decorations, such as broken glass and bottles. “It’s very cutting-edge,” he explained. “It’s like the forerunner of modern recycling.”

The fact that, after La Pedrera was completed, the owner complained because he couldn’t find furniture to adapt to irregular and asymmetrical walls, today only adds charm to the genius.

From the beautiful roof of La Pedrera it’s possible to catch a fleeting glimpse of La Sagrada Familia, the church that is considered Gaudi’s absolute masterpiece, although he didn’t even see it completed, and one of the main Barcelona attractions. After having admired some of the precious works of Barcelona’s most famous architect, it just wouldn’t have sounded right to leave the city without seeing La Sagrada Familia. I stayed in Barcelona for only one day, so I didn’t have enough time to visit the church inside, also because when I arrived the queue was still too long.

But I’m glad I did go, I managed to take pictures of the church all around, a truly breathtaking masterpiece that is now a great reason for me to go back to Barcelona.

Address of Casa Milà: Passeig de Gràcia 92.
Opening hours of Casa Milà: From Monday to Sunday, Mar. – Nov. from 9 am to 8.30 pm, Nov. to Mar. until 6.30 pm (last admission half an hour before closing time), and for the night visit 9-11 pm. Closed on December 25th. Opening hours change with the season, to know the time before your visit check the website https://www.lapedrera.com/en/visitor-information.
Entrance fee for Casa Milà: Adults € 22, students, disabled and over 65 € 16.50, free for children under 6, € 11 for children from 7 to 11.

Barcelona is included in the Eurail Passes so if you are traveling around Spain and Europe it’s very easy and convenient to do so by train.

33 thoughts on “Exploring the fantastic Gaudi’s buildings in Barcelona”