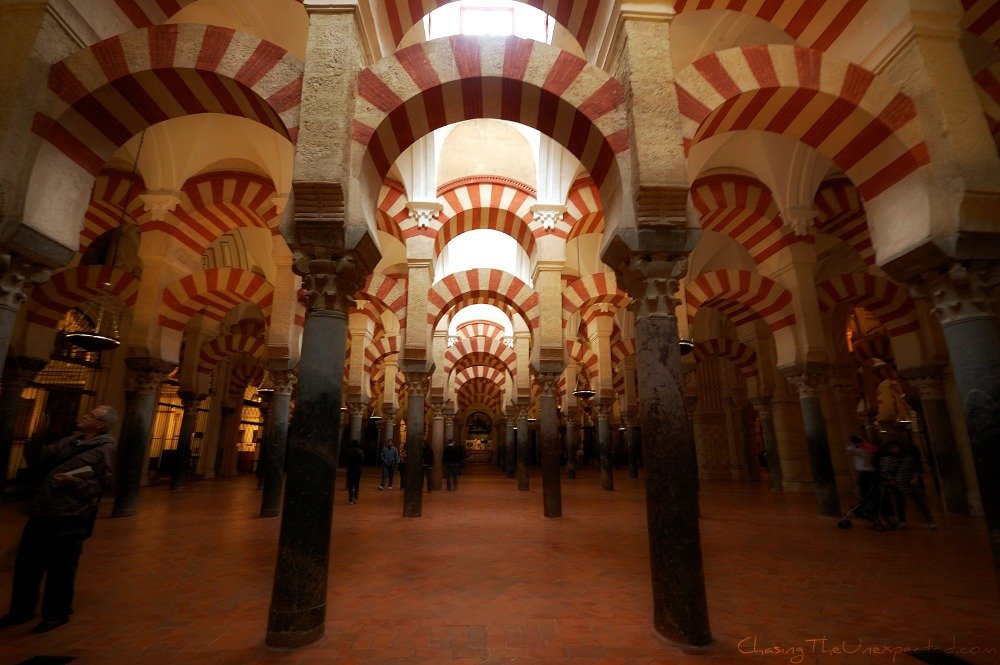 After Seville and Cadiz, the third stop of my trip to Andalucía was the beautiful Córdoba. My 3-day stay was mainly focused on the Jewish quarter of Cordoba, the charming and historic neighborhood of La Judería.

If Granada boasts a style that mixes Moorish and Christian influences, Córdoba combines these two approaches to art, society and religion and embeds them in the old Jewish quarter of La Judería.

Here the fascinating mosque-cathedral Mezquita lies next to a Roman bridge, the Alcázar de los Reyes Cristianos, citadel-residence-fortress of the Christian Kings that now is one of the main Córdoba’s landmarks, and the city’s old synagogue in Calle de los Judios.

Arriving in Córdoba by coach from Seville meant to us a shift from modern-style station and roads to a maze of narrow winding alleys, where only local taxi drivers get around easily.

Córdoba, pretty much like all Andalucía, wakes up slowly and taking her time, with workers bothering going to breakfast around 10-ish and tourists willingly adapting to local lifestyle. Shopkeepers bring out their display of flamenco dresses and loud jewelry, and the day officially starts.

Imperatively, the first site to visit at La Judería quarter, admire and photograph is the Mezquita, one of the most impressive examples of Islamic architecture in the western world. The beauty of the complex is intimidating, the atmosphere inspires peace, the history competition and the struggle for hegemony. Not only a mix of Islamic and Christian patterns well describes this spiritual place, but a combination of personalities within the same Muslim world, as it bears features dating back to Caliph Abd-ar-Rahman‘s period, who founded the Umayyad dynasty and established Córdoba as the capital of al-Andalus commissioning its construction in 785AD, and to his successors Abd-ar-Rahman II, al-Hakam II and Amanzor.

The former mosque is now a Roman Catholic cathedral, and before being a mosque had actually already been a Christian Visigothic church on the ruins of which Abd-ar-Rahman started building the Muslim worship place. Studying the whole complex might take years, as it would mean exploring the different layers of history and unearthing a fascinating collaboration of religions, tastes and an aesthetic that blends Roman, Gothic, Byzantine, Syrian and Persian elements, the first example of the so-called Califal style.

After re-conquering Córdoba, Christians transformed the monument into a church again and, although leaving pretty much intact the Moorish architecture, built a cathedral inside with a great central nave facing a finely decorated altar.

Being La Judeíra the Jewish Quarter, the presence of the synagogue was pretty obvious. Of simple decoration, its walls empty, with only the ever-present menorah as an ornament, symbol of Jews’ traditional austerity that in the 11th and 12th centuries integrated with Islamic rules and Christian customs, organizing their lives in an almost walled citadel on the border with the Alcázar.

The first thing visitors notice after stepping over the threshold of this residence-fortress at the heart of La Judería neighborhood is the idea of prestige its builders meant to give to it. Dream gardens, simple yet beautiful fountains that pour their waters into crystal clear pools, carefully trimmed hedges and trees, and a massive statue, seemingly the portrait trend of the time, symbolizing the moment when the cardinal celebrated the wedding between the Kingdom of Castile in the person of Isabella I and the Kingdom of Aragon, Naples and Sicily embodied by its ruler, Ferdinand II of Aragon.

Both Isabella and Ferdinand went down in history as “the Catholic” due to their infamous support to the equally infamous Spanish Inquisition, the “holy” tribunal promoted by the Monarchs themselves in order to keep their Catholic image untarnished and their reign free from infidels.

Strolling about the Alcázar even only a small historical awareness can be painful: it was one of the first permanent courts of the Inquisition and the headquarter where the campaigns against the Nasrids took off until Granada was reincorporated to Catholic Spain in 1492, the year that saw also Isabella support Cristoforo Colombo’s travels that introduced the American continent to European rulers, causing the beginning of the Spanish colonization.

It goes without saying that any city we visit has been the theatre of events involving our ancestors, but while some rest in the scrap heap of history, others constantly make a comeback due to their immortal aftermath, either good or bad. Andalucía belongs to the latter category, as around every corner hides a name of heavy legacy, just like at La Judería.